My next literary venture is well underway. It is a tale shaped by these Covid times. As I write my book, I see unfolding the latest episode in this UK horror show. SKWAWKBOX keeps me informed as to the detail but the general thrust of events is one that I, like them, have been expecting. My task in these blogposts is to pass the parcel, as Alan Bennett wrote in the concluding pages of 'The History Boys'. Please do remember to pass on what you discover through reading this blog - however you see fit.


Lock-down in the UK arrived on Monday March 23, at least three weeks too late. Ten weeks later, we are being encouraged out of lock-down too soon for the health of the nation, prompted by neoliberal Tory concerns for the nation's wealth. Having made a similar mistake at the beginning of the crisis, they are apparently intent on repetition. Even more people will die needlessly. The economy will take
another hit as a second lock-down is forced upon them. And they will be left spinning the airwaves and the media in an endless attempt to conceal the truth from the masses who look to their government for leadership. These guys in power, who won their mandate to govern by cunning and deceit, will do everything in their power to avoid the charges of administrative malfeasance that should now be filed against them. And then there are the more specific charges warranted by the premature deaths of tens of thousands of British citizens.


Doctors and care professionals have accused the government of 'seeding' the virus among the most vulnerable by doing exactly that - after the SKWAWKBOX broke the news exclusively more than seven weeks ago and the NHS confirmed not only that it was happening, but that it was driven by central government policy.


That didn't prevent the government's denials - and it didn't stop Dowden and Powis today:

But it is still government policy to send confirmed-positive coronavirus sufferers back to care homes. The government's 'COVID-19 Action Plan for Social Care' on its official gov.uk website (archived this evening here) confirms it.


The 'action plan' is specific that the coronavirus status of some people being discharged into care homes is 'COVID-positive'.
The Tories will, of course, continue to tell the public that this is not happening - in spite of the fact that its own documentation confirms that it is.
And almost none of the 'mainstream' media will challenge them adequately and directly enough on it. So it's up to the independent media and their readers to make sure these facts reach the public consciousness.'

And this is a SKWAWKBOX post from last Sunday, 25 May:
'Johnson's disaster has been hammered - briefly but massively virally - by the official UK civil service Twitter account. Now at least three of his own behavioural science advisory group slam his disastrous press briefing performance
Boris Johnson was brutally put down earlier this evening by a short-lived but massively shared tweet published on the official UK civil service Twitter account. The tweet, which called Johnson and his ministers 'arrogant and offensive' 'truth twisters', was shared 33,000 times in the ten minutes before it was deleted - and was so widely shared that even the BBC could not ignore it.
And now at least three members of one of Johnson's own key scientific advisory groups - SPI-B, which is effectively the government's 'SAGE' on behavioural science and feeds into the full SAGE committee - have publicly accused Johnson of 'trashing' all their efforts to build public trust and cooperation in the government's anti-coronavirus measures:

Original tweeter Stephen Reicher wasn't finished, either. He continued his thread with a list of what Johnson had 'trashed' in the first few minutes of his defence of Dominic Cummings's trips from London to Durham this evening - and accused Johnson of not 'want[ing] to listen to science.
And of being so appallingly bad that the only way for the public to do the right thing was to ignore the government: 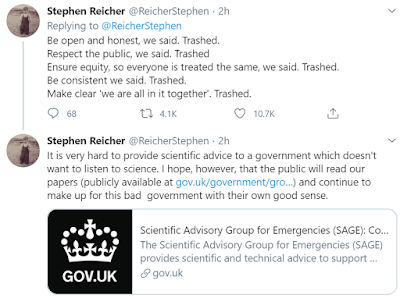 Such a condemnation from his own science team could hardly be more damning.
Johnson's desperate reliance on his handler has exposed his uselessness and bankruptcy to the nation.'

And this today from SKWAWKBOX:
'And now members of the full SAGE committee have followed suit, speaking publicly against Johnson's assurances that things have moved far enough in a positive direction for the lock-down to be eased and warning that - as the SKWAWKBOX has also flagged - the virus is far too widespread for measures to be relaxed.
SAGE member Professor John Edmunds said that any relaxation of the lock-down was 'taking risks' because of:

a very high level of incidence

of the virus in the population.
And, just as other members of SPI-B endorsed Stephen Reicher's verdict last week, other SAGE members have spoken out to agree with with Edmunds.
Wellcome Trust director Jeremy Farrar was emphatic, agreeing that the incidence of the virus in the community needs to be lower, with 'test, trace, isolate' (TTI) fully working - and added that the government's information and systems need to be trusted, seemingly a reference to the erosion of trust caused by the fiasco of the Dominic Cummings scandal: 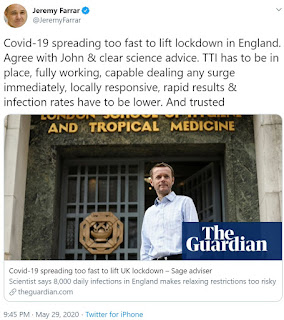 Boris Johnson's handling of the pandemic has been reckless from the beginning - from the failure to prepare before it arrived in the UK, to the decision to ignore World Health Organisation advice, to the continuing non-provision of personal protective equipment and the intentional return of infected patients to residential homes unequipped to isolate or treat them, through to the 'return to work' order earlier this month.
Tens of thousands of lives have been needlessly lost because of Johnson's actions and inaction and many more will be lost.
And that wilful endangerment - gambling with the lives of millions - continues. The SKWAWKBOX has accused Johnson and his helpers of murder and that assessment is only growing firmer.

Finally, the big picture - how do we compare with the rest of Europe in this war against Covid-19?
European death figures shame England's shambolic and ideologically-driven government
(SKWAWKBOX: Saturday 29 May)
Martin Keatings tweeted out the deaths in European countries published yesterday - and the UK's position shames Boris Johnson's appalling and catastrophic handling of the pandemic: 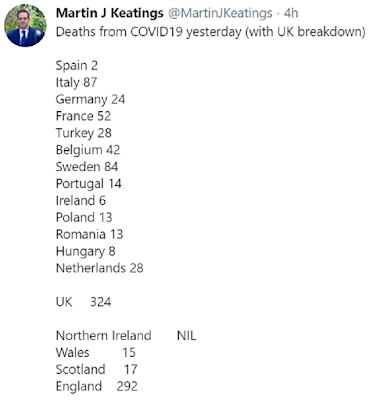 The UK saw almost four times as many deaths as former 'hotspot' Italy - and 162 times more than former disaster zone Spain.
But it is Johnson's catastrophe. Because Keatings also listed the figures for the UK's nations - and relative to their population sizes, England's death total yesterday was 67% worse than Scotland's, 9% worse than that of Wales - and infinitely worse than Northern Ireland's zero deaths.
And death numbers, hospitalisation numbers and ICU admissions have all risen in the last few days, at a point that suggests they stem from Johnson's insane decision to force millions back to work with no warning earlier this month.
Even the government's own scientific advisers are now warning that it is far too soon to ease the lock-down, yet Johnson continues his mad haste and his disregard for its consequences - except for secretly tripling temporary capacity for storing the bodies of his victims.
The evidence for Johnson's guilt is piling ever higher - but a simple tweet with a list of numbers is one of the most damning summaries you will find.'

Anyone proud of being British in these circumstances?

Well. I am proud of being part of the British resistance to this monstrous regime that hold the reins of power