It's now Sunday morning and as I reflect on the week that's passed I recall hearing the confirmation of the escalation in cases of Covid-19 in care homes. Channel 4 News had already been releasing stories from individual care homes that pointed to a crisis for around a fortnight beforehand. On Tuesday 28 April 2020, the Office for National Statistics (OFN) now issued statistics that indicated around 5,000 of our citizens had died so far in care homes from Covid-19 related causes.

Hugo Gye, deputy political editor of  the 'i' newspaper, reported on Wednesday 29 April 2020 that the government would be publishing a new more comprehensive daily count of how many people have died in care homes. I discovered this because I've just checked online to see if what I remember hearing on the TV news was not a figment of my imagination. We were going to be told on a daily basis, not only how many deaths in hospital there had been but also how many deaths had occurred in care homes. That's what I heard - and now I've read it too.


So what happened? Have you heard any updates? I haven't. The care home focus has vanished.


What we do have are diversionary stories of how the powerful prepared for politics after Johnson's
possible death in the intensive care ward. The nation is being deliberately nudged towards sympathy and compassion for the man who has faced death and won.

However, this man and his political advisor Cummings and the UK government they direct, are responsible for the policies and inaction that have directly led to the deaths of tens of thousands of our citizens.


Consider the figures in these tables below: 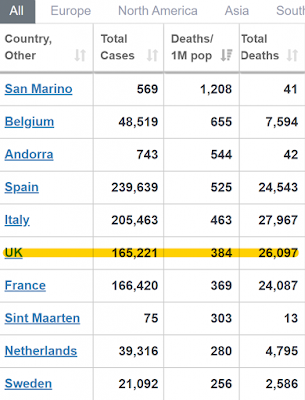 However, it is widely recognised that the UK's official death toll is far below the real figure, because deaths in care homes will represent half of all UK deaths. Even though the government has started to include some care home deaths in its numbers, the 'lag' in reporting them means that around 15 days of care-home deaths are not included.
Taking the cautious Financial Times analysis, which concludes that around 48,000 people have died of the virus in the UK, the table looks very different - with the UK leaping into second place, behind only tiny San Marino, with more than 700 deaths per million: 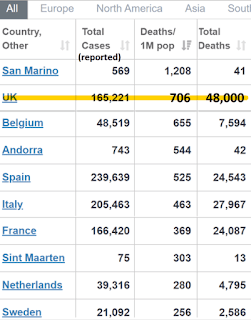 Even on the government figures, the UK occupies a shameful place in the table. The Tories had weeks longer to prepare for the pandemic than Spain, Italy or France - yet they have taken this country into far worse territory.
Territory that means tens of thousands of needless UK deaths.
But in reality, the UK is the second-worst in the world - and by far the worst major nation - in terms of deaths among its people caused by the virus.
The government and its supporters try to claim that 'some countries' measure in different ways, or have different geographies or population densities. But the UK is worse than every country in the world of any geography, any population density and any measurement system. Apart from tiny San Marino.
Boris Johnson and his government - through their 'herd immunity' insanity; their PPE failures; the insanity of sending C-positive old folk back to care homes; their rejection of the World Health Organisation 'test and trace' plan that saw South Korea eliminate the virus without a lock-down; their decision to allow sporting events to continue when experts were screaming warnings and their policy of allowing travellers from virus hotspots to enter the country with no checks - are responsible for mass fatalities.
Fatalies that other countries have shown can be avoided. Among your relatives, friends and colleagues.
And they are not finished yet.

They are far from finished.

Have you seen the size of Hancock's nose?

Health Secretary Matt Hancock claimed yesterday that he had hit and in fact exceeded his 'unprecedented' target of 100,000 coronavirus tests per day.
He didn't.
Hancock used dodgy accounting, moved goalposts and an outrageous scam to pretend he had hit his target, when in fact he fell abysmally short:
Moved goalposts
Hancock claimed his promise had been to hit 100,000 tests per day. But at the beginning of the month, the government was absolutely clear that the promise was to test 100,000 people per day: 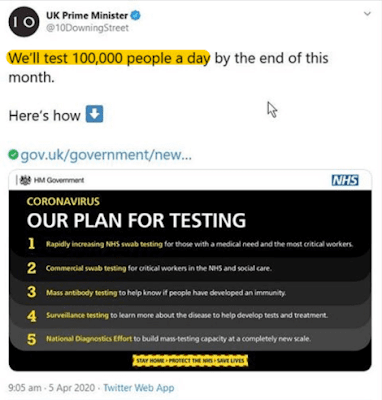 Not only did Hancock not test 100,000 people, in his desperation to appear to have hit his target he changed the accounting. He counted 40,000 tests simply posted out on the last day of the month as tests completed - even though the recipients wouldn't even have received the testing kits by the end of April.

The BBC claimed Hancock had achieved his goal, but had to include this damning info

And while he desperately posted out tests and counted them, people travelling to testing centres queued for hours - only for many to be told there were no tests left for them.
In the end, Hancock's claim overstated the number of people actually tested by more than 50,000.
'Audacious'
In order to try to make his fictitious 'achievement' look more impressive, Hancock claimed it was 'audacious' and 'unprecedented'.
Except it wasn't - because his boss had originally promised more than double that number: 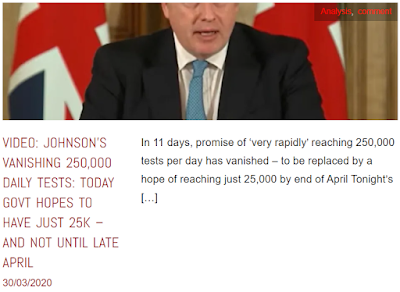 Three claims, three lies. A 100% 'success' rate in misleading the people to cover his backside - with the eager help of the so-called 'mainstream' media to promote fiction as fact.

Do not trust the mainstream media - keep an open mind - be alert for deception at every twist and turn as these guys seek to avoid the charge of administrative malfeasance - or worse.