A RISING TIDE OF ANGER

You can feel it as the language becomes ever bolder on Skwawkbox. Anger is in the air. It's out there in cyberspace. But for how many British men and women has the penny dropped? How many British households echo this evening to the sound of diatribes directed towards the PM and the Government?

Chaos and confusion as weapons against working-class people
(Skwawkbox: Monday 11 May 2020)


Boris Johnson's garbled and self-contradictory message last night was mocked brilliantly by comedian Matt Lucas, but it is anything but a laughing matter - and the chaos has continued this
morning, making Johnson and his excuse for a government even more guilty of the UK's shameful position as the major nation with the most deaths relative to its population.


Last night, Johnson told workers that they must return to work this morning unless they can work from home - ending the lock-down in all but the most peripheral sense and condemning millions of mostly low-paid people to run the gauntlet of infection on public transport and in workplaces. His exhortation to walk or cycle instead is utterly meaningless for the vast majority.
To rub salt into the wound of his gross mockery, the so-called guidance the government promised on the 'safe' use of public transport was issued at 2pm today, hours after people were forced to flood back into the streets, trains and buses - terrifyingly shown on Transport for London CCTV footage.
And the government has now said that its instruction to return to work was not meant to be implemented immediately, but rather on Wednesday. Maybe.
60,000 people have died so far because of this virus, perhaps many more - and the hands of Johnson and his helpers are stained with their blood. There will now be another 'spike' in a couple of weeks and thousands more will die - along with hundreds more health workers, teachers, transport and other front-line staff.
Using chaos, lies and misdirection as a weapon, the Tories are murdering people and using the media to cover their arses.
There is no clearer or truer way to say it.'

NHS and WHO deeply concerned about emergence of serious coronavirus disease in children, while SAGE committee has said masks should be worn in public. So Johnson's speech ignores masks and gives date for schools to re-open
(Skwawkbox: Sunday 10 May 2020)

In Boris Johnson's speech to the nation this evening, pre-recorded so it wouldn't disrupt his weekend, the Tory leader claimed again that his approach to relaxing the lock-down is 'driven by the science, the data and public health' and by the need to save lives - and not by 'mere hope and economic necessity'.
Johnson also talked of a journey 'down the mountain' of the pandemic, but even a cursory examination of the facts shows that the mountain is more likely to be made of bull****. Because Johnson's measures involve directly ignoring and contradicting the science - and will cost more lives.
No masks
Northern Ireland First Minister Arlene Foster revealed this week that the government's SAGE committee - its key scientific advisers - have concluded that the UK public should now be wearing masks in public settings.
But Johnson's speech made no mention of this whatever. Instead he told people to rely only on social distancing while increasing the situations in which they will be mixing.
only on social distancing while increasing the situations in which they will be mixing.
Back to work
While the government's existing advice - also supposedly based on the science - was that people should work from home if possible but stay home from work regardless, Johnson is now ordering those who cannot work from home to return to work.
A situation that will mainly apply to the low-paid and to people from ethnic minorities - the very people that the science and the data show are far more likely to be killed by the virus.
And back to school...
Johnson is also planning to send the nation's children back to school, starting with the youngest - those in reception classes, year one and year six - and moving on to teenagers who have exams next year.
But the NHS, along with the World Health Organisation and the US Centres for Disease Control, is deeply worried about the emergence of a potentially-lethal complication of coronavirus infection in children - and potentially one common to respiratory coronaviruses - in the form of 'atypical' Kawasaki disease: serious inflammation of the heart and circulatory system. Around 90 children have been affected so far, with three dying.
This complication was first discovered in the UK and London is a global hotspot - yet instead of keeping children at home until the risks are thoroughly investigated and understood, Johnson wants to send them back into close contact at school.
Yet again Johnson showed how little the Tories care for truth - and even less for the lives of ordinary people - and he did so in the most blatant and dishonest of terms, no doubt driven by the Tories' corporate backers and their 'economic necessity'.
It would have been just another day in the Boris Johnson office - if he'd actually been there instead of sending a recording to stand in for him.'

And just consider what may have happened this morning in the light of this information from South Korea:
(Skwawkbox: Sunday 10 May 2020) 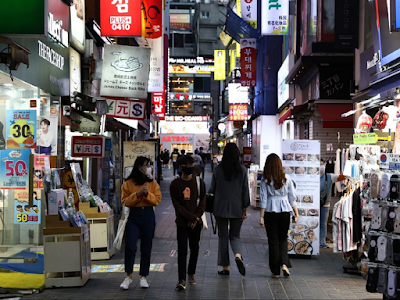 The South Korean government issued an emergency order on Friday for the closure of all bars in Seoul after a single clubber infected at least 40 people and exposed over 1,900 more to the coronavirus. The closure is indefinite.
The authorities were forced to trace the contacts of the 29-year-old man, who has not been named, after his night out in the Itaewon district of Seoul - and have so far found at least forty people confirmed with the infection. The country had previously been free of domestic transmission of the virus after an extensive and rigorous programme of testing, tracing and isolating as recommended by the World Health Organisation (WHO).
The man is believed to have been asymptomatic - like half to three quarters of all coronavirus-infected people at any given time.
The BBC News channel has reported the move and described it as a response to 'a new cluster', but so far does not appear to have included the detail that a single infected source was involved. Warning that the country will be judged on its ability to prevent the spread of the infection beyond the Itaewon cluster, South Korean Prime Minister Chung Sye-kyun gave details of the incident:

It seems that community spread occurred from a silent spreader who visited nightlife spots during the long holiday from April 30 to May 5.

South Korea's proactive test-and-trace programme has enabled the country to limit coronavirus deaths to just 236 as of yesterday, without a lock-down. The UK government ignored the WHO recommendations and has seen over 32,000 deaths according to official figures, but the real toll is thought by many experts to be much higher - with some estimating as many as 70,000 or more.
In spite of the continuing high infection and death rates in the UK, which have made this country the worst-performing major nation in the world in fighting the pandemic, Boris Johnson is expected to announce a relaxation of the lock-down this evening. This has been attributed to pressure from the Conservatives' corporate backers, though Johnson is likely to once again claim a scientific basis for the decision.'