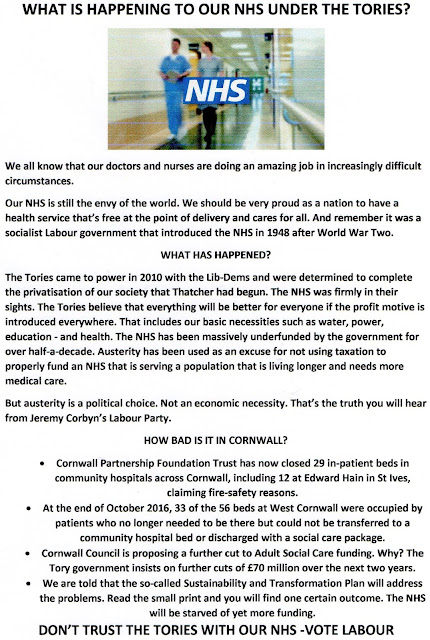 THE ROAD TO CORBYN - A VIEW FROM THE PLATFORM

I want to live in a Britain where all the frustrations, desperation and anger - and hurt and sense of unfairness - that ordinary people are feeling are channelled towards the principled solutions offered by a Labour Party, led by Jeremy Corbyn. A Party that communicates the vision and hope of a new socialism for the 21st century. At the beginning of this week, JC sent out an email to all Labour Party members that carried the title: 'People are right to be angry'.

Let me give you some extracts:

Whether in the US or the UK, people are feeling left behind - marginalised by an economic system that makes them work harder for less, while hovering up ever greater rewards for a small elite.

People are right to be angry. Our political and economic system is delivering rising inequality and falling living standards.

Young people today find it harder to get a home of their own, harder to find good secure jobs, and are landed in lifelong debt simply for wanting an education.

Older people see their children and grandchildren struggling, their libraries and community

Jago Stone's story includes the one he told in his forties through the pages of an autobiography: 'The Burglar's Bedside Companion' (1975). I am now attempting as his biographer to provide another account, this time the story of the whole life from his birth in 1928 through to his death in 1988.

As you will know if you have read my website and my blogs, my research into the life of Jago Stone has been almost from the beginning an online search - a digital detective story. This blog is about one specific episode in this journey into cyber-space.

It was last month, in late October, that I opened the email with the title 'The Rollright Stones'. I knew not what to expect. This time the communication came from a fifteen year old student who had discovered my 'wonderful' website and interest in Jago from a google search and wanted to know the current market value of a Jago Stone painting and whether I knew of any likely buyers. He explained his grandparents had some of Jago's paintings and were happy to gift him one to sell to help raise money to send him on a one month adventure excursion to Peru.

An exchange of emails followed. I talked with granddad for twenty-five minutes over the phone, two days later. Mum and Dad changed their half-term holiday plans to drive their teenage son and younger brother all the way to Cornwall a week later to deliver to our house the five paintings we had been offered and bought. It turned out there was also a sixth painting that we also bought. This blog has images of three of them - a later blog will show the others.


Let me give you the drift of the phone conversation with granddad as from this I established the provenance of the paintings. Grandad, now aged eighty, had been an area manager for Ind Coope brewery with responsibility for the drinking places within central Oxford. His professional duties had

TAKING STATISTICAL STOCK - PART 3 - THROUGH THE EYES OF A TRANSITIONAL OBJECT - ME: PETER TED

I began this statistical stock-taking exercise at the end of June, continued at the end of August - and now just over two months later present for your interest, amusement and curiosity the third part in this saga. May I introduce my guest blogger for this article:

Well you all know how pleased I was before I took the family off for our Greek vacation. My brilliant idea of doing three consecutive blogs, one a day for three days running, had paid rich dividends as I knew it would. My protégé, the one and only Jeremy Corbyn, had come to Cornwall - I knew he would accept my invitation - and wowed the crowds at Heartlands and so I got Rob, my human, to do those three blogs. 42 and 43 and 35 page views by the end of August. It had to be my idea it was proving so successful.

And the continuing success of other blogs also had my paw-print all over. 'Jago Stone Part 2' led the way with 216 views and I of course had played a critical part in advising my human how best to deal with the issues of gender and sex that surface in that blog. Just ignore anything that Sally Ann, my partner, might say. (See the brilliant picture of me that she has somehow got herself linked into for a picture of the grey bear in my life). She has a weird view that just because I've been around for  centuries I'm kind of 'un-reconstructed' as she puts it.

I can't think what that silly grey bear means. And of course the second most popular blog was very much my idea too.  I said to Rob as we watched 'Avenue Q' at Kidz R Us 'There's a blog in this - we

My web designer, Steve McIntosh, alerted me to the review of my book, 'The Road to Corbyn', in the Morning Star Arts by Paul Simon a day or two before Louise and I set off to north Wales for a birthday break. Google had picked up the article in the newspaper that proudly proclaims its role as the People's Press, the workers' national daily newspaper - financed solely by its readers. I warmly recommend buying a copy from your newsagent whenever you see it displayed or even consider placing a regular order if you can afford to do so. It is an excellent way to keep in touch with a consistent socialist perspective. The Guardian or the Independent will not serve this purpose, whatever their other merits.

My point of difference with Paul Simon, the reviewer, comes down to what we understand by 'socialism'. I believe that in an advanced industrialised society with free elections such as ours the coming to power of a democratic socialist party through a general election does not and should not mean the overthrow of capitalism. The language and realities of the late 19th century are no longer apposite in the early 21st century. As Jeremy Corbyn the leader of the Labour Party here in the United Kingdom says, we need a socialism fit for the 21st century. I sense in Paul Simon's critique of my book the presence of a traditional Marxist perspective that looks back to the great iconic figures of Marx, Engels and Lenin with a reverence that those with faith do tend to reserve for their founders

and their sacred writings. My contrary view is shaped by the philosopher's awareness of the provisional nature of 'truth' and the historian's instinct for change over time. I am with Jeremy Corbyn and Bernie Sanders (imagine Trump vs Sanders - Trump would not have stood a chance).

Read on and make your own judgements about the relevance and meaning of socialism. Here is an abridged version of Paul Simon's review:

'This re-imagining of John Bunyan's The Pilgrim's Progress for our own more secular times certainly opens impressively: "One night, on my journey through the wilderness of this world, I laid me down