Following the pattern that has now become normal, I am sharing the contents of my monthly Jago Stone newsletter - published through Mailchimp - with the wider audience who follow my blogposts on both sides of the Atlantic. Here is the text of the September newsletter, published around a week ago. Apologies to those of you who have already seen and read the following - but there is a very important update concerning publication.


SEPTEMBER 2019 - UPDATES ON 'THE REMARKABLE LIFE OF JAGO STONE' - THE BIOGRAPHY
Around a fortnight ago, on Tuesday 3 September, I received this email from my publishers, Unicorn PG:

Dear Rob,
Thank you for your patience. Please find a draft - once you have had a look through please let me know of any changes you wish to make and then I can send it to the indexer.
I suggest we might move the launch to December to allow for our delays. I am so sorry.
Apologies,
I replied immediately, agreeing that a December publication date would be the best time for the launch. Looking on the bright side, Christmas awaits at the end of December and people will be looking for good presents. What better than a copy of 'The Remarkable Life of Jago Stone'!


Having spent the best part of these last two weeks in a painstaking proof-read of my 236 pages, I can assure you that it is still a remarkably good read. And you will have a 'clean' copy, with all the computer glitches removed - I've been identifying all those very many places where my words in standard text have been transformed into the italic text used for passages from other sources - and vice versa. A nightmare! And there was all the page referencing to complete now that the images have been placed in

WHO PLUCKS THE FRUIT IN TORY BRITAIN?

Back in late July this year I published a blogpost: 'WHAT HAPPENS BEHIND YOUR BACK IN A NEOLIBERAL SOCIETY - LOST LANDS OF BRITAIN'. I acknowledged my debt to an article published in the London Review of Books (LRB) on May 23: 'The Appropriation of Public Land in Neoliberal Britain' in which Brett Christophers estimates that the state has sold off 2 million hectares of public land - a tenth of our land mass - since 1979, the value of which at today's prices stands at £400 billion. The social housing component of that total is worth £40 billion - the single most valuable slice of that total sum but still only one-tenth of that extraordinary figure. Here's the link - press here - to take you back to that important and disturbing post.

Around the same time as I was publishing that blogpost, I read a special report in the i newspaper that was headlined: Aristocrat UK: landed gentry's fortunes double (Saturday 20 July 2019). Cahal Milmo's story revealed that Britain's 600 aristocratic families have become as wealthy as they were at the height of the British Empire over the last thirty years and specifically that their fortunes have doubled over the last ten years. In other words, since 2010 and the Tory premierships of Cameron and May - with their imposition of austerity that has seen millions impoverished - the landed elite have been raking in the money. This was material that needed sharing more widely. The links with the economic policy of neoliberalism in Britain require teasing out. Financial deregulation and economic liberalisation have been of huge benefit to these very rich men and women.


A hereditary title is now worth an average of more than £16 m - nearly twice the value it stood at prior to the global financial crisis of 2008. Since 1979 and the start of the Thatcher years, the value of

Brace yourself. This post will make for uncomfortable reading. Regular readers will know that my understanding of the world has been shaped by articles that are published in the London Review of Books (LRB) and that I value the opportunity to widen the circulation of these important ideas through the medium of my blog-posts. At the beginning of August, the LRB edition included a review by Francis Gooding of a book by David Wallace-Wells (2019), The Uninhabitable Earth: A Story of the Future. Here's the bad news:

Marshalling research from all quarters, Wallace-Wells 'paints a picture of disastrous change on an almost incomprehensible scale'. His focus is on the most direct effects of global warming - hotter temperatures, rising seas, extreme weather, and so on. He reminds us that of the five previous mass extinctions that we now know have occurred on our planet only the most recent was caused by an asteroid. The other four were all due to 'climate change produced by green-house gas'.


We are currently adding carbon to the atmosphere at a rate 'considerably faster' than it took to cause the almost total destruction of complex life in the deadliest of these mass extinctions, 250 million years ago. The Intergovernmental Panel on Climate Change (IPCC) predicts that if emissions continue at their present rate, the earth could be warmer by 4.5 degrees C by 2100. Permafrost in the Arctic is already melting, with the potential to release large amounts of methane. Hydrogen sulphide is currently bubbling out of the sea and forming vast organic dead zones of green sulphur bacteria in four hundred identified zones, totalling an area the size of Europe. The oceans are beginning to die.

'Dying Oceans' is one of 12 chapters in which Wallace-Wells analyses what he calls the 'elements of chaos'. Each is dedicated to a particular feature of a warming world, such as:

The US military is planning for a new era of conflict governed by global warming; so too is China. We are looking at the fantasies of science fiction coming true: end-time resource wars on a dying planet.


Everything that happens within our interconnected ecological system has consequences elsewhere. One major wildfire in California can wipe out the emission savings of the entire state for a year. The loss of forests to fire adds to the disaster of worldwide deforestation, a major cause of increasing carbon emissions.

The 2016 Paris Agreement on climate change and the need to reduce carbon emissions accepted that  a reduction by 2 degrees C was a 'must-meet target'. This now seems improbable. Overall emissions continue to rise. Wallace-Wells writes: 'We have now already exited the state of environmental conditions that allowed the human animal to evolve in the first place in an unsure and unplanned bet on just what that animal can endure. The climate systems that raised us, and raised everything we now know as human civilisation, is now, like a parent, dead.' 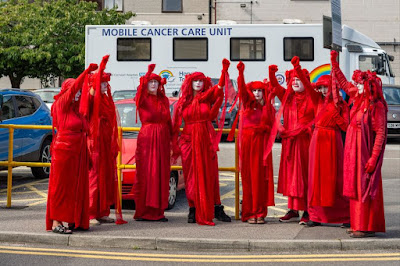 Faced with a planetary-scale crisis that requires urgent action now, the powerful and wealthy elites who govern us are left exposed - and that is why Friday's Global Climate strike is so important. Our children are saying the Emperor has no clothes - he is naked. Stop pretending - and act now.

What we need - urgently - are vast, co-ordinated programmes of de-carbonisation.

What we have is the former head of British counter-terrorism claiming that Extinction Rebellion represents 'anarchism with a smile'. State security services and corporate interests line up to declare environmental groups a threat. In fact, such groups are in Francis Gooding's words: the 'vanguard of planetary salvation'.


If we are to save ourselves, the IPCC says that global mobilisation on the scale of the second World War will be necessary. This Friday is lighting up the way to such action. JOIN US, PLEASE!   I'm at Lemon Quay in Truro from 10.30 am - google to find the location of your nearest strike for sanity.

Finally, do click this link BY PRESSING HERE to revisit or read for the first time my May blog-post: CLIMATE CHANGE SOS - AND THE ROLE OF A JEREMY CORBYN-LED LABOUR GOVERNMENT