A SOCIALIST VIEW ON WHAT'S HAPPENING TO FOOTBALL - AND A GLANCE AT MY MANCHESTER UNITED SCRAPBOOK.

Jeremy Corbyn provides the commentary on a DoubleDown video, available on Twitter, that has been issued to celebrate the collapse of the plan for a European Super League. "Created by the Poor, Stolen by the Rich" is a title that nicely encapsulates what has happened to association football. The proposed European Super League with its no promotion/no relegation structure would have killed off the English league system in the interests of the big money men.

LYING IN THE HOUSE OF COMMONS IS NOW ACCEPTABLE - WHAT CAN WE DO?

Ian Lucas was the Labour MP for Wrexham from 2001-2019, standing down as the candidate before the 2019 election. On the 14 March 2018, he cross-examined Matt Hancock during the proceedings of a parliamentary sub-committee which was investigating why Part Two of the Leveson inquiry had not been held.

Here are his thoughts at this present time in the spring of 2021:

Looking back now, three years on, this exchange was a big part of my decision to stand down from Parliament the following year. I was always told that telling the truth was a fundamental part of Parliamentary process for a Member. I remembered, even as a child, reading about John Profumo and how his career had ended because he had told a lie to the House of Commons Chamber. It was my view that Hancock had misled me in the Commons Chamber and I thought I had exposed it in my cross-examination of him. What astonished me was his lack of contrition. What also astonished me was how little interest the press took in the exchange. I do not remember ever being asked by a journalist about the cross-examination. It seemed to me that telling the truth in Parliament no longer mattered.

And here is part of the transcript of that cross-examination:

Ian Lucas: Secretary of State, I was in the Chamber for that statement and I was very concerned about what Sir Brian Leveson’s position was on this matter. When I listened to you my

Peter Stefanovic is an Australian lawyer, journalist, and film-maker who has created this journalistic masterpiece that has now had 10.7 million views - and yet received no mention on mainstream media. BBC News, ITV News, Channel 4 News, and Sky News have not said a single word about it. Peter's message is: 'Please help me send it to 12 million this weekend and shame them into reporting it.'

In May 2020, I published a series of blogposts that tried to get inside BJ's mind - to understand the flaws of

When impunity reigns, the fabric of British democracy decays. The man who holds the office of prime minister in this country, Boris Johnson, is a serial liar with no moral compass. He is a narcissist who has serious shortcomings in empathy. He bears significant responsibility for the deaths from COVID-19 of around 150,000 British citizens.

Watch and listen as he is nailed by Hardeep Matharu for Byline Times. The Jennifer Arcuri affair matters a great deal. Johnson got away with political wrongdoing then. He is becoming more and more brazen. What next? That is the question posed by Hardeep Matharu - and it is one we all need to be asking. Know your enemy. Be prepared. Resist.

Lest you forget, this is the story of Johnson lauding vaccine 'greed', taken from the Morning Star on Thursday, 25 March 2021. Addressing the Tory MPs on the 1922 Committee, the prime minister joked that 'greed and capitalism' had contributed to the success of the vaccination programme in the UK. The

The journalist Peter Oborne observed in a recent interview with Stop the War Coalition's Sweta Choudhury that "the main political parties seem to be detached from the moral problems of our age". The Morning Star daily newspaper composed an editorial around this judgement (Tuesday 6 April 2021). Rather brilliantly, Ben Chacko and his team dissect the pretensions of the Labour leader, Keir Starmer:

"(Starmer) has defined himself against the most important movement for far-reaching change to have emerged in Britain in decades. While Starmer was (attempting another revamp), his predecessor Jeremy Corbyn was on the streets, standing with demonstrators opposed to the government's plans to criminalise peaceful protest.

"(Starmer) is heavy on platitudes and short on specifics.... Across the Atlantic, at least Joe Biden combines his warm words for unions with condemnation of Amazon and other major employers. In fact Labour has proposed nothing approaching the significant investment in infrastructure and job creation that the US president has announced. 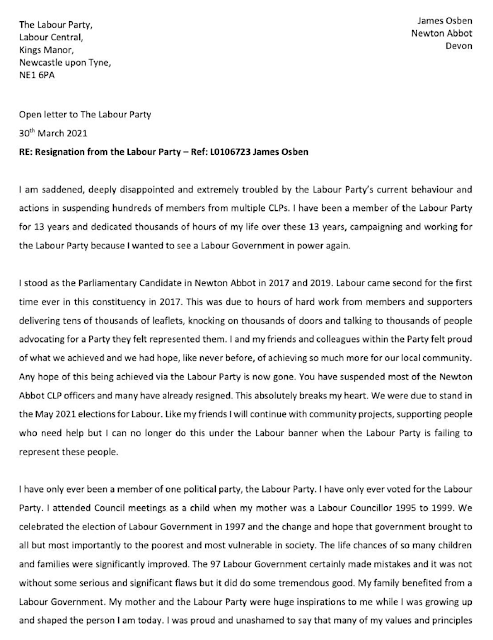 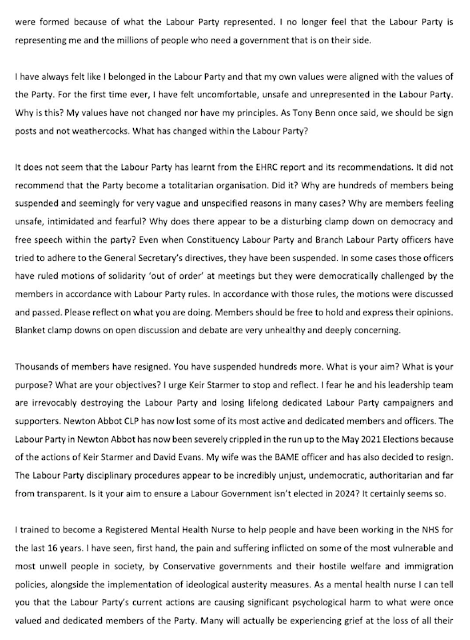 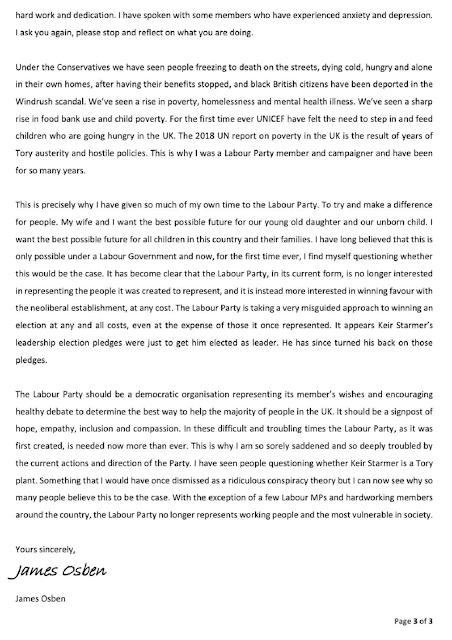 Those of us in the Labour movement which by definition represents those whose interests are damaged by unregulated capitalism are facing an existential crisis. My own journey is towards supporting the
Read more »
Posted by ROB DONOVAN at 10:02 No comments: