My main source for what follows is a piece by Ian Jack entitled 'Why did we not know?' in which he reviews a new work by Brett Christophers: 'The New Enclosures: The Appropriation of Public Land in Neoliberal Britain'. The article was published in the London Review of Books on 23 May 2019. Not for the first time, I have finished reading a piece in the LRB determined to share its important insights at a later date in a blogpost.

People matter which is why I am a socialist. The question of land matters because people matter.

Ian Jack begins his review with a personal story from his family's past about some local land that had been bought from the War Office for property development in Scotland. He comments:
'Nobody thought to wonder why we didn't know who had bought the land …. or who had made money from developing it as a housing estate; or why, as it was public land, owned by the state and therefore indirectly by us, we had never been consulted.'


Such a lack of legitimate questioning has been typical of popular attitudes to the sale of public land. That is the core argument that underpins the work of Brett Christophers. He calculates that the transfer of land from state to private ownership is the biggest of the privatisations that began under

Margaret Thatcher and has continued under every administration since. This transfer of land from the public to the private sector dwarfs in both scope and value the more prominent sales of utilities such as gas, electricity and water, or social housing under the Right to Buy scheme, or nationalised industries such as British Rail.

Christophers estimates that since 1979 the state has sold about two million hectares - about a tenth of Britain's landmass - which at today's prices would be worth £400 billion. The sale of social housing was the single most valuable component of that astonishing figure at £40 billion - but only amounted to a tenth of the total of this asset sale of our land. His estimate includes land such as forests, artillery ranges and municipally owned farms and also land that was an inherent element in other privatisations such as electricity generation and social housing.

When Thatcher entered Downing Street in 1979, more land was owned by the state than ever before - a fifth of Britain's land mass. Half of that state-owned land has been sold off in these last forty years. The disposals include:

In Christophers' words there has been: "a colossal devaluation of the public estate".

This was no accident. It has been a project determined and driven by the Treasury and the Cabinet Office. And we have all been blind-sided.

The point about land is that it is the ideal vehicle for the storage and distribution of value. It is the favoured form of collateral for bankers. The economic historian, Karl Polanyi, captures the significance of land beautifully in these words:

''We might as well imagine the human race being born without hands and feet as carrying on [its] life without land."

The neoliberal agenda has been the defining element in UK society since Thatcher. The state has been determined to shrink itself, particularly but not exclusively under Conservative governments. Public land became defined only too readily as surplus in these conditions. These were times for political lies to be spun. Conservative governments and their allies in the property business fostered the idea that administrative sloth and excessive planning regulations were preventing the private sector from taking on public land to build badly needed new homes. In fact, the private rather than the public sector has been doing the hoarding of land. Again, in Christophers' words: "The private sector does not lack land; and nor, more significantly, does it lack land that is suitable for commercial development, or for which planning permission has been granted". Yet in 2016, the difference between the number of houses being approved and those actually being built was almost 500,000.

Predictably, 30% of today's Tory MPs are landlords - though this is small beer by historical standards. What really counts as a political influence is the big spending of the land lobby. In Christophers' estimate, the biggest corporate buyers of privatised land have been the financial institutions and property developers (including investors and house-builders). These are the sectors that have always been major donors to the Conservative Party.

Land registers are supposed to identify the ownership of all public and private land, but as recently as 2005 less than half the total acreage of England and Wales had been officially registered. By 2015, the area ostensibly covered had risen to 85%, but true ownership often remained hidden. Between 2000 and 2012, 95,000 companies were established in tax havens such as the British Virgin Islands to shield their owner's names from public knowledge and minimise their tax bills. According to the Panama Papers leak in 2016, British  land and property worth more than £170 billion was owned in this way.

It is the undeniable truth that land is now being hoarded by private owners who seek to keep the supply of houses below the level of demand, and in this way sustain high house prices and their own profits. Meanwhile, Britain has become a rentier economy, in large part thanks to the disposal of social housing, which means that rent is now paid to private landlords rather than to local authorities. Rent is the primary source of economic growth in the UK - and as a proportion of household expenditure has doubled its burden between 1985 and 2014. 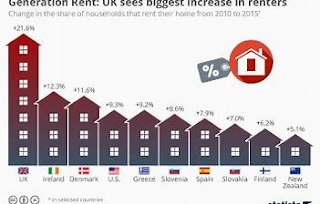 The social division between the rent-takers and the rent-payers has never been so marked - and so unhealthy. We are being distanced from the land we inhabit. And we never even knew what they were doing. Remember - always - watch your back.