same, according to the Office for National Statistics (ONS). At present it is at around 9.3% of GDP. On current projections, it could fall even lower due to cuts - 6% of GDP by 2021.

On international comparisons, NHS performance is good. The US-based Commonwealth Fund's study of  20,000 patients in 11 industrialised  countries found the NHS to be almost the least costly and to have almost the best levels of access. The most recent update from the Commonwealth Fund in 2014 ranked  the UK first overall. Did you see that headline in the media?

What is happening, though, are stealth finance cuts and massive PFI debts leading to frontline staff reductions and diversion of funds from patient care. Bed numbers have been reduced by over 50% since the late 1980s.  Social care funding has been slashed at the same time as demand from an ageing population increases. Patients who are fit enough to leave hospital cannot do so because the social care package is not available.

It's worth remembering that public satisfaction with the NHS was at its highest ever in 2010-11 when the Tory-led government began its assault.

Step Seven: Legislate for the Dismantling of the NHS

David Cameron, as the new leader of the Tories and fresh from his job in the world of PR, knew a thing or two about deception. His party was rebranded as compassionate - the message was clear: 'The NHS is safe in our hands'. The 2010  manifesto promised 'no top-down reconfigurations of the NHS'. Within weeks of their election success in 2010, the Health and Social Care Bill was being prepared - with the help of the private health lobby behind the scenes - a massive top-down reconfiguration.

Only three words matter in the 2012 Health and Social Act (2012) that followed. ANY QUALIFIED  PROVIDER. Competitive tendering of NHS contracts was opened up to providers from the voluntary and more importantly private  sectors.

The Act of 2012 allows for reductions in government funding of health services as a consequence of decisions made independently of the secretary of state ... it provides the basis for a shift from a mainly tax financed health service to  one in which patients may have in the future to pay for services  currently free at point of  delivery. 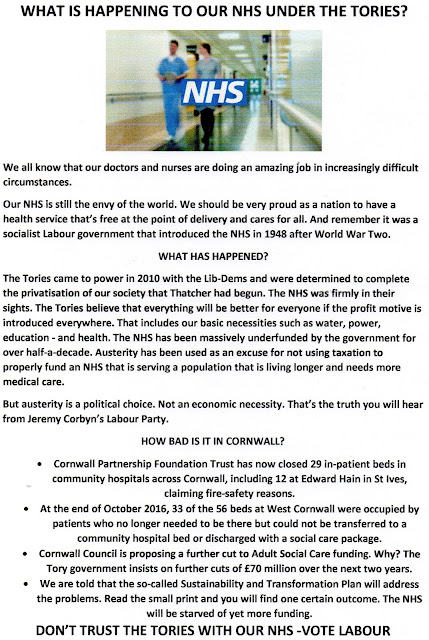 Step Eight: Plot against the NHS

Nearly everything that has been described so far was anticipated in Tory think-tank documents in the 1980s. This is a theft long in the hatching. Oliver Letwin and John Redwood were key figures in this neoliberal dream world that has now become our nasty reality. Andrew Lansley, the secretary of state who presided over the passage of the 2012 Act, had been private secretary to  Norman Tebbiit when Tebbit was privatising BT. How could David Cameron say he cared deeply about the NHS because it looked after his disabled son?

Never  let a crisis go  to waste .... Efficiency savings are demanded. The Daily Mail launched its own Save Our Hospitals campaign. The government cuts nurse training places and so hospitals are forced to hire more expensive agency nurses. District and community nurse numbers are plunging down, from 12,500 in 2003 to 7,500 in 2014. Compulsory competitive tendering of all contracts to Any Qualified Provider leads to cherry-picking. This means that  high-volume, low risk healthcare - cataract surgery for example - is picked off by private firms. Leaving a smaller pot  of money to provide comprehensive healthcare, which in turn leads to increased rationing. Rationing of care is already accelerating. A CCG in Devon three years ago announced that obese patients will be denied all routine surgery. We are moving swiftly to a two-tier system where the haves will be forced to take out private insurance and the have-nots will be looked after by a third-class health service.

Personal health budgets are being trialled nationwide - but they are the Trojan Horse for privatisation. They undermine the fundamental  NHS principle of equity of care. GP contracts are likely to be converted in such a way as to comply with competition rules - all contracts would be tendered and open to privatisation. We are well down the path to the end of the NHS..

When Aneurin Bevan was asked by an opponent "How long do you think your NHS will last?", he replied: "As long as there  are folk left with the faith to fight for it".

This blog has been one small pebble skimmed across the pond in the hope of creating as many ripples as possible.