STAGE TWO OF THIS COVID DISASTER JUST GOT WORSE

Just when you thought it couldn't get any worse, it has.


The UK government continues to understate the deaths Boris Johnson's mismanagement of the UK's response to the coronavirus pandemic has either caused or allowed - many of them entirely avoidable. The official daily total, exposed weeks ago by the SKWAWKBOX as a sham, barely states half of the deaths even according to the 'cautious' analysis of the Financial Times.

BREAKING: Estimate of real UK #coronavirus related death toll raised to 61,200 - nearly double the official toll.
When will the Govt level with the British people about the genuine scale of this crisis?

The Tories' daily charts - now abandoned after the UK reached second-worst in the world even on the government's figures - showed this country in a cluster of European nations, including France, Spain and Italy, with the US way above.
But even based on that cautious FT analysis, an honest chart - shown in a linear form so the distances
between points are proportional and showing the FT's honest-cautious UK death toll of around 61,000 - will look something like this:

However, even that figure of over 61,000 is almost certainly far short of reality.
Leaks from UK hospitals have demonstrated that in-hospital deaths - for a long time the only figure the government released - were being under-reported. Hospital whistleblowers revealed that the under-reporting was by half.
And every nation that properly measures its deaths in care homes has found that around half of all COVID-19 deaths take place in care homes - and those nations do not follow the Department of Health's deliberate policy of sending infected elderly patients back to die in care homes, where they infected fellow residents. If care home deaths in the UK are any different to those of European care homes, the UK figure will be higher.
With a real in-hospital figure double that of the official number and that doubled again by care home deaths, the real UK total is likely to be well over 70,000 and perhaps even rivalling the US's shame - something like this:

None of this will particularly disturb Boris Johnson or the eugenicists among his advisers. The 'herd immunity' plan, from the beginning, accommodated the deaths of half a million UK people or more - and it never went away; only the language and charts were changed.
And, as SKWAWKBOX exclusively revealed yesterday, the government has been quietly tripling its emergency mortuary capacity - at the same time as relaxing the lockdown and driving working people back onto public transport and into workplaces.

Around 70,000 deaths from Covid-19 so far - and Stage Two is taking us towards a second spike and another lockdown.

Now a reminder of how we got here:

Award-winning doctor Kailash Chand welcomes BBC's Panorama programme - but points out the government's failures and negligence go far further than mass shortages of protective equipment and says it's time to hold it to account
(Skwawkbox: Wednesday 29 April 2020)
Dr Kailash Chand OBE has spoken out to welcome the BBC's Panorama exposé of the Tories' massive and negligent failure to prepare for the coronavirus pandemic and to provide adequate 'PPE' - personal protective equipment - to front-line NHS staff.
But he also points out that the PPE disaster - which has already cost more than 150 health workers and uncounted patients their lives - is just the tip of the huge iceberg of the government's guilt. Among a litany of Tory decisions, Chand lists:
All these have weakened the NHS and made us all far more vulnerable to the pandemic than we needed to be.
Chand talks of his pride in the NHS and his sense of shame and furious anger at the scandal of UK death rates compared to the rest of the world: 325 people per million - up from 233 per million just a week or so ago - versus around 25 per million in most other countries.
13 times higher.
Kailash Chand says he is not sad over these appalling facts - he is deeply angry. And he calls for people to rise up and demand accountability.'

And here's the way forward urged by Dr Chand:

But our (mis)government has decided to try to open schools - wealth before health has always been the mantra of the neoliberal Tory. But there is resistance:

Liverpool's Labour mayor has stated emphatically that he will not re-open schools while the coronavirus is still a threat to local children, telling the BBC:

We're still one of the highest areas for COVID-19... and we're concerned about allowing children back into school who could then either get the virus themselves or spread the virus.

When asked whether this meant he would refuse to re-open schools on 1 June 'whatever the government's telling me to do', Anderson responded:

Yeah, absolutely. The safety of our children comes first.

Anderson is a 'marmite' character in the city, but it has been hard to fault his stance on the pandemic, in stark contrast to the party's national leadership.

One last set of images - a taste of what's coming in the UK?
Hope springs eternal ....

Belgian health workers have turned their backs en masse on the country's Prime Minister in protest at their government's mishandling of the coronavirus crisis: 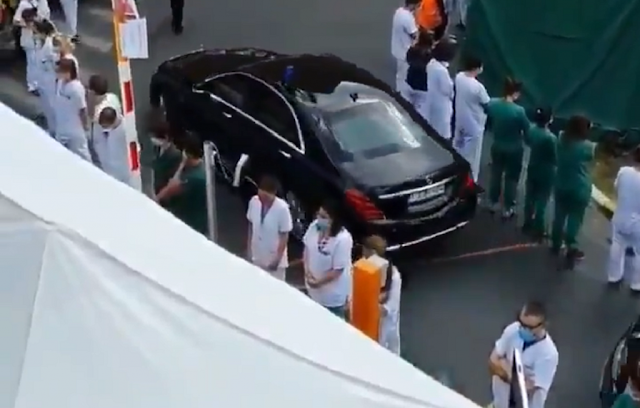