SKWAWKBOX, as ever, is on the case. Here are extracts from their post from Monday 1 June 2020:
'Transitioning' from four to three is the government's excuse for relaxing lock-down while still at level four - but in reality, the new measures
represent a jump from four to two and four to one as of this morning, according to lock-down alert classifications 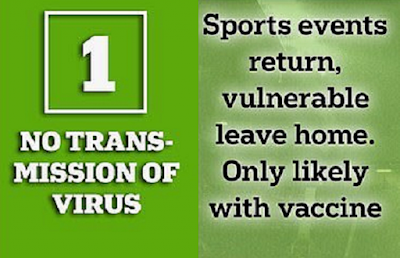 Both former stand-in PM Dominic Raab and last night's press drone Robert Jenrick claimed - confirmed also by Number 10's official press spokesperson - that the UK is at Level 4 of the government's coronavirus alert system and 'transitioning to Level 3'.
To be clear, the alert system has no provision for 'transitioning'. The UK is still at Level 4 - which says levels of the virus in the population are 'high': 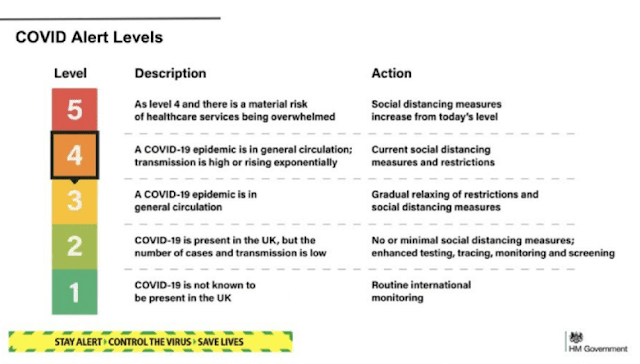 Boris Johnson claimed, when the alert system was launched, that the alert levels would drive the government's changes - and if something was planned but the alert level was too high, the government would postpone the change.
But even if 'transitioning' was a real thing, even Level 3 does not allow the kind of changes that Johnson is making:
A return to work or school is meant to happen at Level Two: 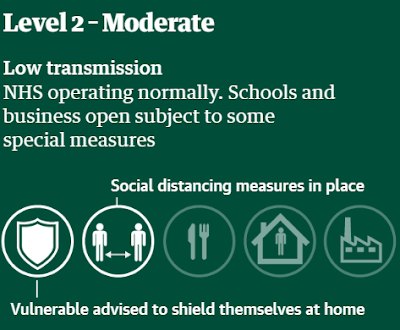 Yet Johnson has told schools to accept some age groups from today - even though his scientists know it will drive up the infection rate - and sent millions of people back to work, with no notice, three weeks ago.
But Johnson has gone further still, telling people who are 'shielding' in complete lock-down because of health vulnerabilities to go out. But that is only supposed to happen at Level One, which means no virus at large in the UK.
Boris Johnson has made an absolute nonsense of his claims to be always 'led by the science' -and of his own meaningless blather about what his measures mean when he launches them.
His wanton haste is exposed by his own system. And he knows it is deadly - as his own government's decision to more than triple temporary mortuary capacity to 100,000 in readiness for a massive new 'spike' puts beyond question.
This is not mere incompetence. As with the Tories' determination to send infected elderly people back to care homes, it is knowingly sending millions into danger and condemning hundreds of thousands to a needless death.
In short, it is murder.

The Government of the UK - Boris Johnson and his yes men and women ministers - are still insisting that they are following the science. But more and more of the scientists are saying "NO! - You are not." More on that in another blogpost later. For now, consider these latest 'R' rate figures, published yesterday on 5 June:

The official line over the last week or so has been that the reproductive rate of coronavirus has fallen to below between 0.7 and 0.9 on average in the UK - suggesting the average patient is infecting slightly less than one other person. That's why lockdown can be eased and the wheels of the economy set in motion again. But according to research by Public Health England and Cambridge University the new estimates for the regions of England as a median average are as shown:

If you are living in the North West, be very worried. If you are living anywhere else, be worried.
These figures are screaming: "Don't relax the lockdown too soon!"
Do you think this government will listen?