Sky's Beth Rigby as good as pleaded with Johnson to at least show some sign of sorrow for his
victims and their bereaved families, but Johnson simply dodged the question - twice - by babbling about data and claiming it was too early to assess whether decisions had been good or bad:

The Tories are notorious for their heartlessness, but Johnson is the Prime Psychopath.

Former DWP Secretary Iain Duncan Smith thinks we should all be back at work - and none of this '2m apart' nonsense.


So to support his claim, he told BBC News viewers that coronavirus infections had already 'peaked' when the lockdown began in March. Let's see whether that stands up:

In fact, on lockdown day the UK saw 967 new cases. From there it went up, every day, until 10 April when it peaked at 8,681 - almost nine times the lockdown-day figure.


Had Boris Johnson not delayed the lockdown as long as he did, of course, as many as three quarters of the UK's deaths could have been avoided. But Duncan Smith wants to rush us all back to tight conditions even faster than his psychopathically unapologetic party boss.


967 vs 8,681. Some 'peak'. Still, at least the Tories have increased temporary mortuary capacity in readiness for the second wave.

Former deputy BMA Chair Dr Kailash Chand OBE appeared on BBC Breakfast this morning to discuss the government's report on the higher risk of the coronavirus to black, Asian and ethnic minority (BAME) people and delivered a withering verdict on the Tories' delays and evasion.
Describing the report as 'amputated' and Boris Johnson's prime ministerial residence as 'Drowning Street' because of its shambolic series of controversies, Dr Chand called for concrete and immediate action to protect everyone, including BAME communities - whose trust Johnson has lost - and warned that the government is unprepared for the second wave its actions and inaction are likely to cause:
Chand says that the government needs to 'get its act together'. There has been no sign so far that it is capable of doing so in any sense that would mean anything to those its conduct is harming, as Johnson continues to pursue his reckless 'herd immunity' policy

Boris Johnson has decided to abolish DFID, the UK government's department responsible for international aid - a decision that cabinet members insist he did not discuss with them.
But a comment by Johnson about the abolition makes it clear that he is taking his decision because he wants to tie support for desperately poor countries to their political subservience and compliance with his interests - a comment that horrified Oxford University lecturer and former diplomat Dr Jennifer Cassidy: 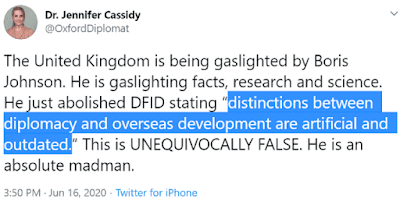 Johnson's linking of 'diplomacy' and overseas aid - a completely false connection - is political speak for an intention to make poor countries follow UK wishes (diplomacy) before they receive aid (development), a form of extortion long practised by the US, the country Johnson so obviously wishes to emulate.
In other words, coercion of vulnerable poor nations by rich elites: do what we want, or receive no help.
Dr Cassidy is entirely correct. Johnson - like the figures advising him - is an absolute madman.

THANK YOU SKWAWKBOX - YOU BRING US HOPE.