WHY CAN'T OUR GOVERNMENT GET ITS ACT TOGETHER?

The question needs to be asked. Why can't the government of the UK get its act together? Is it incompetence? Or is the inaction deliberate? Or is the answer to the question to be found somewhere on the spectrum between these two possible positions?

Right from the start of this pandemic crisis, the UK government has been smart enough to take shelter behind the 'fact' that all their actions (or inactions) have been shaped by advice from medical and scientific experts. We can't be wrong, government ministers have been implying, because we are acting on what the truths of science and medicine tell us. For the purposes of television and other media images, they have even had the scientific and medical big-wigs standing behind their lecterns beside the prime minister as he leans towards his people behind his and proclaims the goodness of all things Tory under Boris.

One of those big-wigs is Professor Chris Whitty, England's Chief Medical Officer for Health since October 2019. Chris Whitty is Professor of Physic (the term for medicine when the post was first created in 1597) at Gresham College. I came across the name of Chris Whitty in a rather round-about way when my friend, Stephen Vranch, recently recommended the online Gresham Lectures and I began investigating what was on offer.

That's how I discovered - courtesy of a Chris Whitty lecture - Potts disease of the scrotum: an historically important and now, thank goodness, unknown disease. Who suffered from this? Boy chimney sweeps.  Boys as young as 4 were forced up chimneys to clean them; squamous cell carcinoma of the scrotum made its appearance when they reached puberty and had grown too big to continue their work. The Chimney Sweep Act of 1788 made parental consent a requirement and
forbade employment of those under the age of 8 - but even these restrictions were not enforced. The first effective Act did not come until 1875.

Chris Whitty tells the chilling story to effect in his lecture on 15 January 2020 - and then concludes with words that have become in themselves deadly chilling in the context of the Covid-19 pandemic that has led to so many deaths. (The Professor later showed symptoms himself and was fortunate to recover from what seems to have been a mild infection.) Here are his closing comments:

'I will comment - without drawing too many parallels - that throughout the history of the debates about what to do about child chimney sweeps, there was a very strong concern not to interfere with trade. That was the main reason why people consistently pushed back on curbing the employment and the age of chimney sweeps. And unfortunately I sometimes see parallels - fortunately not so severe - in some debates in some countries today.'

I assume, Professor Whitty, that you knew little or nothing then about what was around the corner in your own country. You could not have known, could you, how the government for which you are an official advisor would react when first confronted with the news from China of the emergence of a new and deadly virus. It is clear, however, that the Johnson-led government of the UK initially reacted by putting the interests of trade above all else. That is not how the government of New Zealand reacted as my blogposts have shown.

The question now is: How far is the UK government still acting in a way that allows the virus to spread through our population so herd immunity can be achieved before the vaccinations are available in a year and a half or so?

Skwarkbox is inclined to see the UK government as leaning towards the deliberate act rather than being simply incompetent. I am moving in that direction. What do you think after reading what follows?

Civil service union PCS has warned that the government's attempt to force around 2,000 passport office staff back to work - in spite of the government's coronavirus lock-down instructing workers to stay home - is putting lives at risk.


Workers have asked how they are supposed to get into the 500 or so offices the Home Office wants them to staff without using public transport or needlessly exposing themselves and others - and their families - to infection, after a leaked Zoom meeting transcript revealed the government's plan.


A ban on international travel means that processing passport applications does not constitute 'essential work'. Staff reacted with horror to the danger to themselves and their families.


But the leaked meeting also revealed that - as the SKWAWKBOX warned readers three weeks ago - the government's 'herd immunity' plan is very much still in place, with nothing changing but the language and charts used to describe it.


We are working on the assessment that 80% of us, if we haven't already, will get the virus.
We cannot hide away from it forever.

'Herd immunity' is the idea that if enough of the population - normally 95% but the government is claiming 60-80% - have antibodies against the virus, it will be unable to continue spreading. However, it is normally achieved by vaccination.


Without a vaccine, given the death rate of the virus, reaching the required levels of community immunity would mean hundreds of thousands - as many as two million - people in the UK would die.
Three weeks ago, after the consequences of the plan were exposed - again, weeks after the SKWAWKBOX revealed them - the government claimed that it was no longer following its intended course of action.
But this was a lie - and the Home Office gave away the game in the comments of the Deputy CSO.
Only three days ago - on Tuesday of this week.
The BBC reported the leak and its contents - but still regurgitated the government's claim to have abandoned its herd immunity plan.
But the reality is clear: that plan is still very much alive - and right at the centre of the Tories' thinking. A plan that will result in an unthinkable number of innocent deaths if they are allowed to pursue it.

BBC presenter Emily Maitlis has often been accused of a dismissive, 'eye-roll' response to left-wing policies and viewpoints. But a short segment on last night's Newsnight programme has people wondering whether she has had a 'road to Damascus' moment.
Maitlis flagged what was to come by deriding the Tories' language of 'fortitude and strength of character' as a factor in surviving COVID-19 - has she lost someone to the virus?
She then went on to attack the idea that the pandemic affects rich and poor alike, listing low-paid front-line workers and the far greater risk they face - and pointed out that 'lock-down' is far harder for poor people.
And she even went as far as to call inequality 'stark' and to raise the need for a new 'social settlement' to prevent it becoming even worse:
If Emily Maitlis is calling for change in such terms, then the situation must be dire indeed.
And if her awakening - if that's what it is - spreads around the BBC, the Tories might just be held to account for their abysmal handling of the crisis and their weakening of our society's structures that has made us so vulnerable.

Although it would surely astonish many UK citizens enduring lock-down because of the wildfire spread of the deadly coronavirus, flights continue to stream into the UK - including many from global virus hotspots such as Madrid and New York.
It would surely shock those people even more to realise that there are still no health checks on passengers arriving from them - not even a temperature check - except on some passengers leaving the country.
The Heathrow Airport coronavirus 'FAQ' page confirms that this is the case - and that nothing is being done except to recommend passengers wash their hands and keep 2m apart.
As the page explains, Public Health England is telling airports not to conduct temperature checks - and passengers are simply allowed straight onto the capital's public transport system once they clear passport checks - and then on to their destinations anywhere across the country:
The government is insisting that its 'herd immunity' strategy has been abandoned, even though the truth keeps surfacing.
But while the UK endures lock-down, the Tories are doing nothing to prevent infected passengers from entering the country - even those arriving from the worst-hit places.
Herd immunity is alive and well. Because of government decisions, many more people in the UK will not be.

Health Secretary admits to nineteen NHS staff while trying to weasel out of responsibility. The real number is much higher
(Saturday 11 April 2020)

Matt Hancock has finally 'admitted' that 19 NHS staff have died of COVID-19.
Except they didn't. At least 28 have died.
Hancock used the admission to try to weasel out of the Tories' responsibility for not providing PPE - personal protective equipment - that has constantly exposed NHS staff to infection.
He said he found it 'very upsetting'.

Eight days ago, Hancock said 'and some nurses' had died.'

Not important enough to quantify?

Which way are you leaning in explaining why our government can't get its act together?

A postscript, thanks to Skwawkbox, published a few hours after this post was first issued:

Health Secretary admits to nineteen NHS staff while trying to weasel out of responsibility. The real number is far higher 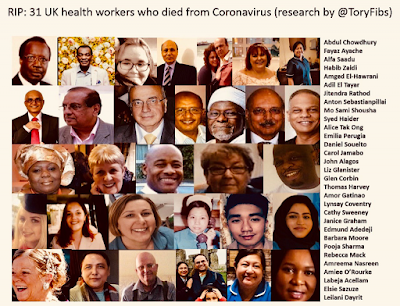