The man who knew his destiny was to be prime-minster dared the gods to do their worst and shook the hands of Covid-19 patients when he visited a hospital at the end of February. A few days later on 3 March 2020, he boasted about his actions accompanied by his medical and scientific expert who did not dissent from Johnson's statement that it was all about washing hands. Google 'Johnson shaking hands' and find the video performance of the buffoon. By early April, he had been admitted to hospital with Covid-19 and spent two nights in intensive care. Today he is back, leading the nation.


Consider what is happening very carefully.

Do you hear the mainstream media asking the questions that are crying out for answers?

Why did you not move to lockdown earlier?

There is little or no focus on such a vital matter. It is being 'nudged' out of the picture by a media intent still on colluding with this government of Tory neoliberal mediocrities.

Why did you not listen and act on the scientific and medical advice that you must have heard and rejected and instead opt for a half-baked, pseudo-scientific idea of achieving herd immunity?

Did you do as little as possible in order to steal a market advantage on economic competitors?

How do you feel now, Mr Johnson, when you got it so terribly wrong?

How do you feel now, Mr Johnson, with so much blood on your hands?

How do you feel now, Mr Johnson, knowing that your mad decisions have cost the lives of tens
of thousands of British people?

Do you hear the mainstream media asking these kind of questions?

What I  hear now is the latest news from Skwawkbox about how deadly your folly has been:

Figures tell the truth the Tories and the 'mainstream' media won't


The Tories and their friendly media are telling us this morning what a boost to the nation it will be when Boris Johnson is back.
The UK population of around 65 million represents less than one percent of the global population of over 7 billion. Yet even the government's admitted death toll - 20,732 as of today - represents 10% of global deaths from the virus: 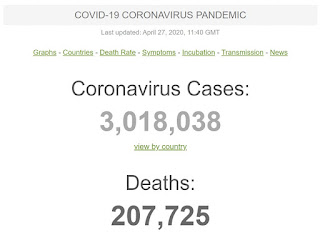 But the reality is far, far worse. First the SKWAWKBOX and now even the Financial Times and the Office for National Statistics warned that the real number of coronavirus deaths in the UK, including the hidden carnage in care homes and other non-hospital deaths, is more than double the official total - approaching 50,000.
More than 20% of the global death toll so far.
And the UK's figure is likely to be higher still, when the real hospital toll - hospitals say the government is only reporting around half of the deaths they are seeing - is known.

Johnson's insane 'herd immunity' plan - the 'take it on the chin' approach that has only been modified but not abandoned - is a cull of our vulnerable that, at best, is criminally negligent. Given what Johnson knew in advance, it is more than that.
Johnson's disregard for the safety of UK people plain as media trails his plan to lift lock-down just as NHS circulates information of serious complications of COVID-19 in children 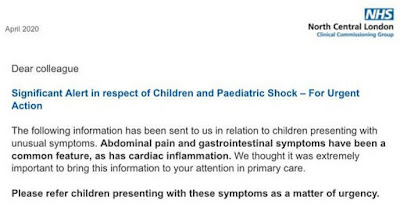 The press are trailing Boris Johnson's plan to ease the UK's lock-down restrictions ahead of his return tomorrow. The Tory buffoon, whose 'herd immunity' plan has never been abandoned in spite of media spin, intends to allow some businesses to open - and to re-open schools: 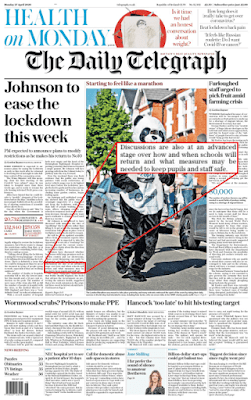 But the NHS has been circulating an urgent notification to medical staff, tweeted on Sunday by a number of doctors and medical organisations including the Paediatric Intensive Care Society, advising them to watch out for serious complications of coronavirus infection in children - previously said to be relatively untouched by the virus but now increasingly frequent.


The symptoms include inflammation of multiple organs - and even of 'atypical' inflammation of blood vessels (Kawasaki disease) and the heart occuring 'commonly', and 'toxic shock' with potentially fatal complications - along with 'strange' and unexplained rashes, abdominal pain and stomach upsets.


Yet Johnson - who was ready to see hundreds of thousands of people die in the pursuit of 'herd immunity' - with that news in hand is now planning to reconvene schools and put children in danger.


Not to mention the risk to their older relatives who may become infected even if the children escape the worst effects of the virus.

The PM today seemed to say there will be no early lifting of lockdown. Can his words be trusted?