MAYBE THE MAINSTREAM MEDIA IS OPENING ITS EYES

The Mirror on line today was critical of Boris Johnson's address to the nation yesterday on two grounds. He talked about his government's 'apparent success' in tackling the Covid-19 crisis; the Mirror pointed out we were heading for the highest death rate in Europe. He didn't talk enough about the crisis in care homes. The rate of daily deaths in care homes is actually increasing.

The Mirror is sounding a critical note, albeit still respectful in tone.

So far so good. The road to the place where the little boy says the emperor isn't wearing anything has to start somewhere.

Tom Peck in the 'i' today was even stronger. Here's a taste.

'When Johnson went into hospital three weeks ago, there had been 5,000 fatalities from coronavirus. There have now been 20,000, at least, and countless more in care homes. (Countless not in the sense
that they cannot be counted, just that no one has bothered to.) ….

"I know that there will be many people looking now at our apparent success ..." [said the PM yesterday].
Excuse me, Prime Minister? "Apparent success"? ....

Johnson and Trump stand alone on the world stage in their crushing failure to manage the response to coronavirus. The UK's death toll will surely surpass Italy's, after we were offered long weeks in which to learn their lessons and chose not to.

Instead, the Prime minister went on TV to brag about shaking hands with coronavirus patients, then went to a Six Nations Rugby match at
Twickenham, weeks after Italy had cancelled all their matches in the competition.'

Some at least of the MSM are catching up with Skwawkbox.

Boris Johnson returned to the public eye this morning - and immediately picked up where he left off, misleading the public and lying outright about his government's performance and its impact on the NHS and the millions who rely on it.
Most scandalously, he dared to boast that his government had 'defied expectations' by preventing the NHS from being overloaded and that there had been spare ICU and ventilator capacity at all times:
That 'spare' capacity has been achieved by sending elderly people back home or to care homes to die knowing they are infected - spreading the infection to thousands of others just as vulnerable.
The number of deaths outside hospitals is more than the toll inside hospitals - and the Tories have kept beds empty and ventilators free at the cost of denying care to tens of thousands of people: 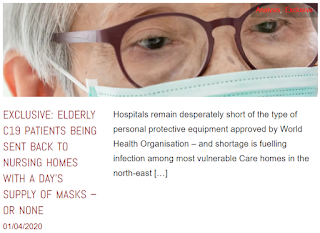 And the Tories have fostered the illusion of a 'coping' NHS by persistently understating the number of health workers who have died because of the constant lack of personal protective equipment - even today, Health Secretary Matt Hancock said around 90 have died when the total is approaching 140.
In reality, the performance of Johnson and his party has led to the UK, which has less than 1% of the world's population, having 10% of global coronavirus deaths, even on the government's admitted figures - and the real figure is more than 20%.
How dare he boast?

Dr Abdul Mabud Chowdhury warned of fatal consequences of government's failure to provide protective equipment to NHS staff - then died of coronvirus. Hancock's condescension when confronted by his son is appalling
(28 April 2020 - Skwawkbox)

The appalling Matt Hancock was confronted this morning during an LBC interview by Intisar Chowdhury, the son of Dr Abdul Mabud Chowdhury. Dr Chowdhury died of COVID-19 after warning the government that its failure to provide adequate PPE (personal protective equipment) was going to cost the lives of health workers.
But Hancock didn't only refuse to acknowledge that there had been failures.

Instead, he went on to condescend disgustingly to the bereaved Intisar Chowdhury, telling him he'd been 'very brave' to speak out - and how complicated the 'logistics' of delivering PPE are:
More than 150 healthcare workers have died. The government continues to understate the number - and Hancock's arrogance makes the Tories' arrogance even more disgraceful.

CAN YOU HEAR THE SOUND OF ANGRY MEN AND WOMEN YET?