More stories from the world of Skwarkbox - why do I find their take on reality more convincing than the stories being circulated by members of this Tory government?


The government has boasted that it has now tested 'over 2000' NHS staff for the coronavirus - just 0.15% of NHS workers.


99.85% of staff have not been tested - and Tory minister Robert Jenrick made it clear this morning that the UK's capacity is being used to test 'critically ill patients':

Medical experts say tests of hospitalised patients are a waste of capacity - critically-ill patients can be seen to have the virus from the symptoms they are manifesting and need to be treated accordingly - and say that capacity should
be focused on 'well' staff.


An Italian study has shown that 50-75% of people spreading the virus at any given time have no symptoms, making 'well' staff a key vector for infection, especially when they still have little effective personal protective equipment - yet the government is boasting about its minuscule level of staff testing, while directing most of what its unpreparedness has made available in the wrong area.


Last month, Boris Johnson said the UK would 'rapidly' have capacity for 250,000 coronavirus tests a day. That was downgraded this week to 25,000 a day - and only hopefully by the end of April.

Department of Health confirmed to SKWAWKBOX that it claims to have delivered masks, not that it plans to deliver - yet frontline staff say no way and video evidence supports them
(Monday, 30 March 2020)

Furious NHS staff are dismissing the Tory government's claims to have delivered 170 million FFP3 face-masks to NHS staff on the front line of the fight against coronavirus.
And within minutes of the government's claim, video evidence supported the staff's angry rejection of the government's boast.
The Department of Health confirmed that Robert Jenrick's claimed deliveries did mean deliveries actually completed - during the last two weeks.
The Department also said that all the masks are FFP3 standard - the highest protection available. The World Health Organisation recommends a minimum of FFP2 grade and preferably FFP3.
Yet minutes after Jenrick's claim during the government's televised afternoon press conference, staff were shown wearing simple 'surgical' face-masks - which provide minimal protection against coronavirus protection.
Even staff taking samples from those with suspected infection:
Medical staff also appeared on TV to confirm that they and their teams are still without the right kind of protective equipment - and in some cases without any at all.
Jenrick also claimed to have delivered "42.8 million gloves" - not the usual 'pairs of gloves'.
Since NHS staff will need to change gloves far more often than masks, the smaller number of gloves is curious.
But the Department of Health was not able to confirm whether Jenrick meant 'pairs of gloves' - or was stating the number of individual gloves to make the total delivered seem larger.

The government's much-vaunted delivery of personal protective equipment (PPE) is finally arriving in the hands of some NHS staff - even though the Department of Health claimed it had all been delivered over the past two weeks.

But NHS workers on the front line are reacting with horror - though not disbelief - because the equipment, including masks and other PPE is clearly old, expired and has simply been re-dated with a new expiry date.


Nurses are posting pictures of the equipment they have received - and the old, long-past dates are still clearly visible underneath the hastily-applied new labels: 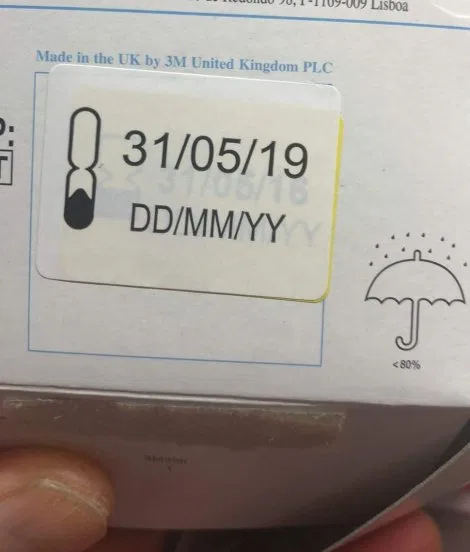 The fact that NHS staff were being given expired equipment is not new - Lancet editor Richard Horton tweeted about it last week:

NHS COVID-19 UPDATE: "Totally inadequate PPE. No N95 masks. Being sent like lambs to the slaughter." "Could you please highlight that there is still not enough PPE." "The current policy of PPE triage is unreliable and not fit for purpose." And this: expired supply. pic.twitter.com/Kr7rZB4MFF
— richard horton (@richardhorton1) March 24, 2020

But the government is now trumpeting its supposed new deliveries of life-saving PPE - which appear to consist of the same expired equipment re-labelled.
So hasty has been the relabelling that in some cases even the new sticker is expired, with some of those involved in printing new stickers reverting under pressure to 2019 instead of 2020, as you can see above.

Johnson may claim to have u-turned on his 'take it on the chin' stance - but New Zealand's Labour PM says she never considered it for a moment
(Tuesday, 31 March 2020)

New Zealand's Labour PM Jacinda Ardern has put out a video which, while not specifically naming Boris Johnson, clearly refers to the 'herd immunity' he and his advisers were planning until shamed into at least a superficial change by public awareness of the enormous death toll it would have created.
In sharp contrast to Johnson's approach - he referred on TV to 'taking it on the chin' and letting the virus run - Ardern's humanity shines through as she makes clear she would never countenance any plan that would mean consigning many thousands of her people to death.

Ardern told her nation the truth that herd immunity needs 95% of the population to be immune for it to protect those without - a number entirely in line with the advice of medical experts who spoke to the SKWAWKBOX but at odds with the government's claimed 60%.
95% immunity in the UK - without a vaccine - would mean around 2 million deaths, given the 3-4% mortality seen in European countries afflicted.
But Ardern doesn't sugar-coat the pill of the challenges her country and the world face as they try to protect their people - at least those governments who want to.
Real leadership, by those fit to lead, looks very different to what the UK has to tolerate now.

ADMINISTRATIVE MALFEASANCE
IS WRONG-DOING, ESPECIALLY BY A PUBLIC OFFICIAL
DO REMEMBER THE LEGAL TERM