THIS PRIME MINISTER LED US INTO THE WORLD OF HERD IMMUNITY - WE ARE NEARING 100,000 DEATHS

The responsibility for our carnage lies primarily with the prime minister and his special advisor - Johnson and Cummings - who made the wrong decisions back in February last year. Their actions and inactions then are part of the sequence of neoliberal Tory misgovernment that followed.

I have spent my lockdown charting this tragedy in Dying to Know and am now back on the familiar path of finding a literary agent/ publisher. My book is well worth reading. I am the historian by academic training and I have become a fledgling scientist and economist for the purposes of my pandemic tale. This will be my third publication.

Here is the latest twist in this sordid story, courtesy of SKWAWKBOX today:

'Operation Absolve Boris' has begun. The Conservative party, which can never quite disguise its contempt for the Labour-founded NHS, has sloughed off even more of the facade to start its campaign to water the idea in the public consciousness that the blame for Boris Johnson's appalling and frankly murderous handling of the pandemic crisis rests with the NHS, not the Bullingdon boy.

Former Tory MP Matthew Parris was on Sky News this morning (thanks, reader and Labour activist Val Colvin for the pointer) - and Parris not only suggested that the latest scandal of slow vaccine roll-out was the NHS's fault, he 'jumped the shark' and suggested that he couldn't think of anything that Johnson could have done differently to reduce the scale of the UK's pandemic disaster, which has left this country with one of the world's worst death rates and worst economic collapses:

Parris is not alone, with various Tory voices being given media time - or making comments on social media - to attack the NHS and shift the blame onto our underfunded and austerity-withered Health Service. Tory MP

Lucy Allan 'liked' one such attack calling for the complete abolition of the NHS: 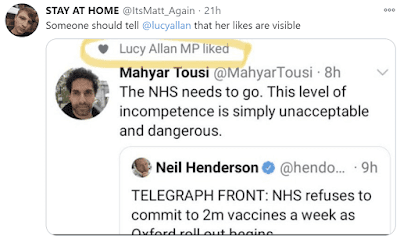 Allan deleted it after the public challenge and did not respond to a request for comment.

But Parris's willingness to rewrite history stands out. Blaming the NHS for the snail's-pace roll-out of the vaccine is bad enough, but the idea is beyond bizarre that Johnson has done nothing untoward and the UK's atrocious outcomes are just some mystifying phenomenon that nobody understands.

From the early days of the pandemic, the gaping flaws in Johnson's response were unmissable - and widely criticised: 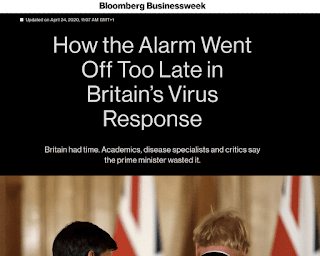 And as the crisis progressed, the bungling, arrogance and straightforward dishonesty continued to pile up:

Watch the media with an eye open for subtle - and not so subtle - attacks on the NHS and the manoeuvres of 'Operation Absolve Boris' and you'll soon see they're as frequent and piled high as Johnson's fatal mistakes and deliberately lethal policies.

Just don't let it pass without comment and make sure your friends and family are alert to what the Establishment is doing. They'll certainly never hear that warning from the so-called 'mainstream' media.'

PLEASE DON'T LET THEM GET AWAY WITH REWRITING HISTORY.