NO IFS OR BUTS - SCHOOLS SHOULD BE SHUT

More SKWAWKBOX material - this is a nightmare - living in a land where misgovernment has become so blatant it hardly raises an eyebrow within the mainstream media.

And not a mention on Marr of mass school union action

Boris Johnson appeared on the BBC's Marr this morning and was asked by Marr whether parents should send their primary-school children to school tomorrow. Johnson launched into a performance in which he claimed that:

·         schools are safe, even though his own SAGE scientific committee says the pandemic can't be controlled without closing them

Johnson looked like he was parodying comedian Matt Lucas's parody of him:

Shamefully, in a discussion of the topic of whether schools are safe and parents should send their children in, Marr completely failed to mention that the National Education Union (NEU) and Unison have told their members in primary schools not to go to work tomorrow because schools are emphatically unsafe, while the National Association of Head

Teachers and NASUWT are taking legal action against the government because schools are unsafe. Such is the state of the BBC.

Meanwhile, approaching 200,000 education staff have signed the NEU's petition to protect communities by making schools safe, in only around eighteen hours.

The NEU, the UK's biggest teaching union, and Unison, the UK's biggest union, have today both said they will tell members to use their legal right not to work in unsafe environments to refuse to attend primary schools from Monday. The Tories have announced that schools in London and the south-east will not open next week, but have left other parts of the country - including other tier-4 areas - to face soaring coronavirus rates and needless deaths, despite now acknowledging that schools are fuelling the pandemic.

The NEU reached the decision at an emergency meeting of its executive, while Unison's head of education has tweeted confirmation that it will give the same advice to its members:

Meanwhile, the National Association of Head Teachers (NAHT) and the NASUWT have announced legal action. School unions are in lockstep that schools are absolutely not safe to reopen.

But at the time of writing, neither Labour's leader or deputy leader, nor its Shadow Education Secretary, have so much as tweeted about the issue, let alone put out a message of support or solidarity. They have tweeted on other topics, so cannot claim they have been away from their social media.

This is not a new phenomenon: Starmer and Green sided with the government against the unions on facemasks - and Starmer declined to say during a radio interview that he would support unions trying to keep their members safe.

Labour and union members have been signing an open letter demanding that the party unequivocally stands with the unions. They have so far also been ignored.

SO what exactly is the point of Labour's current leadership?

Just before the break, Starmer's Labour was still insisting schools must stay open

The Labour party yesterday frantically tried to rewrite history to pretend its collusion with the Tories to keep schools open had never happened. The facts say otherwise - Labour has not only applauded the Boris Johnson's anti-scientific determination to have children in school and joined in his insistence that 'schools are safe', Keir Starmer and his acolytes have pushed the government - 'no ifs, no buts' - when they thought Johnson might drag his heels or lose his nerve.

Starmer even sent Johnson a secret letter promising to support him on the schools issue.

And that stance had not changed up to the Christmas/New Year break - as this clip from the 20 Dec Marr show on the BBC shows.

Marr asked Nandy to give a 'straightforward answer' on whether the re-opening of schools should be delayed - and said 'No':

Today, the National Education Union has told its members not to go to school on Monday and instead to exercise their legal right to boycott unsafe workplaces - and fellow unions NAHT and NASUWT are making similar noises.

Starmer shares Johnson's guilt for the current huge numbers of infections - and the tens of thousands of needless deaths - that have resulted from the determination to ignore the clear scientific consensus that schools have been driving what must now be considered the third and deadliest wave of the coronavirus pandemic. 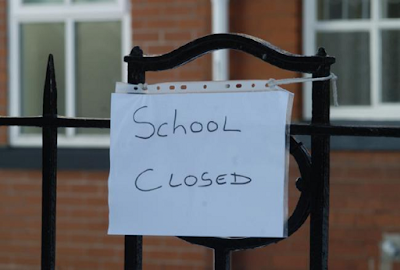 The National Education Union has told its members that they must not return to work on Monday, referencing the strains on the NHS and the lack of effective steps by the government to make schools safe against COVID transmission.

Calling on the government to delay the opening of schools until at least 18 January and to move schools to online learning, NEU Vice President Daniel Kebede - who will appear on Socialist Telly's Skwawk Talk on Monday night - told teachers:

Our Heads and School Leaders have been amazing. However the Government have failed to deliver the resource we need.

As a result transmission of Covid in schools has been driving transmission in communities. This has pushed our NHS to breaking point.

The Government must do the correct thing and delay the opening of schools until the 18th January. Schools must move online and be open to Vulnerable and Key Worker children only.

If the government don't do what is right, and delay the opening of schools, we will action our legal rights under Section 44 of the Employment Rights Act.

Schools are not safe for our young people, our educators or our communities.
Education will continue remotely. Do not go into work for Monday's INSET, work from home.

Once again - and in spite of the lack of support from Keir Starmer's Labour party - unions are leading the way to protect their members and the children they teach, while the government recklessly refuses to act for most of the country, despite now acknowledging that schools are the engine of the pandemic.

CAN YOU SEE WHAT I MEAN WHEN I SAY THIS IS A NIGHTMARE OF MISGOVERNMENT?

I hope you have found this BLOGPOST worthwhile. It would help my path to publication for my book 'Dying to Know' if you would press the Follow button at the top of the blog post (on a full screen) - 29 followers to date. Thank you.