THE CHARGE AGAINST JOHNSON AND CUMMINGS IS, M'LORD, THE PURSUIT OF HERD IMMUNITY

'Yes', said Mr Johnson, when pressed. 'There will be an inquiry about the pandemic, but now is not the time'. For as long as they can, Johnson and Cummings will kick the matter into the long grass. They will muddy the waters and lay any blame as far away as possible from their actions - and, critically, lack of action. Johnson and Cummings are, if you haven't realized, the de facto government of Britain. Hancock, one of their lackeys, has in his role as minister for health just disbanded one of the key actors in the pandemic - Public Health England - and written on the back of a postage stamp the name of its successor: the National Institute for Health Protection. Why this change should be made now is a reasonable question. 'Muddying the waters' would be my answer, together with 'blame-laying'. Across Europe, such national bodies are headed by eminent scientists. Johnson and Cummings have appointed Dio Harding, a woman with no scientific background and a poor record as a manager, as the new CEO. She is however very well connected in Tory elite circles - a Tory lackey to be developed.

Difficult to believe, all this - especially in the absence of an effective opposition voice in parliament and in the media. The MSM - mainstream media - is colluding with the Tories in power, and so too is the Labour Party under the leadership of Keir Starmer, in relation to this pandemic.

Here's one familiar voice of sanity to consider: Jeremy Corbyn. More from him later.

Difficult to swallow - the proposition that Johnson and Cummings are directly responsible for the excess deaths in our country between March 2020 and now. Nearly all of the seventy thousand citizens of our country who are the bodies in those excess death figures would still be alive if it were not for Johnson and Cummings. Difficult to swallow - but can you disprove that fact?

My pandemic journal, a most interesting literary venture, will be published to coincide with the arrival of a vaccination schedule to provide immunity against the Covid-19 virus. In that book, you will find along with much else the history of the Johnson and Cummings approach to the virus from January

through to the end of March. Will it be a preview of the findings of the public inquiry? That would be wonderful - but I doubt it. Any public inquiry, if it happens, will likely, eventually, produce a report soaked in white-wash.

The more of us who know the truth, the more chance there is of securing justice. Johnson and Cummings are culpable.

Back to Jeremy, courtesy of SKWAWKBOX:

Labour leader Jeremy Corbyn has confirmed what we all knew: that the Tories' initial plan for dealing with the coronavirus pandemic was to allow hundreds of thousands to die in the pursuit of 'herd immunity'.

Boris Johnson's Chief Scientific Officer described the plan in several media appearances, while Johnson himself told interviewers about 'taking it on the chin' and letting the virus run quickly through the population. The SKWAWKBOX immediately pointed out that, with the mortality rates outlined by the World Health Organisation and seen in the Chinese outbreak, the plan would mean letting half a million people die and potentially many more: 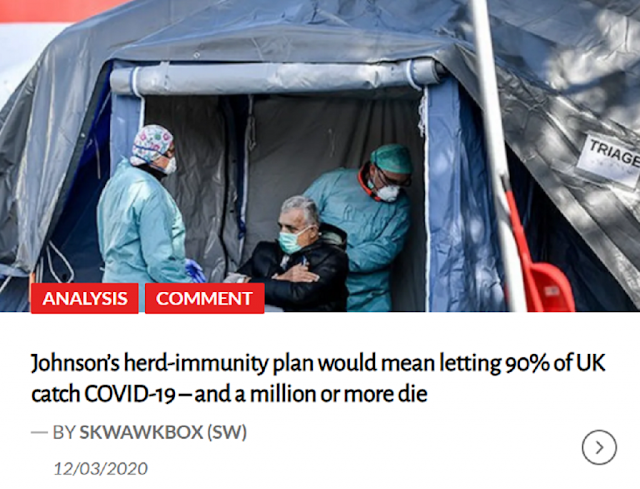 The Tories did more than publicly back-track on the plan when pandemic experts pointed out the huge loss of life involved. They pretended it had never existed - even while they continued to pursue it and just changed the language used to describe it.

But in a podcast with left-winger Grace Blakeley, Corbyn confirmed:

Corbyn also confirmed that Boris Johnson admitted in a meeting between the pair that he "didn't want to introduce the furlough scheme" and that only "robust" pressure from John McDonnell and the trade unions secured the scheme - a fact revealed exclusively at the time by the SKWAWKBOX.

Corbyn went on to highlight the way in which the coronavirus has "exposed and writ large... inequalities in our society" and condemned "corporate welfare", arguing that:

if we're putting money into big companies... then we should be putting in government appointed directors as well to make sure those companies work in the public interest.

Boris Johnson's intentional pursuit of herd immunity and his weeks-long delay in lockdown or taking any serious measures to prevent its spread is calculated by scientists to have cost as many as 40,000 lives avoidably lost, including a massacre in care homes - increasing to 60,000 by the end of the first phase of the outbreak.

The former 'Bullingdon boy' has refused at least twice even to express regret for the needless deaths his actions and inaction had caused.'

THERE YOU HAVE IT. PLEASE BE ANGRY.

REMEMBER THOSE WHO HAVE DIED NEEDLESSLY.