It is difficult to word this blog-post's title in a way that is concise and cogent. I have done my Sunday best.

I will not be joining the exodus of socialist members from a Labour party under Keir Starmer's leadership. Skwawkbox estimates that Party membership has fallen from 552,000 - the number who voted in the leadership election - to around 450,000. The present Party leadership claims a membership of 580,000. That would appear to be a lie. Let's call out a spin for what it really is.

I am staying because I am appalled and I want an opportunity to do something about it. There may well be a vote of no-confidence next year in Keir Starmer's leadership. There are enough socialists left in the Party to ensure that happens. Remember how the right-wing in the Party organised a coup against Jeremy Corbyn when he was a leader? The vote of no-confidence that they orchestrated went overwhelmingly in JC's favour. So a taste of their own medicine is due next year - and this time we must do what we can to produce an overwhelming majority for a vote of no-confidence that will oust Keir Starmer from his position.

Over to SKWAWKBOX now, to explain the reasons that underpin my frustration and anger with the current leadership: 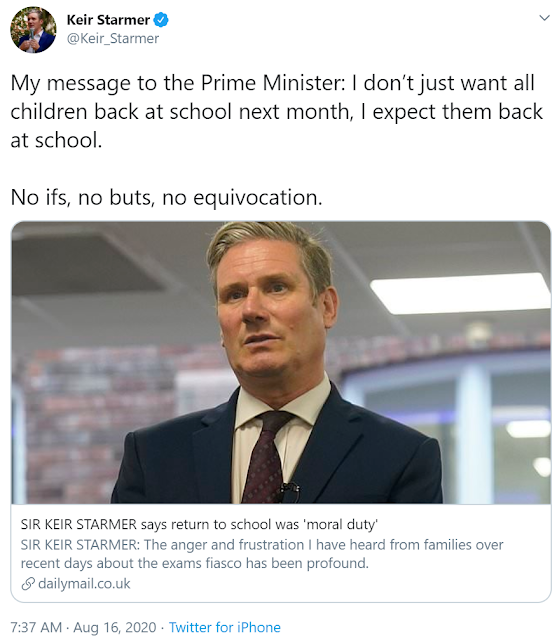 Labour leader Keir Starmer has decided to break with months of his collaborative approach with the Tories and talk tough - by demanding they send children back to school, no matter what.

And he decided to do it in one of the worst right-wing rags.

Just in case anyone had forgotten his slap in the face to the Black Lives Matter movement, or his failure to

protect left-wing Jews, Starmer went to the Daily Mail to issue his 'ultimatum', a rag that has ceaselessly attacked the left, whipped up anti-immigrant sentiment and was forced to issue an apology for smears against left-wing group Jewish Voice for Labour.

Starmer chose to talk tough on an issue of massive importance to parents and unions - and, not for the first time, to do it against their interests.

And he chose to do it just as the emergence of a second coronavirus wave becomes clear - and yet more studies confirm the ease and speed with which the virus can spread within and from schools and create new waves of infection.

THIS IS A KIND OF MADNESS. KIDS AND TEACHERS AND PARENTS REMAIN A LETHAL MIX. CHECK OUT THE SKWAWKBOX LINKS. 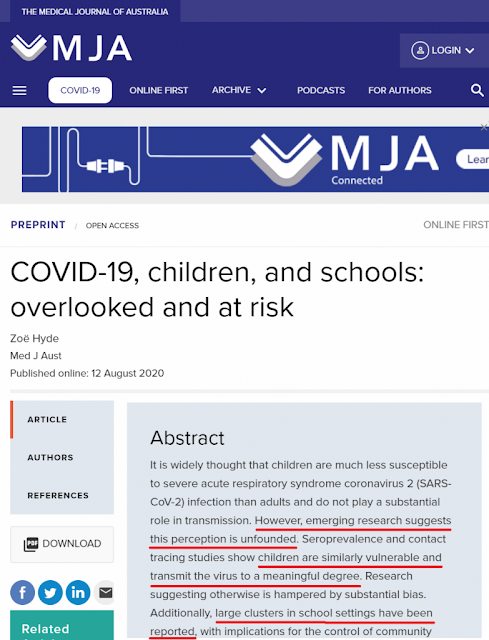 AND HERE IS THE EVIDENCE FOR FURTHER BETRAYAL OF THE INTERESTS OF THE PEOPLE:

Labour leader Keir Starmer has twice declined to deny, during an interview with Channel 4 News, that the party's lawyers said it would win a libel case brought by 'whistleblowers' who attacked the party during last year's widely-derided Panorama programme - or that he made a 'political decision' to pay out a figure reported to be around £600,000 rather than take the case to court.

Instead, Starmer hid behind the excuse that he wasn't going to discuss legal advice - but if the answer was 'no', he had ample opportunity and reason to do so:

Starmer's decision to roll over instead of fight emboldened Labour's enemies to threaten and issue further legal action and, according to reports, risks bankrupting the party. His general secretary David Evans has also written to local parties banning them from expressing their own opinion on the climb-down.

KEIR STARMER STOOD AS A CANDIDATE PROMISING TO UPHOLD 10 PRINCIPLES OF SOCIALISM ASSOCIATED WITH JEREMY CORBYN. HE PRESENTED HIMSELF AS A FIGURE OF CONTINUITY. IT DOES NOT LOOK AS IF KEIR STARMER IS A MAN OF HIS WORD. THAT ALONE BRINGS INTO QUESTION HIS SUITABILITY FOR LEADERSHIP.