And so it goes on. On the third day of January 2019, Harry Marshall from the United States (I'm not sure where in the States yet) left a Facebook message on the Jago Stone webpage, saying that he and his family had a painting by Jago.

'It is of "Little Bandy Legs" of Chacomb … we lived in this stone/thatch roof house for one year. I also have a newspaper article of him presenting a picture to the President (Gerald Ford) of Sulgrave manor. This comes from the Banbury Guardian paper.'

I replied saying how exciting it was to get news such as this - and then realised that Harry had already followed up with an image of his painting attached to another email. Here it is:


As I remark in Jago's biography, the American government knew the value of looking after its defence personnel overseas. Those who were not housed within the perimeters of Upper Heyford and 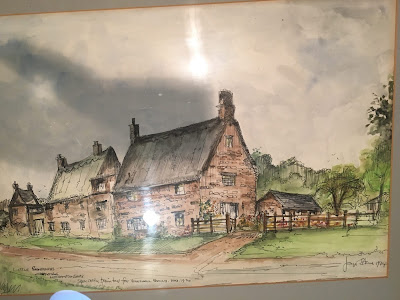 Within a day, Harry had sent me another email and another attachment. I now had the photo with which I was already familiar having received a copy from Mark Donohoe in New Jersey back in March 2017 via Facebook. But the Banbury Guardian article was new to me.


Here is the transcript of the caption to the photo:


And here is the transcript of the Banbury Guardian article:

PAINTING FOR THE PRESIDENT

A picture of Sulgrave Manor, the ancestral home of George Washington's family, may soon be hanging in the White House at Washington.

Painted by well-known Cotswold artist, ex-jail-bird and author Jago Stone, this picture is a gift to American President Gerald Ford from the British communities near the USAF bases at Heyford and Croughton.

Jago travelled to London to visit the United States Embassy where he handed over the painting. They promised that the gift would be forwarded to the President.

Jago, who won the American Arthur Koestler Award [Arthur Koestler (1905-1983) was born in Hungary and became a naturalized British subject; there is no American citizenship] for painting 10 years ago while serving a 15-year prison sentence [10 years, in fact; Jago was released in 1967 after serving seven years] for robbing the Archbishop of York of antique silver, is a well-known figure at the American bases. He has painted a number of pictures for personnel stationed at Croughton and Heyford.

Commented Jago: "The painting is a gesture of friendship to the many American friends of the British community. It is a sort of bicentennial gift to the President."

Finally, an image gifted me by John Michael Adamski, son of Lieutenant Colonel (retired) John 'Adam' Adamski for whom this similar image of Sulgrave Manor was painted by Jago (undated): 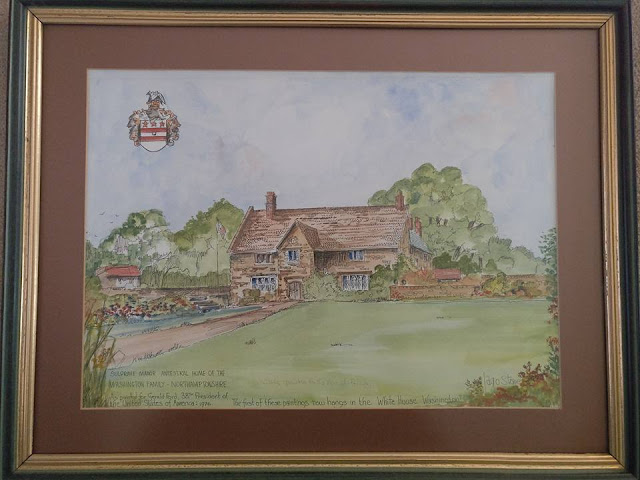 My catalogue of Jago paintings that have crossed the Pond grows each month. Do please keep sending me stories and images. Jago's work and life-story deserve to be better-known.