Having spent several years researching the remarkable life of Jago Stone, I had inevitably discovered the Ancestry website. I am providing a link - press here - but note my caveat: make sure you are prepared for what may follow. At the very least, justify in advance the hours spent at the screen pursuing the Ancestry hints about family members and reflecting on the fleeting nature of a life span.

A chance return of a memory of my grandad in Canterbury prompted the research I began a couple of months ago. That memory had been sparked by the sorting through of my study that had led to a rearrangement of the photos and art-work propped up against the banisters on the landing. I was now waking to the sight, through the open bedroom door, of the image of my grandad - Benjamin Bertie Blissett (1884-1964) - that my mum had gifted me sometime between 1992 and 1994. This would have been after the death of Don, my father, and before her own death in January 1995 at the age of 84.


Grandad has become for me a figure to celebrate. As a child, however, I had been steered well clear of him. My mum was conflicted about her working-class origins from a terraced street in Canterbury but one part of her was always firmly rooted in that Kentish cathedral city where she started work as a girl in Finch's making sweets before attracting the attention of the young army sergeant  from a terraced street in Sidcup in north Kent - my father-to-be - who married her in 1930. Every year or so, there was the ritual visit to be made - she and me, her little son, during a primary school holiday - to the city of her birth. All this, courtesy of an East Kent coach that stopped half-way for the passengers to enjoy a comfort break and food at a carefully selected hostelry. 'Don't forget the tip for the driver!' became a catch-phrase at home. From Bexley, now swallowed up in London, along the A2 to Canterbury and back in a day. My father never came, at least not in person.

In the few hours that Mum had been gifted in Canterbury in 72 Military Road where she had been born, she chatted to her mum and to her brother - Uncle Sonny - and his wife, Madge, who lived next door whilst I was left to my own devices. I remember the front-room, covered completely in framed photos. No-one ever explained who they all were. The image of my grandad which I now see first thing in the morning would have been up there on one of those walls. So too the framed picture of my dad as a young soldier that my mum also gave me when I visited her, now the widow, in their unlikely home they had moved to on a housing estate in Leyland, Lancashire, when my father retired. I also remember from those Canterbury visits Uncle Sonny's pigeon-loft at the bottom of their narrow strip of garden. Next to the outdoor-toilet and in front of the wall that separated these decaying homes from the Church grounds on the other side.


As for Grandad, a glimpse at best. That's when I added a new word to my emerging vocabulary:  'skulking'. As in 'Skulking off to the pub again!' One tale I overheard, I came to relish. Grandad would stand in his decrepit best on the corner of the A2 as the arterial road wended its way through the city. As the East Kent coaches slowed to ease round the bend and head off to Dover, my grandad - then in  his seventies - would reach out a begging hand to receive from the compassionate fingers of the coach-driver, leaning out of the open window, some of the tips that his own daughter had possibly contributed to earlier. Grandad thereupon proceeded to his local to buy a round of drinks.


In March 1963 - I can be certain of these timings thanks to Ancestry - the Gran who taught me how to play cards died of liver failure, aged 81. And a year later, in March 1964, Grandad passed away too. I recall being taken to the hospital where he died by my mum and her sister and seeing him weeping, standing in the ward, before I was escorted away, declared as too young to witness such things. Three years later I escaped to Oxford on a scholarship.


Ancestry research has provided me with the images and details that form part of this post. My mum's photo collection yields the other precious snapshots of the life of my grandad.


Here, in conclusion, the Short Service paper for my grandad, dated 1903: 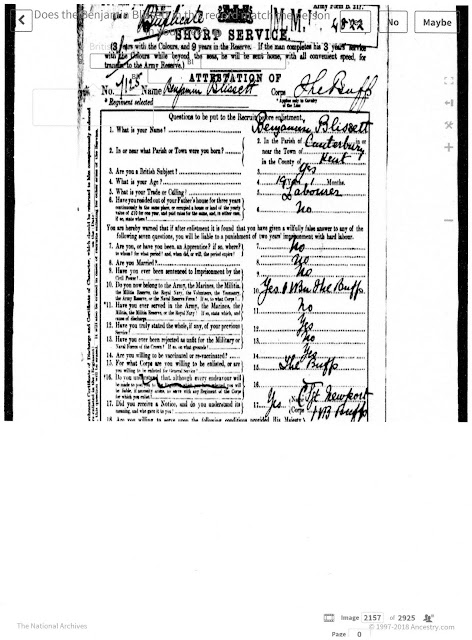 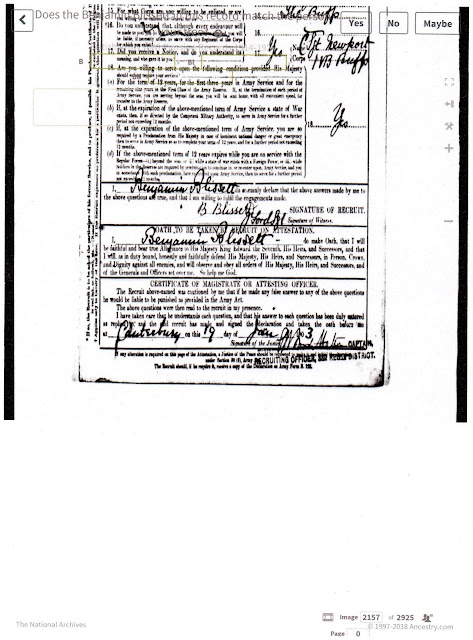