ALEX 'HURRICANE' HIGGINS AND RICHARD DORMER - MY THANKS

There are numinous moments in a lifetime when we seem to be touched by the Gods. You choose your own metaphor if you are uncomfortable with mine - but I hope you have had the joy of experiencing transcendence. For me, Manchester United beating Bayern Munich with two very late goals to become European champions in 1999 when I was aged 50; my first ascent of a mountain (Helvellyn), aged 16; and so on. Two will have to suffice in this introduction to a blog-post in which I am giving thanks to two people who have brought me a joy that left me utterly at one with myself and the universe - a snooker player and an actor who became that snooker ace; Alex 'Hurricane' Higgins and Richard Dormer.


A bit of background to explain more fully:

In 1970 in a Kidlington cinema outside Oxford, I watched the new American release: 'Mash'. I was blown away. These anarchic surgeons operating close to the battlefields of Korea were brilliant at

doing their job and intent on defying authority. It became my 'Mash' ideal: when I graduated and hit the real world, I would be so talented and yet always a rebel. That film has a lot to answer for!  A career was never for me. But that 'Mash' experience was seminal. Here's a visual aid:


As the Rotten Tomatoes review says:

Robert Altman's film about wartime Korea actually has very little to do with Korea and everything to do with the counterculture revolution, circa 1968 or so, going on in the good old U.S. of A.

And I - in the late teens of the 21st century - can still proudly say: 'I am a child of the 60s'. The career was no loss; I still want to see change; I am more than content to be the little boy telling the world the emperor has no clothes.

All in all, there is no surprise that I came to love watching Alex Higgins play snooker. We would have been in the same class if I had been born in the backstreets of Belfast. Alex Higgins was born on 18 March 1949. He was already the World Champion by 1972 and I only started watching 'Pot Black' - on a black-and-white TV! - in 1974. But once I discovered this brilliant player, I was hooked. He was truly a hurricane of movement. His was now an instinctive calculation of cue movement and table angles. Not only was he supremely good at his craft as a snooker player but he cocked a snook at convention. A rebel born of the counterculture revolution. My kind of hero. By 1982, Louise and I had the thrill of watching him on our colour TV reclaim his status as World Champion. That was a transcendent experience. Thank you, Alex.

There was a terrible price to pay for such unbridled talent. The pictures of Alex Higgins in his last years before his death on 24 July 2010 from starvation and lung cancer are heart-rending.

And so to my second thank you. I already knew the cathartic power of the theatre. London productions from time-to-time, the Oxford Playhouse often; there had been some sublime moments. Now - as we moved into the 21st century, living in Reydon outside Southwold in Suffolk, Louise and I settled into a pattern of regular visits to Norwich, 30 miles away, to see theatre, opera, and dance. In March 2004 (the programme I have is undated but I reckon it must have been 2004), we arrived at the Norwich Playhouse to see a one-man-show billed as a 'Snooker Ace tribute'. It was called simply 'Hurricane' and had been written and performed by Richard Dormer whom we had never heard of.


I suspect Richard Dormer gave the performance of his lifetime every night he was playing the part of Alex Higgins. He certainly graced us with an evening of thespian wonder. We emerged from the theatre knowing the Gods had gifted us an experience of a lifetime. Take in these reviews from 2003:

"Dormer's portrayal of a life lived at terminal velocity is exhaustingly energetic, yet it is filled with sadness and, like the glory days of Alex 'Hurricane' Higgins himself, it is a wonder to behold."
***** (5 stars) - The Independent 16 August, 2003

"Hurricane is a portrayal of one man's life - no more, no less. But it is surely one of the best works in this genre we will see this festival." The Scotsman 13 August, 2003

"I can't recall a more physically devastating portrait of self-destruction …. Richard Dormer blows away his audience with this terrific solo show." The Times 6/8 August, 2003

"Superlatives can only go half way to describe Dormer's performance." Irish Times

"Dormer electrifyingly manages to look like a cross between Higgins himself and a young mick Jagger … It's a tremendous performance which has us rooting for this 'crazed urchin who's crawled out of the slums', and one that befits Higgins's frenetic rock 'n' roll lifestyle." London Evening Standard 13 August, 2003

"Must see … will last in the memory." Belfast Newsletter 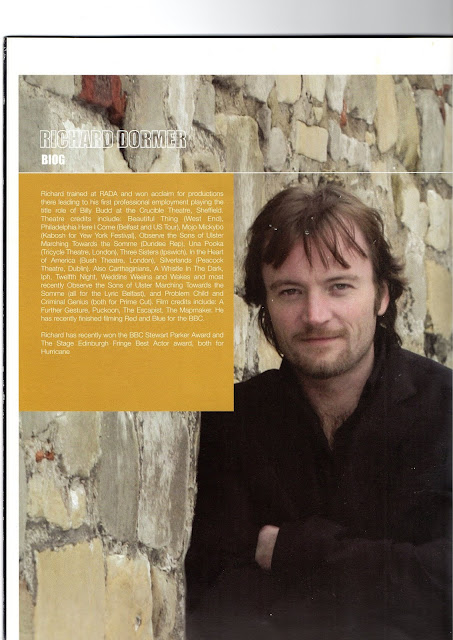 Where had this magician come from? Richard Dormer was born 11 November 1969 in Portadown, Northern Ireland. He trained at RADA in London and lived and worked in that capital before returning to his roots to live in Belfast. His wife is Rachel O'Riordan who directed 'Hurricane'. He won The Stage award for best actor in 2003. Alex Higgins himself watched the production of 'Hurricane' and gave his praise to his fellow countryman. Since then, there have been many more critically acclaimed performances in the worlds of theatre, film and television  - see this link for more detail.  Thank you, Richard, for acting as our Mercury from above.

Richard Dormer was born in the 60s. Alex Higgins was a child of the 60s. I salute them both.