I cannot fully recall exactly how the discovery happened. There I was, in mid-Google about a month ago, and I saw that a book which told a tale of a buried seaside hotel in Cornwall had recently been republished. It was called 'The Feast' and set in 1947.  Written by Margaret Kennedy, it had been published in 1950. The cover carried the accolades of the Guardian: 'Magic' and the Observer: 'The miniature charm of a Baby Austin'. It also quoted Anita Brookner who claimed the author was 'not only a romantic but an anarchist' and Elizabeth Bowen whose judgement was: 'Exquisite comedy ... Tense, touching, human, dire and funny'. Within a week, a copy from Waterstone's online service was safely in my hands.

Yesterday I completed my reading of this clever and extraordinary tale. I am very impressed and would like to share my discovery.

My ignorance about Margaret Kennedy may be shared by some of you. Writers move in and out of fashion and perhaps female authors may have been more vulnerable to disappearing from the literary

scene on the whim of contingency. Margaret Kennedy's grand-daughter is the novelist Serena Mackesey who describes 'The Feast' as one of the cleverest bits of metaphor-working ever'. 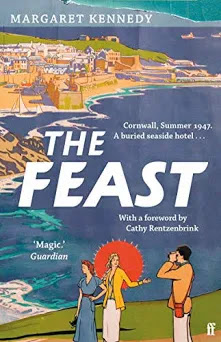 Be in no doubt of Margaret Kennedy's brilliance. Here is a copy of the Wikipedia article:

'Margaret Moore Kennedy (23 April 1896 – 31 July 1967) was an English novelist and playwright. Her most successful work, as a novel and as a play, was The Constant Nymph. She was a productive writer and several of her works were made into films. Three of her novels were reprinted in 2011.

Margaret Kennedy was born in Hyde Park Gate, London, the eldest of the four children of Charles Moore Kennedy (1857–1934), a barrister, and his wife Ellinor Edith Marwood (1861–1928). The novelist Joyce Cary was a cousin on her father's side.

She attended Cheltenham Ladies' College, where she began writing, and then went up to Somerville College, Oxford, in 1915 to read History. Other literary contemporaries at Somerville College included Winifred Holtby, Vera Brittain, Hilda Reid, Naomi Mitchison and Sylvia Thompson. She also became close friends with the Welsh author Flora Forster. Her first publication was a history book, A Century of Revolution (1922). Kennedy was married on 20 June 1925 to the barrister David Davies (1889–1964), who later became a county-court judge and a national insurance commissioner. He was knighted in 1952. They had a son and two daughters, one of whom was the novelist Julia Birley,[1] born 13 May 1928 and the author of at least 13 novels published between 1968 and 1985. The novelist Serena Mackesy is her granddaughter. Kennedy died at Flora Forsters's house at Adderbury, Oxfordshire on 31 July 1967.[2]

Kennedy is best appreciated today for her second novel, The Constant Nymph, which she adapted into a highly successful West End play that opened at the New Theatre, with Noël Coward and Edna Best in September 1926. Coward was replaced by John Gielgud during the run.[3] It was also successfully filmed in 1928 by Adrian Brunel and Alma Reville, directed by Brunel and Basil Dean, and starring Ivor Novello, Mabel Poulton and Benita Hume,[4] and again in 1933,[5] 1938 (for television),[6] and 1943.[7]

Kennedy's first novel had been The Ladies of Lyndon (1923). Among her later successes were The Fool of the Family (1930), a sequel to The Constant Nymph, and the psychological novel A Long Time Ago (1932). The Midas Touch (1938) was a Daily Mail book of the month, The Feast (1950) a Literary Guild choice in the United States, and Troy Chimneys (1953) the winner of the James Tait Black Memorial Prize. The darkly humorous The Heroes of Clone (1957) drew on Kennedy's experience as a screenplay writer. She also published a biography of Jane Austen and a study of the art of fiction, Outlaws on Parnassus.

Kennedy followed the stage success of The Constant Nymph (adapted in conjunction with Basil Dean) with three more co-written plays. The most successful was Escape Me Never (1934), adapting The Fool of the Family, which was also filmed twice.[8]

Of her postwar novels, The Feast (1950) introduces the disaster first and the characters who may or may not have perished in it afterwards, as in Thornton Wilder's The Bridge of San Luis Rey. The seaside hotel annihilated by the collapse of the cliff is replete with dysfunctional characters of all ages and sizes, so providing a fine balance of suspense, sympathy and even humour. Still, it works on other levels too. Her novelist granddaughter Serena Mackesy has called it "one of the cleverest bits of metaphor-working ever."[9] It was recently reprinted, as were Lucy Carmichael (1951) and The Midas Touch.[10] Her final novel, Not in the Calendar: The Story of a Friendship, involves a friendship between a daughter of a wealthy family and the deaf daughter of one of their servants.

There may be enough tasters in the above to whet your appetite for reading 'The Feast' yourself  - and perhaps for following me in my ordering of some of the other titles. One particular aspect of the book that I found so interesting was the light it shed on political life in post-war Britain. Margaret Kennedy brings together sixteen characters, seven of whom will perish in the climax that is already outlined in the beginning of the book - and the other nine survive. Some of these people have very decided views about the Labour government led by Clement Attlee that took power after the 1945 landslide election victory.

Here is the grim Miss Dorothy Ellis, the epitome of a spinster whose capacity for love and empathy has withered away, the housekeeper in the ill-fated cliff hotel, writing to an acquaintance:

'This Socialist Government does not look after poor people like they promised but they have brought rich people down, which is one comfort'.

Margaret Kennedy, you may recall from Wikipedia, read history at Somerville, Oxford - her quality of thought shines through in this passage from 'The Feast' where the focus is on shit, or more politely 'human slops'. Mr Siddal is an extraordinary literary creation. A brilliant intellect whose career at the bar has mysteriously failed, Siddal has retreated into a back room in the hotel whose creation is the work of his wife who is desperately trying to save the family from financial ruin. His role is to provide caustic and perceptive commentary on the inadequacies of others, whilst in effect celebrating his own worthlessness.

'Siddal conveyed an immense uncertainty as to the nature of slops and their place in the scheme of things. But after a while a light dawned on him.

'I begin to grasp it,' he said to Duff [his son]. 'it's the basic problem of socialism, isn't it? As defined by the Frenchman to whom the beauties of an egalitarian society were explained. Mais alors, qui videra le pot de chambre?'

'That,' said Mrs Siddal, flushing, 'is what every civilized person should do for himself. But I wish we had more bathrooms.'

'Oh I know,' said Siddal. 'I think so too. And so did Tolstoy. ... Oh, I forgot. Your generation doesn't read Tolstoy. So sorry. old fogies shouldn't harp on books which have gone out. And anyway, our guests don't seem to be civilized. They all have a capitalist mentality and leave it to Nancibel [the maid] as we did till we became proletariat ourselves. She is beautiful and she is good and she is extremely intelligent and she is worth all the rest of us put together, but she is the only person in the house to whom we can entrust this office without a social upheaval because she is a farm labourer's daughter'.

Straight to the heart of the matter - how to explore fundamental questions in a few light and witty lines.

And then there are the meditations of Sir Henry Gifford, the eminent judge, on the possible misdeeds of his hypochondriac and unloving wife. She and their children escaped the realities of bombing in London by retreating to the safety of the USA and now she wants to move again, this time to tax-free Guernsey with her husband. He is refusing, and very afraid that she has already broken currency regulations which would mean he would have to resign from the bench:

'Didn't she and the children sit pretty in Massachusetts? And now she wants to sit pretty in Guernsey and nothing to stop her except me. This war was fought by the poor and it's being paid for now by the poor ...'

Yes, indeed. A little taste for you of the joy I have experienced in discovering Margaret Kennedy and 'The Feast' . There is much, much more by way of delight.