First, a cartoon to set the mood:

Next, an image of a FB post that was circulating on 13 March this year - a reminder of the chronic failure of empathy in the character of the man who masquerades as our prime minister: 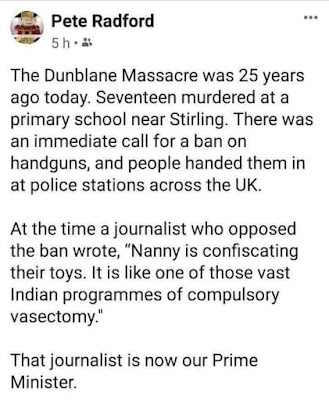 events as told in my latest work 'Dying to Know - Running through a Pandemic' (2022) is based in part on what SKWAWBOX has revealed):

The Tories' continuing inability and unwillingness to respond properly to the coronavirus pandemic has sent the UK's infection rates through the roof while the rate in comparable countries tumbles, the latest figures show.

From a point lower than that of France, Germany, US and Canada at the start of June, the UK is now seeing well over three times the number of infections per head of population of any of those nations:

The driver of this disaster appears, according to scientists, to be the Tories’ ongoing refusal to accept that the new variant is rampant in schools and among younger people who have not yet been vaccinated – but the ‘Delta’ variant is also affecting people who have been vaccinated and epidemiologist Dr Eric Feigl-Ding has accused the UK government of hiding the spread in schools for weeks, leading to 90-96% of new cases involving the new ‘Delta’ variant, with higher risk of hospitalisation for Delta as well:

A month later and I heard last night on the C4 News that the Delta mutation now accounts for over 90% of UK infections - or was it 99%?

Bye-bye, C4 - you are not serving the country well enough - too much truth-telling. The Tories are all set to privatize you.

The new variant is present worldwide now, but the UK is among the worst-affected countries because of Boris Johnson's and Matt Hancock's decisions, including a decision to cover up what was happening, leading some to redub Delta the 'Johnson variant'. Johnson's idiocy and deliberate policy choices last year have led to more than 150,000 needless deaths and rising - and he and his 'totally f***ing hopeless' minion seem determined to inflict even more horror on the UK.