'ALONE IN BERLIN', A MASTERPIECE BY HANS FALLADA - AND A WARNING TO US ALL

Back at the end of March this year, nearly three months ago, I published a blogpost that indicated Fallada's book was having quite an impact upon me. Here's a link:

In this extract below, you might pick up on the fear that was developing as I began reading through nearly 600 pages:

'Sam Munson in The National wrote that Fallada's work is 'the great novel of German resistance ... (and) deserves a place among the 20th century's best novels of political witness'. Philip Hensher in the Independent describes the book as '(Fallada's) heartbreaking tale of futile resistance in Nazi Berlin'. I am fifty pages in; there are around 600 pages in all. I am hooked. It is gut-wrenching.' 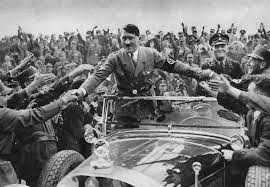 It became so horrific as I read on, I had to limit my time with the book. Emotionally, I could not stomach more than one incident in one reading session. It must have taken a good month before I finished.

Could such horror happen here in our country? Take a trip back in time to 1927 and ask any German citizen whether such things that became commonplace during the Nazi dictatorship (1933-45) would ever occur in their Weimar republic and nearly all would be shocked and deny the possibility. But economic crises turn the world upside down. Those who have power and wealth and control capital and production thrive on the chaos created by such turmoil. Patterns of behaviour can be transformed so

quickly and the worst that is in us can seep through the mask and become the new normal.

Hans Fallada understood such a horror-show. He had decided to stay in his country throughout the years of Nazi dictatorship. Already acknowledged as a very good German author before 1933, he walked a tightrope of compromise - and escaped with his life. He completed 'Alone in Berlin' in 1946. A few months later he died in hospital where he was being treated for substance abuse on 5 February 1947, before his masterwork could be published. He was 54 years old. 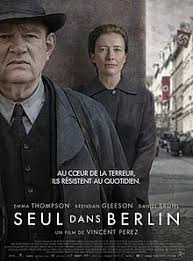 Writing to his mother just before Christmas in 1946, he described 'Alone in Berlin' as 'a truly great novel', a view he repeated in a message to his sister during that Christmas: 'You could say that, after 'Wolf', at last I've got one right'. 'Wolf Among Wolves', a story set in the days of the Weimar republic, had been published in 1938 and become an international best-seller until it was made into a Hollywood movie by Jewish producers. Fallada was put on the Nazi blacklist. Partly due to pressure to write an anti-Semitic novel, he suffered a breakdown and spent much of the war in a Nazi insane asylum, where he secretly wrote 'The Drinker'.

When I had read the last page (p.568), I started to read the Afterword by Geoff Wilkes, an Australian academic. It has an extraordinary beginning in which the tale unfolds of a duel fought in 1911 between two friends, aged 18, who could not reconcile their gay love for each other with the conventions of the times. This was to be a suicide pact in the guise of a duel. One of them was fatally wounded, the other - Rudolf Ditzen - then used his friend's revolver to shoot himself in the chest. Astonishingly, he survived - and was then charged with murder. However, before he could be tried he was found unfit to plead and committed to a private sanatorium for the mentally ill. Ditzen was released two years later and spent a number of years working mainly on farms and for farming organizations. Drug abuse became a feature of his life, linked with the drug treatments he was prescribed for his mental conditions. By 1920, Rudolf Ditzen had secured a publisher for his first novel, 'Young Goedeschal', which deals with the sexual and psychological tribulations of the eponymous male protagonist.

I did not see the next sentence coming. Wham! Rudolf Ditzen published his first novel under a pseudonym: Hans Fallada.

And so back to 'Alone in Berlin' - interestingly, I have just mistyped that as 'Alone in Britain'. If you opened the link at the beginning, you will know that my copy of Fallada's last work was a gift from my friend in London, David Siggers. He had typed a note that reads:

I hope you have not read this book. [If you have, pass it on.]

The protagonists reminded me of you and other bloggers' drip-drip of information against this government.

Thanks, David - that message could get us both arrested at some future point!

Actually, there are signs that the resistance is growing against this malevolent misgovernment. God bless, the voters of Chesham and Amersham. May the force be with you.