I had no sooner published my blogpost this morning in praise of Dawn Butler, using Skwawkbox material, when another SKWAWKBOX post arrived. On reading it, I decided to share its rich but disturbing fruits. Here, for you to digest, is the historical trail of the Labour plot to usurp the socialist challenge of Jeremy Corbyn and his supporters:

An astonishing Twitter thread by a former Labour member has distilled five years of sabotage and betrayal by the laughably-termed ‘moderate’ wing of the party to ensure that a left-wing Corbyn government was prevented despite the widespread popularity of both the former Labour leader and his policies – and their war on the whole left since they succeeded.

The Labour right preferred to sentence the whole country to hard right government – with horrific consequences for the poor and vulnerable and their children along with those killed during the pandemic – than see a left leader succeed and confirm their political bankruptcy:

Remarkable work that puts years of political and moral betrayal of party members and the UK’s people at the fingertips of anyone who needs or wants a reminder.

SKWAWKBOX needs your help. The site is provided free of charge but depends on the support of its readers to be viable. If you can afford to without hardship, please click here to arrange a one-off or modest monthly donation via PayPal or here to set up a monthly donation via GoCardless (SKWAWKBOX will contact you to confirm the GoCardless amount). Thanks for your solidarity so SKWAWKBOX can keep bringing you information the Establishment would prefer you not to know about.

If you wish to republish this post for non-commercial use, you are welcome to do so – see here for more.

To conclude this extra blogpost this morning, I will share the closing paragraphs of an article published yesterday by the Guardian journalist, Polly Toynbee, that Louise has just brought to my attention. Polly Toynbee is asking the question that all the commentariat have buzzing in their ears: 'How long before the British public realize what sort of man holds the highest office of state?':

'An insightful 1982 Eton end-of-term report about a youthful Johnson rings truer than ever: “Boris sometimes seems affronted when criticised for what amounts to a gross failure of responsibility … I think he honestly believes that it is churlish of us not to regard him as an exception, one who should be free of the network of obligation which binds everyone else.” This letter was sent to his father – no doubt they chortled over it together. 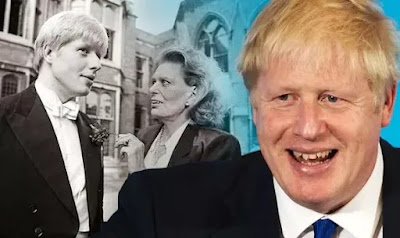 Abraham Lincoln talked a lot of sense about fooling people - and concluded that you cannot fool all the people all the time.

The only question over the summer – and in the autumn when he must eventually make some defining economic decisions – is how many voters will come round to the view of his old housemaster?'