MSM - IN THIS CASE, THE BBC - ARE HELPING OUT THE MORONIC BUFFOONS

More digests from Skwarkbox - bringing you truth and an understanding of what's going on. Much as we might wish this was not so, these are deeply political times:

This evening, as the seconds ticked down to the BBC's flagship 6pm news bulletin, the Corporation broadcast grossly false information to the public about the proportion of coronavirus sufferers who need to go into hospital.


The evidence says that 19% of those infected require hospitalisation, with 5% requiring intensive care - with around
half of that 5% dying: 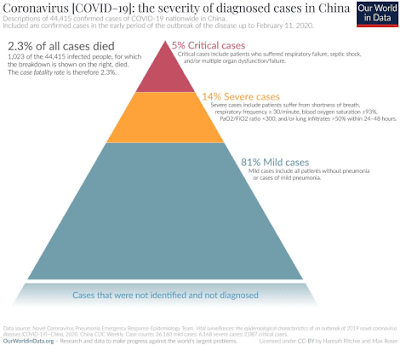 In Europe so far, the death rate among sufferers has been even higher, at 3.5-5%.


Yet the BBC told viewers that only 4% of the total infected need to go into hospital - and only a third of those needs intensive care:

The fake news was broadcast just after the BBC showed Boris Johnson claiming the UK would 'turn the tide' on the pandemic in around twelve weeks - a claim the PM then had to admit he couldn't support, saying "we don't know where we are".


The BBC's Domestic Current Affairs press office was not answering when the SKWAWKBOX attempted to contact it for comment.


And here is the evidence to support my claim that we are being misgoverned by moronic buffoons:

Boris Johnson today claimed that the UK could 'turn the tide' on the coronavirus crisis within 12 weeks if everyone in the UK follows the government's 'advice'.
"We don't know where we are"
Within minutes, he was then forced to admit that:
None of his habitual bluster could hide the fact that he'd made a claim he was completely unable to justify:

And his expression when the question was asked made it perfectly clear what he thought about being challenged.
Johnson is unfit for office - and there must be a reckoning for the lives his arrogance and nonsense will cost.

A further update on this developing story above:

At his press conference last night, Boris Johnson told the nation the UK can 'turn the tide' of the coronavirus pandemic in twelve weeks - but only if the country's people follow the government's advice.
Within minutes, he was forced to admit - live on the BBC itself - not only that he had no basis for his 12-week timescale, but that "we don't know where we are" in terms of who is infected and how fast the virus is spreading. Which is no surprise, when there is no meaningful testing even of almost certain sufferers.
Five hours later, after plenty of time to analyse Johnson's claim and subsequent admission as well as the many parts of the World Health Organisation (WHO) recommendations that the government is not carrying out, the BBC's 10pm news headlines broadcast Johnson's claim - without challenge or qualification:
Further into the programme, the BBC did briefly touch on concerns about the government's handling of the crisis - before going on to defend the government's slowness to impose the more extensive distancing measures recommended by the WHO.
However, the many who will have tuned in only for the headlines would have missed even that diluted scrutiny - and the analysis did not go into the continued failure to 'test, test, test' and trace, which the WHO says must be the 'backbone' of any effective response to the pandemic.
Tories always devolve blame, but not power - and Johnson's statements now are preparing the ground for more blame-dodging when the consequences of his inaction inevitably bite.
Boris Johnson is failing or refusing to take even some of the most fundamental steps in fighting the virus - he appears not even to be investigating the drugs successfully used by China - but he wants all the onus to be on you if the UK coronavirus crisis cuts deeper, lasts longer and costs more lives than it needs to.
And the 'impartial' BBC is helping him.
The UK's message to Boris Johnson is simple: we'll do our part, but if it's going to work, you must do yours - and you must carry the blame for your own failures.
--------------------------

Unfortunately, I fear there will be other posts such as these to follow - this is my third in as many days.
Posted by ROB DONOVAN at 09:03