HOW'S THE UK GOVERNMENT DOING IN THIS NATIONAL EMERGENCY?

An interesting question - how is the UK government doing in this fight against a deadly virus? If you have been following my blog-posts since the end of February, you will know where I stand on that question.

The opinion polls in many countries, including the UK and even more remarkably the USA, indicate that most people think their governments are doing a good job in dealing with this pandemic. I assume that's because people need to believe in their leaders in a crisis.

But today, a mainstream media (MSM) outlet - the Daily Mirror - does ask the question 'How much longer will it be before this UK government is held accountable for its inaction in the first weeks of this pandemic?':

'... it is also natural that in times of crisis voters tend to support the Government of the day if for no other reason than, unlike hamstrung opposition parties, they are
at least doing something. That does not mean a hazardous path does not lie ahead for Boris Johnson, whom we hope is making a speedy recovery. Unless I have missed it nobody in Government has yet to give a satisfactory explanation of why they were too slow to prepare for outbreak and why it has taken so long to roll out blanket testing. There are also questions as to why so many hospitals, surgeries and care homes are short of kit. Dominic Raab is facing mounting pressure over the Foreign Office's effort to repatriate Brits stranded overseas. If you want an insight into how vulnerable the Government could be have a look at Michael Gove's grimacing face last Friday when he was asked to explain why the UK has so few intensive care beds compared with other European states.'

That gives an overview of the charges that can be laid against the Johnson administration. Here's a medley of further criticisms made in Skwarkbox posts over the last few days:

'Tories wasting what tests are available by ignoring calls from front-line staff to test even asymptomatic staff and that this is more important than testing critically-ill patients
(Saturday, 28 March 2020)

The government is starting this weekend to test front-line NHS staff after weeks of desperate calls from those in the firing line of the coronavirus to do so - and is squandering its testing capacity by ignoring the advice of medics on who should be tested.
The programme will test only NHS staff who are showing symptoms of the virus or are living with people who are showing symptoms - and testing of seriously-ill patients will continue, meaning that only a fraction of the small testing capacity will be available for NHS staff.
Michael Gove said on Friday that 'hundreds' of tests would be made available for testing staff this weekend. The English NHS has around 640,000 clinical staff, according to the latest NHS England figures.
But senior medics and public health experts slammed the squandering of testing capacity even before the government started its latest misdirected and woefully under-resourced programme - saying that staff and patients with symptoms must be assumed to have the virus when there are not enough tests to go round - because the biggest risk to staff and patients is infection spread from staff who do not yet have symptoms.
The government's complete incompetence in not building up testing capacity before the catastrophe struck has meant that the UK still does not have the ability to perform even the 10,000 tests a day that Boris Johnson claimed were being done ten days ago. The NHS hopes to have that number in place by the end of March.
But even the 25,000 tests a day the government is targeting is utterly inadequate for the many hundreds of thousands of doctors, nurses and other front-line staff pouring heart and soul into the battle for the lives and health of coronavirus victims.
Those heroes need to be tested regularly to ensure their health - and to stop them inadvertently infecting those they treat.
When the testing capacity is so limited, those who are showing symptoms - patients and staff alike - must be assumed to have the disease and isolated and cared for accordingly.
To test them is to waste a limited resource when the biggest danger that is not being checked, let alone controlled, is the spread of the virus by people not yet showing symptoms.
Yet again the Tories are doing far too little, far too late - and then doing exactly the wrong thing in the hope of looking like they are doing something without putting in the effort and resources needed to tackle the actual problem.
And this reckless decision to ignore medical experts for the sake of appearances will directly cost lives.'

'Gove's face spoke volumes - but Simon Stevens' answer not only failed to answer question but highlighted even more of the Tories' damage to the NHS - (Saturday, 28 March 2020) 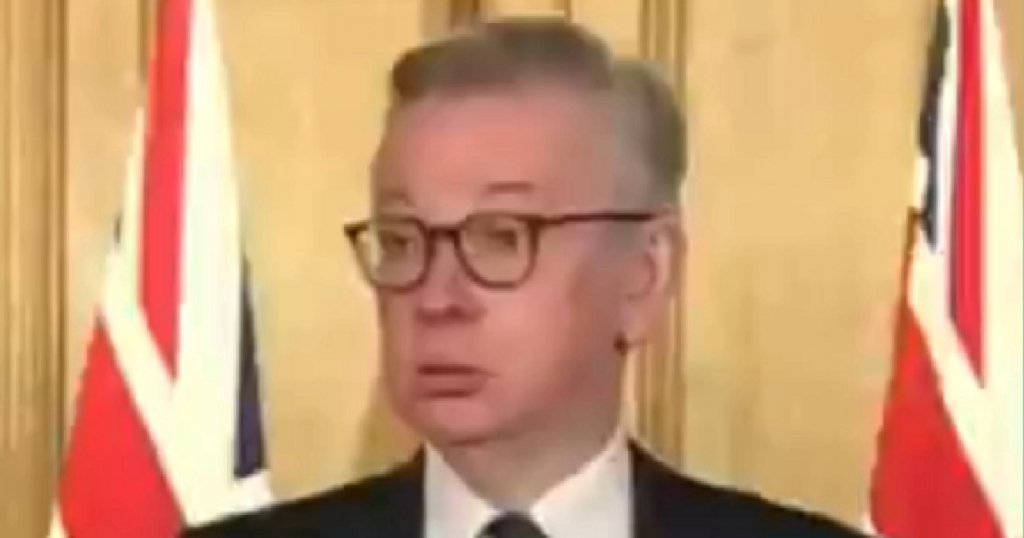 A journalist's simple question last night left Tory front-bencher Michael Gove gobsmacked - and left NHS England boss Simon Stevens floundering.
Andy Woodcock, editor of the Independent, asked Stevens whether - as NHS England chief executive since 2012 - he regretted the reductions in beds he had overseen on behalf of the Tories and his failure to increase the number of nurses in training.
Failures that have left the NHS in England with one of the lowest numbers of critical care beds in Europe - half the number in Italy - and the lowest ratio of nurses and doctors per head of population in the developed world.
The Tories have cut well over six million bed-days a year from the NHS's capacity - and more than 43,000 nurse posts are vacant.
Gove's face as Woodcock asked his question spoke volumes - but he passed the question to Stevens like a hot potato.
Stevens waffled, gibbered and danced around the question, making assertions that had nothing to do with the question asked.
But his response that he has a plan for putting more staff into the NHS over the next 5-10 years revealed just how slow and slack the Tories have been to even make a pretence of putting right the cuts they have inflicted and the shortages they have known about for years:
That Italy is swamped in its COVID-19 crisis does not excuse the Tories for slashing the NHS down to half the capacity of the Italian health service.
And Stevens' comment that the NHS can't just keep fifty additional hospitals empty in case of a pandemic was a sick joke when NHS waiting times were at their worst ever - well before the coronavirus crisis and the cancellation of all kinds of treatments, including cancer treatment, to try to give the starved NHS more room for virus victims.
The whole shambles made clearer than ever that huge numbers of deaths in the coming catastrophe will be directly linked to the Tories' media-disguised, decade-long assault on the NHS.
It was a shambolic, disgraceful performance - and a brilliant journalistic question that exposed it.' 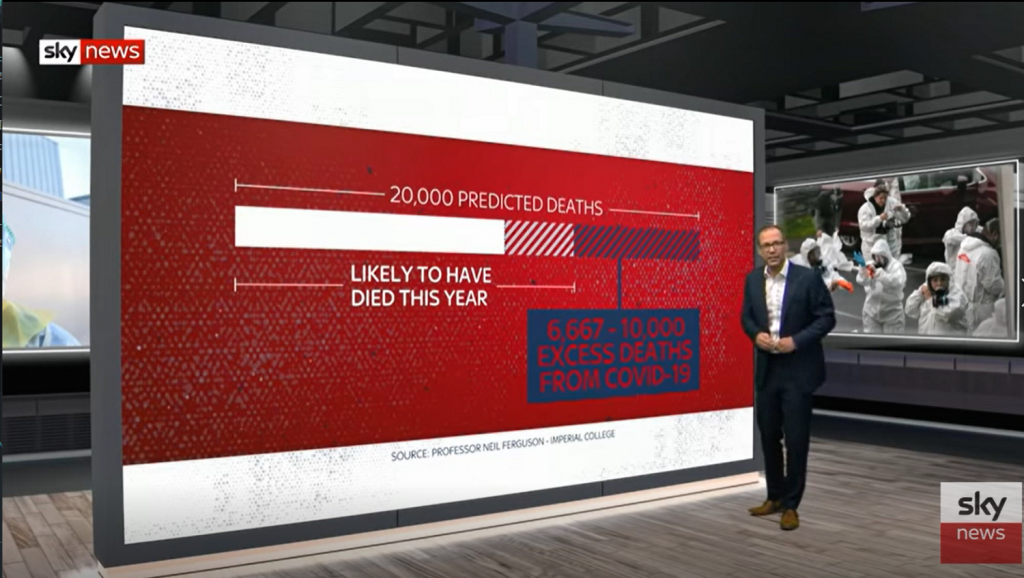 An attempt by a mainstream broadcaster to downplay the number of coronavirus deaths that the government claims would be a 'good result' has been condemned as 'psycopathic' - and as a whitewash of the fact that even the 'good result' would mean the UK allowing more than 128 times as many deaths per head of population as occurred in China.
And that's only before the brakes are taken off again in a return of the government's disgraced 'herd immunity' plan.
'Don't worry if your gran dies, she would have died soon anyway'
Another Twitter user observed, correctly, that the media's attempts to whitewash for the Tories would be a feeding frenzy if the same things were happening under a Labour government - and pointed out that the government would be writing of more than a hundred times as many of its citizens as China lost before it gained control of its epidemic: 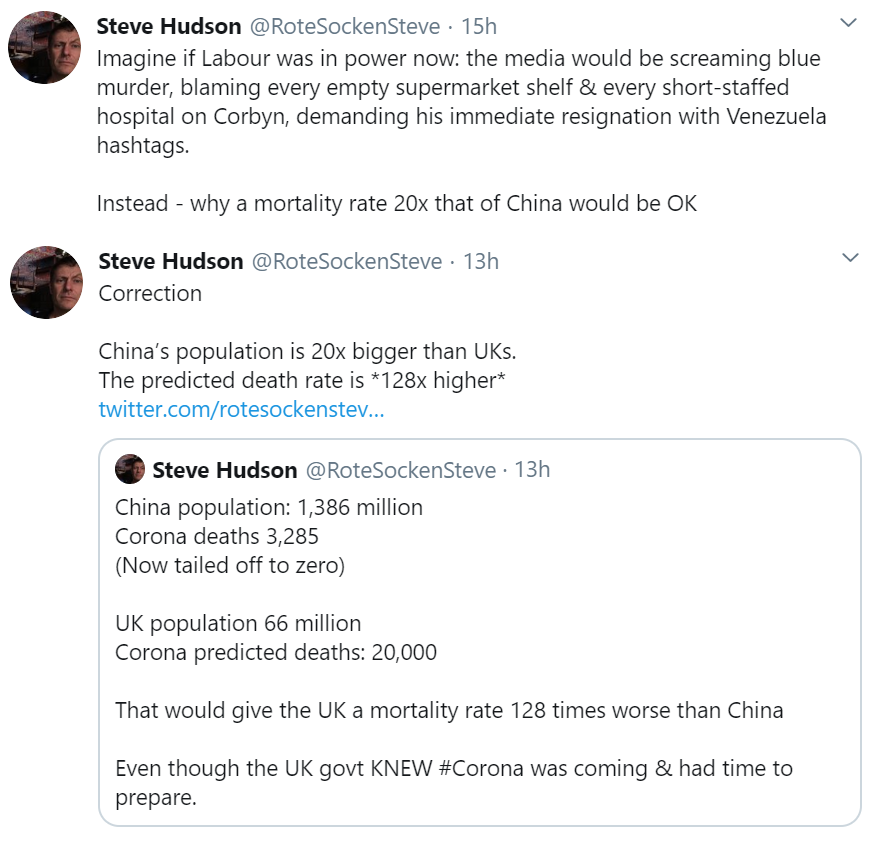 The media's - and by no means just Sky's - treatment of the Tories' abysmal handling of the UK epidemic is appalling. The people of this country must not swallow it.'

INDEED, THE PEOPLE OF THIS COUNTRY MUST NOT SWALLOW IT.