Messages of love and hope are big deals. Nearly all of us - excepting only those people whose balance of mind is disturbed - thrive on love and hope. That is why I am launching in 2020 this series of blogposts which are designed as reminders of the socialist vision that inspired the Labour Party Manifesto in the General Election, November/December 2019. In this first one, I am reflecting on the reasons for defeat. Hereafter, my focus will be on the Manifesto.


Yes - we were defeated; our vision for a better way of life for the many was rejected. But that doesn't mean that the messages of hope and decency and fairness which shaped our Labour manifesto should be rolled up into a ball and thrown away as rubbish. On the contrary, those messages need constant circulation. They represent the beating heart of the Labour Party - the Party that belongs to its half-a-million members. The Party of Clement Attlee and Aneurin Bevan, the makers of the NHS and a welfare state. The Party of Harold Wilson who declined to follow the American lead and send British troops into war in Vietnam. The Party led by Jeremy Corbyn - the Clement Attlee of the 21st century - that came so close to power in 2017 that the Establishment worked every weapon in its armoury to
ensure that when another General Election arrived, the name of Corbyn would be sullied and victory would go yet again to the 'natural rulers' of this land.

Yes - our relative share of the seats in the House of Commons is now the smallest since 1935.
Labour holds 203 of the 650 seats having lost in 60 constituencies where there had been a Labour M.P. The Tories hold 365 seats, having made a net gain of 48 seats and polled 43.6% of votes cast. The Labour Party vote share was down to 32.2%. Nearly 14 million UK citizens voted Tory. Just over 10 and a quarter million of us voted Labour. Whichever way you pitch it, the result was a crushing defeat for the Labour Party. But there are still reasons to be cheerful - that Labour Party Manifesto was not the reason for our defeat. 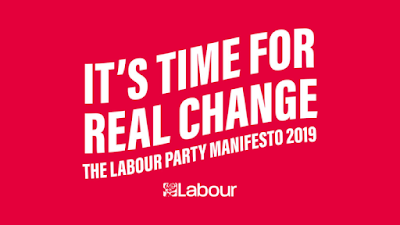 
No definitive explanation for this startling expression of disdain for the ballot box has been offered in academia to my knowledge; nor the reasons for the gentle recovery that has not yet seen a return to the 70-79% range. It does, though, seem to have been the case that rather suddenly towards the end of the 20th century around 5 million of the electorate no longer felt it worth their time casting a vote to determine which politicians in which party should govern their country. 'They're all the same; it doesn't matter which party gets in'. Is that door-step response that I and others have met the main explanation? And if so, how has that irrational meme established itself? Ever since Margaret Thatcher's victory in 1979, the differences have been manifest. Neoliberal Toryism is nasty and brutish - and has been long-lived; Tony Blair may have been, in Thatcher's words: 'My greatest achievement!', but even New Labour in its domestic policies was different from the neoliberalism of the Tories; and now Jeremy Corbyn's Labour Party has made the differences crystal-clear to those with seeing eyes.

I remain puzzled. But clearly there are problems for the Labour Party when its central message is 'We are for the Many, not the Few'. Around one-third of the Many feel so detached from the idea of politics, so contemptuous of its meaning for them, that they shun the ballot-box. In the 2019 General Election, for the first time, more people voted Tory than Labour in the semi-skilled, unskilled and unemployed categories of people.

To me, the main reason for the electoral defeat has to be the fact that this was an election called and planned for in the context of Brexit.


Key factor (1): David Cameron and his buddies and their policies and actions are the causal root of Boris Johnson's return as PM. Cameron and Co. created Austerity Britain with all its suffering between 2010 and 2015 - and continuing to this day. There was no effective opposition or alternative offered by New Labour. Swathes of the population became further alienated from the political state. In 2015, the junior Party in the coalition, the Lib-Dems, bore the brunt of public backlash allowing Cameron to return to Downing Street with a Tory majority. Over the border in Scotland, the Labour Party lost 40 of the 41 seats they were defending, wiped out by the Scottish Nationalists who explicitly rejected Austerity as an instrument of government. Those who suffer will seek recompense if given the opportunity.


Key factor (2):   David Cameron in his arrogance believed that he could not err in his political judgement. He had a problem with the right-wing Europhobes in his own Tory Party and Nigel Farage's UKIP looked like an electoral threat. He had offered the hope of a referendum in the 2015 Tory election manifesto; this was a promise he would honour in order to secure a people's majority for Remain and seriously damage his Europhobe critics. The subsequent Referendum on whether to remain in Europe or leave backfired horribly for him - and has plunged this nation into so much distress. By a slim but still politically significant majority the Leave side won. Brexit became reality. Cameron had promised the people that their vote would be decisive; millions who had been neglected and abused by government were now targeted by the likes of Cummings and Farage and given the chance for revenge on a Westminster political establishment. They were told: 'Take back control'. Europe was the enemy presented to them - but the real enemy to be exploited was a national political system dominated by two Parties in parliament who cared little or nothing about their real lives.

Key factor (3):    Theresa May spent over two years putting the unity of her Party before the interests of the nation and failed to get Brexit done. She created the open-goal that the ruthlessly ambitious and morally bankrupt Boris Johnson, an Etonian and Oxford Bullingdon Club contemporary of Cameron, was only too willing to exploit. Johnson, on securing his childhood dream of being prime-minister - selected as the man with a popular touch and therefore most able to withstand the challenge of Jeremy Corbyn  - very quickly crushed all dissident voices in the Tory Party, imposed unity by expulsion, and called the 2019 General Election to get Brexit done. Ah! I and others were so blind. We really didn't read the runes. 60 Labour MPs lost their seats and 52 of those seats were in Leave-supporting areas, largely across swathes of the North, the Midlands and North Wales - traditional Labour heartlands. Of the other eight seats - Remain constituencies - six were in Scotland where the Scottish Nationalist Party again dominated. Getting Brexit done was always going to trump the appeal of a socialist vision for the future of this country. First things first. Here at last was the hope that our Brexit voice would be taken seriously - we can trust Boris to get it done. He's a real man.


Key factor (4):    Jeremy Corbyn was targeted by the Establishment the moment he became the leader of the Labour Party in 2015. Those directly in the business of exploiting the capitalist market to the maximum for their own ends saw him as Public Enemy No.1. The ranks of the Tory Party representing those business interests did so too. The media, owned largely by oligarchs from abroad, followed suit - and its journalists and pundits seemed to resent the success of Corbyn, an outsider from a written-off past who did things differently. Those who claimed to speak for British Jews attacked him and the Labour Party for anti-Semitism - history will have its say on that trumped-up charge. Large sections of the parliamentary Labour Party - its MPs - were never reconciled to losing the fight to push Corbyn and his socialist vision aside in order to return to the 'moderation'  of New Labour. All this negativity had its impact. Many on the doorstep who were determined to have their Brexit voice recognised justified their feelings by claiming that Jeremy Corbyn was a weak and bad leader: 'We would vote Labour if it were not for Corbyn'.


Hubris awaits for Johnson. We are the Resistance. Press above for a video explaining more about the struggle to come.

My thanks to Elliott Chappell for his online analysis of those 60 lost seats and Louise Donovan for a couple of telling descriptors that I've used in this blogpost (more on that in future blogposts on her website).