RESISTING THE TORIES - OUR MANIFESTO FOR THE FUTURE - PART ONE: THE CLIMATE EMERGENCY

I promised a re-presentation of the Labour Party manifesto that was published during the General Election in 2019, at the end of last year. The policies and concerns that fill that document are still fundamental to my hopes - and those of millions of others - for a better, kinder, fairer future. Within the parliamentary Labour Party, there are those who are insisting they have been right all along; there never was a chance that these socialist pipedreams would lead to election victory. The manifesto was 'overloaded';  it promised so much as to be unbelievable. I do not share this view. However, I do think we needed a scaled-down, mini-version to help get these vital ideas and policies across to people.

The manifesto was titled:

FOR THE MANY NOT THE FEW

Such messages will stand the test of time - and we need them all the more as the consequences of global warming become evident.

The Foreword carries Jeremy Corbyn's name but it could have been written by anyone who cares about the plight of this country and all the other nations where the quality of life for so many has been adversely affected by neoliberal economic policies that put the pursuit of profit before the welfare of the citizen.

"The last decade has seen a wealth grab by a privileged few, supported by the Conservatives, at the expense of the majority. The big polluters, financial speculators and corporate tax-dodgers have had a free ride for too long ….

" I am not prepared to continue to see more families without a proper home and more people queuing at food banks or sleeping rough on the streets.

I am not prepared to put up with communities blighted by lack of investment, endless cuts to
vital services and millions struggling to make ends meet, while tax cuts are handed to the richest.

We can do better than this. How can it be right that in the fifth richest country in the world, people's living standards are going backwards and life expectancy is stalling?"

William Keegan, the senior economics commentator for The Observer, makes the point that back in the bad old days of 1974 when the unions were getting above themselves and Edward Heath and the Tories took on the coal miners and declared the three-day week to conserve electricity supplies, the average growth of productivity in the UK was 2-2.5%. Since the financial crash of 2008 and under successive Conservative governments (including the Coalition) since 2010, that figure for average growth of productivity has been 0.3%. (The Observer, p.57, December 29, 2019) Keegan goes on: '... since 2010, the cuts to public services (other than the NHS) have amounted to 21%. No wonder we see social chaos all around us'.

And yet still the Tories were re-elected! With a much increased majority! When will we ever learn?


We need to learn quickly - and act fast. We face a climate change emergency on our planet, Earth. I bet those Australians who are seeing their homes destroyed by bush fires never realised the threat would hit them this hard, this fast. We all face the certainty that if we live long enough we too will be waking up to climate change emergencies in the near future that will radically change the course of our lives. Our children and our grandchildren face this inevitable future.

And yet - when the media staged a climate change election debate, PM Johnson was notable by his absence. The Tories are not going to be the turkeys voting for Christmas; their economics are centred on short-term profit making; they are not interested in the sanity of longer-term calculations that address our very survival as a species.

"The climate crisis ties us all into a common fate. This election is our best hope to protect future generations from an uninhabitable planet. The Intergovernmental Panel on Climate change has said we need to cut global emissions in half by 2030 to have a chance of keeping global heating within safe limits - that means acting now, and acting decisively.

The Tories wasted a decade by serving the interests of big polluters. Labour will use the crucial next decade to act. The Tories slashed support for renewable energy while pushing through dangerous fracking …..

That's why Labour will kick-start a Green Industrial Revolution that will create one million new jobs in the UK ….. We will show the world how prioritising sustainability will not only deliver immediate improvements to everyone's lives but also offer humanity a pathway to a more equitable and enlightened economy: one that protects our environment, reins in corporate power, revitalises democracy, unites our communities, build international solidarity and promises a better quality of life for all. The scale of the challenge requires nothing less."

Cometh the hour, cometh the woman. The key thinker behind these first twenty or so pages in the manifesto devoted to the climate emergency is Rebecca Long Bailey, who yesterday announced her candidature in the election of the new leader of the Labour Party.

"Labour will create a Sustainable Investment Board …. We will ask the Office for Budget Responsibility to incorporate climate and environmental impacts into its forecasts so that the cost of not acting will be factored into every fiscal decision …..

We will create a National Investment Bank, backed up by a network of Regional Development Banks, to provide £250 billion of lending for enterprise, infrastructure and innovation over 10 years …..

Just 100 companies globally are responsible for the majority of carbon emissions …. We will change the criteria a company must meet to be listed on the London Stock Exchange so that any company that fails to contribute to tackling the climate and environmental emergency is delisted." 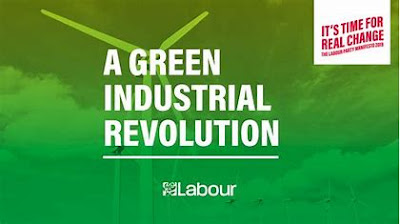 And how will all these policies be financed? John McDonnell, the shadow Chancellor of the Exchequer, issued a booklet detailing the mechanisms for funding to accompany the manifesto. 'Funding Real Change' makes a convincing case that, in the UK and other similar advanced economies, governments will be able to borrow and invest more while at the same time being fiscally sustainable. Investment spending, using money borrowed at low rates of interest, raises the productive capacity of the economy. People earn more and pay more in taxes proportionately. Demand is boosted; a virtuous circle is created. Borrowing for investment is necessary for a healthy public sector and a healthy economy as a whole.

Other key features of this Green Industrial Revolution are outlined below:


Labour will ensure that investment is spread equally across the country - and give powers and funding to every region and nation of the UK.
Labour will deliver nearly 90% of electricity and 50% of heat from renewable and low-carbon sources by 2030. We will build new offshore and onshore wind turbines; solar panels; nuclear power stations; and tidal energy stations. We will support new technologies to help decarbonisation and ensure all homes are energy efficient. We will protect the livelihoods of high-carbon energy workers in this transition period and we will introduce a windfall tax on oil companies so that those who have damaged our climate will help cover the costs.

Labour will put people and planet before profit by bringing our energy and water systems into democratic public ownership. Under Labour, our green future will be owned by all of us.
Targeted science, research and innovation will be crucial to tackling the climate crisis, dealing with the plastic waste filling our oceans and addressing other societal challenges such as an ageing population and antibiotic resistance …. We will set a target of 3% of GDP to be spent on research and development by 2030.
Our Green Industrial Revolution will create at least one million well-paid, unionised jobs in the UK. We will make sure that people are properly trained in the skills they need to access these jobs of the future. Properly-run apprentice schemes will be vital.
Labour will build a sustainable, affordable, accessible and integrated transport system, founded on the principle that transport is an essential public service. Bus networks and rail services will be taken into public ownership. We will help people to become less reliant on their cars.

A Labour's government's Green Industrial Revolution is complemented by our Plan for Nature. Our commitments to ecosystem repair and environmental protections work hand in hand with sustainable jobs and industries, and social justice.

We will introduce an animal welfare commissioner; we reiterate our commitments to prohibit foxhunting and end the cull of badgers.