Below is the story which links Jago, a Daventry comprehensive, an English family of emigrants - and Australia. Hopefully, by airing the story in this way more details may emerge. It's also an opportunity to show off a number of Jago's paintings of 'Banbury Cross'.

As an intro, here's some Banbury Cross info you may never have read before:

The principal events in the development of puritanism in Banbury include a dispute over the erection of a maypole in the town in 1589, the deposition and attempted reinstatement of the vicar, Thomas Bracebridge, in 1590, and the destruction of the Bread Cross and High Cross as objects of superstitious veneration in 1600.

Banbury remained without a cross for more than 250 years until the current Banbury Cross was erected in 1859 at the centre of the town to commemorate the marriage of Victoria, Princess Royal (eldest child of Queen Victoria) to Prince Frederick of Prussia. The current Banbury Cross is a stone, spire-shaped monument decorated in Gothic form.


“Ride a cock horse to Banbury Cross” is a traditional English nursery rhyme dating back to 1784, when it was published in The Nursery Parnassus.
It is needed to be said that in the 18th century version, instead of the modern “fine lady” an “old woman” is depicted.
The term “cock horse” may simply mean a high spirited horse. Banbury is a town in Oxfordshire, and it had many crosses until they were destroyed in 1600 by the Puritans. The identity of the fine lady is unknown.

Ride a cock-horse to Banbury Cross,
To see a fine lady upon a white horse;
Rings on her fingers and bells on her toes,
And she shall have music wherever she goes.

And so back to the story that inspired this blog-post.

Chapter Four of 'The Remarkable Life of Jago Stone' - my biography of Jago which will be published soon - (press this link here for more details) - is called 'The Skinny Latte Blog'. This is how the chapter begins:

'This biography is following a singular path. I am asking my readers to
follow me in a real-time journey of discovery to find the artist Jago
Stone. What follows is very largely the draft I wrote in the spring of 2016.
It was not until 2011 that I experienced the excitement of googling
Jago Stone. The first time I typed the artist’s name in the search engine, I
hit the jackpot but it took a minute or two for the penny to drop. I had
been directed to a London lifestyle blog called Skinny Latte, produced
by Victoria, a twenty-something vegetarian trying to make better sense
of a London working environment. And I was reading an item posted in
October 2010 titled ‘Jackie’s – A Flea Market Stall in Hampstead’. What
could be the connection with Jago?
The first online response to Victoria’s post was from Jen, someone it

seemed Victoria already knew, loving the pictures on the blog. Then Jen
added that she had noticed a watercolour painting in the first picture and
that it had reminded her of some of the paintings her husband had bought
decades ago when he was stationed at Upper Heyford, from a local artist
named Jago Stone.
Now we have a connection – but the watercolour painting on the
pavement outside the second-hand bookshop in Hampstead does not
suggest to me Jago’s style. No matter. Jago is online.'

Indeed - Jago was online and soon family members as well as American veterans from RAF Upper Heyford and RAF Croughton were making their contributions to this blog begun by Victoria that had now become a vehicle for those in search of Jago Stone. Over the next four years or so, quite a few enquiries and comments were posted, all centred on Jago - that remarkable artist. This is the paragraph from my biography that makes the connections that are relevant to this blog-post:


'... And then in August 2011, Loz replies to this son of Jago: ‘My
mother was friends with your dad when we lived in Chipping Warden.’
She explains that when she and her mother were reducing their luggage
before emigration to Australia, a picture by Jago of Banbury Cross had
been donated to Southbrook comprehensive school in Daventry. She
wonders if it is still there.'

A child, now grown-up, remembers their parents’ friend. She was not the only one. Others have come online to relive their memories and display their attachment. Jago made an impression.

I was so busy juggling the research strands to weave them together to create the biography that I never made the phone-call to the Daventry school to find for myself whether the picture was still there. Until today. More on that later. But first the story of what happened to reawaken my interest in this particular painting of Banbury Cross.

On 11 October, this month, I got a notification of a message from Lozzie on my Jago Stone Facebook Page - here is what I read:
I remember him visiting our house in Chipping Warden, he was just a charismatic character. He would’ve made a brilliant actor because he had presence. He painted a watercolor of Banbury Cross for my mother. I donated it to Daventry Comprehensive before we emigrated to Australia. Such a remarkable man and what a great name.
And here is my reply:

I recognised the name and the story when I read this message - thank you so much for making contact. You've actually got five lines in my biography of Jago to be published on December 1 this year - based on your post on the Skinny Latte blog in August 2011. I would love to hear more memories - my webmail address is robdonovan@waitrose.com, if it helps. This is the first communication from Australia about Jago - how cool is that!

Lozzie responded with excitement and wows.

That exchange between me and Lozzie in Australia felt extraordinary. Eight years after she had posted on the Skinny Latte blog, Lozzie comments again - and discovers her first post had been read by the biographer of Jago and incorporated into the book. And I find that the Australian connection is still very much an active one. 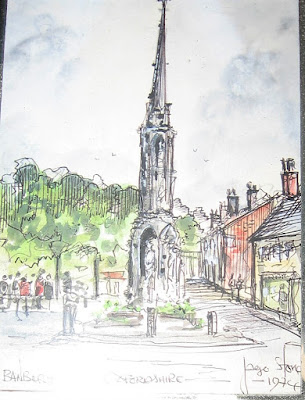 I think all this makes a story well worth sharing - and provides a fine opportunity to display the images of Banbury Cross painted by Jago that have come my way. I hope you have enjoyed this post - and if you can add any more detail to the story that would be great. I made my phone-call to the receptionist at DSLV E-ACT Academy this morning and she is on the case and only too happy to let me know what she discovers. For those unfamiliar with developments in the English educational system in the last decade in particular, let me translate since the expression 'comprehensive school' has become rather unfashionable. D stands for Daventry; S stands for Southbrook; L stands for Learning; V stands for Village; E-ACT is an expression I think signifying being up-to-speed with developments in cyberspace (please correct if I'm wrong) - and Academy status is best left to scholars writing doctorates on the link between politicians and schooling to explain.

I do hope that there is a Part Two to this story. Jago would love the idea of an Australian connection.