I am a writer. I have a voice. I used to be a poet and had a voice, albeit a very young one. Recently, I seem to have recovered that poet's voice but more of that another time. Here in this blogpost I want to celebrate being a 17 year old poet who was also in the Lower Sixth, the first year of my two-year sixth-form education at Dartford Grammar School (DGS), Kent, studying English, History, Geography and Art at A-level - and being prepared for the Oxford entrance examination which I would sit at the end of the autumn term, 1966; my first term in the Upper Sixth.

My journey back in time takes me into the pages of The Dartfordian (1966), the annual school magazine, where I am able to reacquaint myself with the child-self struggling to find a way into more maturity through a sea of testosterone. Writing poetry helped - two of my poems printed in the magazine are reproduced in this blog. My art work provided meaning too. One 'urban' watercolour of mine that found its way into The Dartfordian (1967) will be here in the second part of this posting in a week or two for you to see. Actually, my collector's and archivist's instincts have seen my sixth-form artwork travel safely though a half-century and more of movement so I am able to illustrate this poetry post with some of that work.


But this blog is not just about me; I want to celebrate others and give you, now, a sense of what it was like to be alive in that privileged grammar-school culture as the decade of the Sixties shifted the 'structure of feeling' in society (Raymond William's telling expression) in a new and radically different direction.

For starters, a poem: 'Under an Ancient Tree', and other fragments: 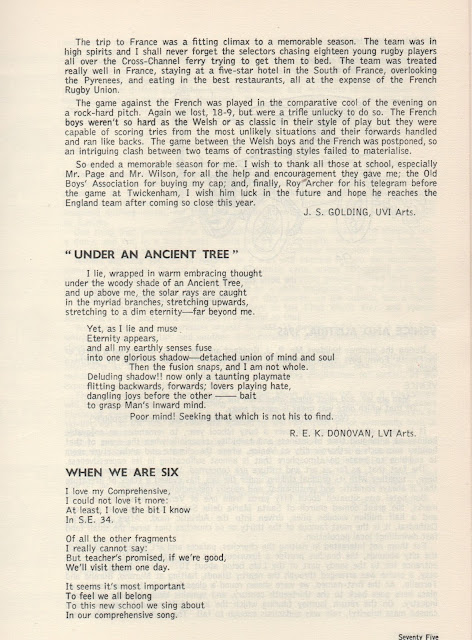 The poem can speak for itself. I can still remember where I lay, under that tree, inside the school grounds one hot summer's afternoon in a free period - and how I felt, inside my head, creating the template memory for a lifetime. But also of interest to me now is the other content on

p.75: the end section of a piece called 'Playing for England' by J.S.Golding, UVI Arts and the opening of a poem by 'Ferret' called 'When We Are Six'. They provide glimpses into the culture that helped shape me.

My class was my bubble. John Golding belonged to the Gods in the year above, occupying a very exalted position in the Pantheon as a DGS star-sportsman. I don't think I was unusual in having little or no contact with the years above or below me throughout my schooling; indeed, as soon as the year became streamed aged 14/15, I had little or no contact with the kids in the classes (4R and 4E) below mine (4A); nor did I socialise with those who had followed the Science route in 4S and 4C. If I'm right about the 'bubble' experience being the norm, I wonder how true that still is today - and what the consequences are in the educational journey.


'Ferret', if I remember correctly, was the nom de plume of Mr J. Mackereth, the long-standing editor of the school magazine - and this poem his gentle protest at the horror of the Comprehensive monster that lurked in the corridors of the Government at Westminster and Whitehall and Kent County Council at Maidstone. These were insecure and troubled times.

The next image from The Dartfordian is of pp.48-9 and affords an opportunity to see the rugby God in person - I think the photographer has captured John Golding's justifiable satisfaction with his achievement brilliantly - and also to read the first half of an article by D.J. Harris, VA on the school trip to the Lake District during the summer holiday in 1966. Dave Harris was the year below me and I have no clear recollection of the boy. But that Lake District walking holiday - OMG! I remember that so well. I, too, was one of that party of thirteen boys, together with my friend and fellow Oxford aspirant, Bruce Berrecloth. We were being prepared for the Oxford entrance exam by the man who had organised this Lake District trip - none other than our History master, Mr. David Patterson himself, our guide to all things intellectual and Oxfordian, and the man who had created the reading list which was our magic wardrobe into a new land far beyond our family homes. I should add that after a year of studying Wordsworth to be transported from Dartford to see mountains for the first time in my life and then reach the top of Helvellyn, having crossed Striding Edge - that truly qualifies as a numinous experience. 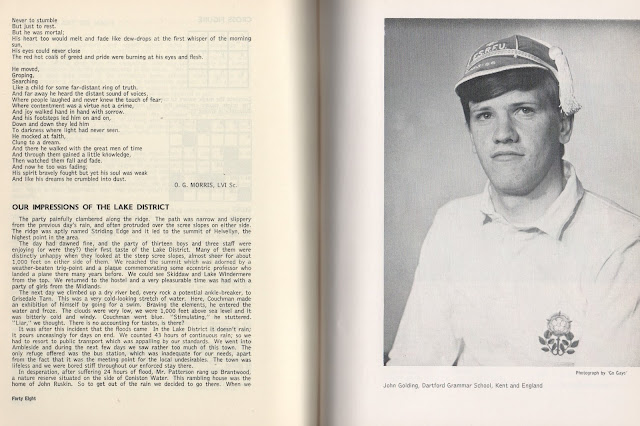 The image below takes you to my poem 'And Yet'. Again, let it speak for itself. 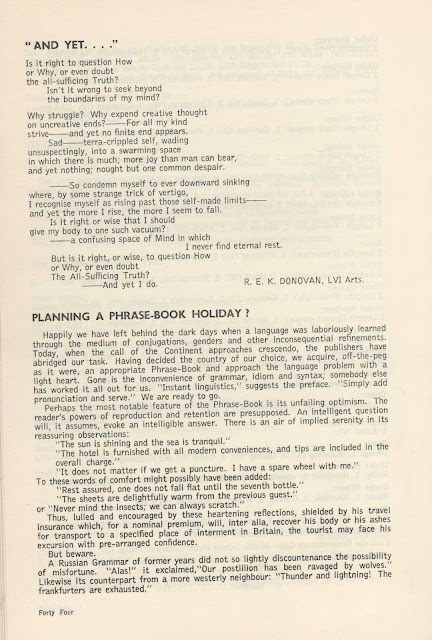 But the piece below the poem - exploring the perils of the phrase-book for the linguistically challenged Englishman abroad by Mr. John Manning, whom I don't remember - has a significance because it stands as a base-line indicator for the wondrous change that has transformed Dartford Grammar in half-a-century into an international school of excellence where every student studies two languages at GCSE, one Asian (either Mandarin Chinese or Japanese) and one European (either French, German, Latin or Spanish). DGS is the only school nationally to offer this curriculum. Press this link here to discover more about the school my old school has become.


The penultimate image from The Dartfordian is of p.69 where you will see the ending of a piece by Bruce Berrecoth titled 'What Price Schoolwork'. It nicely references the 'passionate tumult of life' that was certainly hurling Bruce and me up and down. Do the sixth formers of today feel the life force quite in the same way? 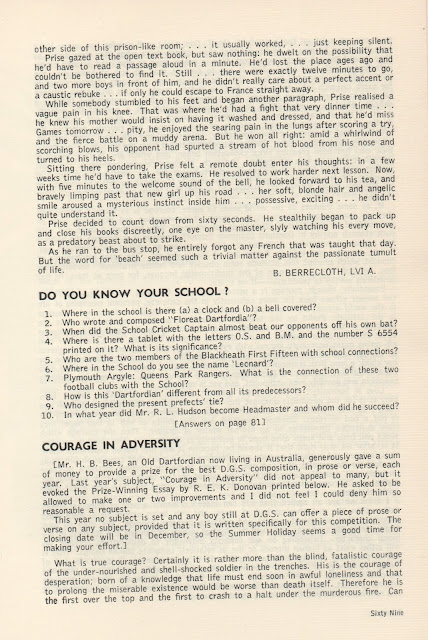 You may also note that I won the 1966 Bees Essay Prize that was worth a cool £5. Tucked inside one of the books I bought with that princely fiver, still sits today the record of exactly how the money was spent. I discovered it this morning. I still have most of those books today. One line from that Bees essay of mine will suffice to suggest the truth of the judgement of another teacher of influence on my development at the school, Lee Hutchinson, who claimed I was a 'rebel to the rebels; a member of the Establishment to the Establishment':

'The examples of great men are always illuminating and it is as well to bear this in mind in these days of cynicism, pessimism and despair, which, in excess, will sound a death-knell for any human spirit.'

Cynicism was very much my business, although I couldn't fully acknowledge my vice without upsetting those I needed to keep sweet. 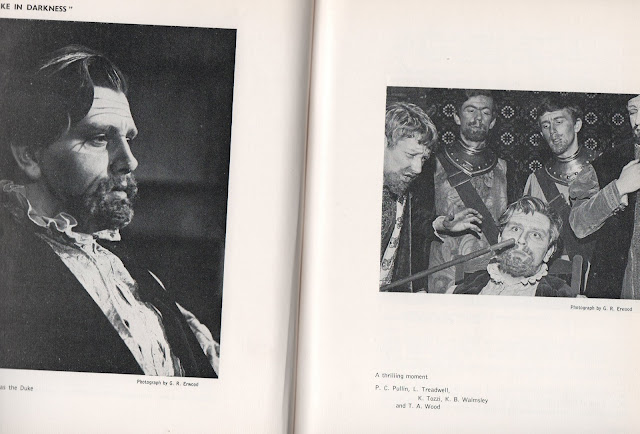 These final images show Terry Wood (1948-1982) and other actors in the 1966 school play: 'The Duke in Darkness'. Terry, like John Golding, graced the UVI Arts.  He was our great schoolboy actor and starred as the Duke of Laterraine. I was one of the three musketeers who performed a minor role in a 'very effective tableau, very well executed' at the conclusion of the play when we help rescue the Duke. I was on chatting terms with Terry, despite the age difference.

Terry's death warranted an obituary in the Times (Thursday 24 June, 1982). 'Noted stage actor' provided the headline. Reading what followed left me open-mouthed in that summer of '82 when I was teaching in my inner-city, social-priority, multi-ethnic comprehensive in the London borough of Brent. Mortality had reared its head; the news of the death of a contemporary is particularly shocking when young:

'With his death, the [Royal Shakespeare] Company has lost a progressively admired actor, and one who was unmistakeable in any cast. Weighing 20 stone, and standing 6ft 5 ins, he was a gentle giant, popular in the company with whom he had played during the last three years at both Stratford upon Avon, and London.'

I last met Terry in 1972 in my first year of teaching at my secondary modern school in Slough. The timetable had been collapsed for the afternoon during that summer term to gift the upper school a chance to be enthralled by a group of visiting actors. I had been delegated to help supervise - and suddenly I realised I was watching Terry Wood. He was brilliant; they all were. That evening, we shared a drink or two together at the pub in Old Windsor as he loudly regaled me and all the strangers in the bar with tales of the outrageous Kenneth Williams and other matters. He must have found me strangely innocent and provincial.

Times change. The school song we knew then had the title which I've used to head this blogpost: 'Floreat Dartfordia'. It was written and composed by Mr. 'Jacko' Steane, my old Latin master. The last verse reads as follows (just to explain, first, Wilson, Havelock, Vaughan and D'Aeth were the four School Houses; I was a Wilson boy):

"Then all who here together stand
The grateful anthem raise,
And pledge to School and Motherland
Our labour, love and praise;
And Wilson, Havelock, Vaughan and D'Aeth,
Though time and chance may sever,
Shall hold in memory and faith
Their brotherhood for ever.
Floreat in Saecula,
Floreat Dartfordia."

The private 'public schools' (with their special ethos) were there for the 7% of the population of school-aged children whose parents could afford the fees to send them. The state public grammar schools such as DGS catered for the 20-25% of our country's children who passed the 11 plus examination. Their values - as you may have gathered - were modelled on much the same lines as those posh private establishments. As Robert Lowe observed before and after the passing of the Second Reform Act in 1867 which further extended the franchise:

'We must educate our masters.'

No doubt it helped if grammar schools too promoted the values of the elite - but then came the Sixties and some of the sheep painted themselves black. After all, every estate has its problem-kids. I knew something wasn't quite right but couldn't yet put my finger on it. I was facing both ways, as Lee Hutchinson had pointed out. When I entered the Bees Essay Prize competition again as an Upper Sixth Form boy, my winning poem was called 'A Member of the System' and duly published in The Dartfordian, 1967. I will republish it in the forthcoming Part Two to this blog-post.