Bob Woodward is very good at capturing the instinctive Trump style and explaining why he was the winner in the presidential campaign of 2016. Here are some extracts from an early part (p.16) of 'Fear':

'Politicians like Hillary (Clinton) can't talk naturally, (Steve) Bannon said … not from the heart or from deep conviction - not angry. Trump said okay, you become the Chief Executive Officer of the campaign ...

They agreed that Kellyanne Conway - a feisty, outspoken Republican pollster who was already helping the campaign - would be designated campaign manager. (Bannon continued) "We're going to put her on television every day as the female-friendly face on the thing … people like her. And that's what we need is likeability … I'll never be on TV."

Conway had never run a campaign either. That made three of them - the shiny neophyte candidate, the campaign CEO and the campaign manager'.

Woodward was shaping my understanding as I read his words. Trump, Bannon, and Conway - trading as political virgins: a new passport to popular success. And Conway knew her man, her boss - Donald Trump. An unreconstructed septuagenarian. Here is Woodward recording the moment of her appointment:

"Do you think you can run this thing? he asked.
"What is 'this thing'? she asked. "I'm running this photo shoot."
"The campaign," Trump said. "The whole thing. Are you willing to not see your kids for a few

months?"
She accepted on the spot. "Sir, I can do that for you. You can win this race. I do not consider myself your peer. I will never address you by your first name."

Woodward seldom makes judgements. I will. What a sad way to preside. What a dismal way for humans to relate.


And now, Woodward exposing the limits to the understanding of a man such as president Trump. This from pp.56-7:

'Next Cohn (Gary Cohn, the president of Goldman Sachs, the leading investment banking firm) repeated what everyone was saying: Interest rates were going to go up over the foreseeable future.

I agree, Trump said. "We should just go borrow a lot of money right now, hold it, and then sell it and make money."

Cohn was astounded at Trump's lack of basic understanding. He tried to explain. If you as the federal government borrow money through issuing bonds, you are increasing the U.S. deficit.

What do you mean? Trump asked. Just run the presses - print money.

You don't get to do it that way, Cohn said. We have huge deficits and they matter. The government doesn't keep a balance sheet like that ….'

Here's a further online explanation of the point:

An ongoing trade deficit is detrimental to the nation’s economy because it is financed with debt. The United States can buy more than it makes because it borrows from its trading partners. It's like a party where the pizza place is willing to keep sending you pizzas and putting it on your tab. This can only continue as long as the pizzeria trusts you to repay the loan. One day, the lending countries could decide to ask America to repay the debt. On that day, the party is over.

A second concern about the trade deficit is the statement it makes about the competitiveness of the U.S. economy itself. By purchasing goods overseas for a long enough period, U.S. companies lose the expertise and even the factories to make those products. Just try finding a pair of shoes made in America. As the United States loses competitiveness, it outsources more jobs and its standard of living declines.


'Fear' shows how the Mueller investigation impacted on the presidency. When he learned that Robert Mueller had been appointed as special counsel to look into Russian election meddling and any connection to the presidential campaign, Trump went ballistic. Here is Woodward's account (pp.165-66):

"He was just in here and I didn't hire him (Mueller) for the FBI," Trump raged. "Of course he's got an axe to grind with me."


"Everybody's trying to get me," the president said. "It's unfair. Now everybody's saying I'm going to be impeached … They're going to spend years digging through my whole life and finances."

Trump could not focus on much of anything else. Meetings were canceled and parts of the day eventually scrapped.

Porter (Rob Porter, Trump's staff secretary) had never seen Trump so visibly disturbed. He knew Trump was a narcissist who saw everything in terms of its impact on him. But the hours of raging reminded Porter of what he had read about Nixon's final days in office - praying, pounding the carpet, talking to the pictures of past presidents on the walls. Trump's behavior was now in the paranoid territory.

…. "I'm getting punched," Trump said. "I have to punch back. In order for it to be a fair fight, I have to be fighting."

Back and forth most of the day, the president rotated to watch TV in the dining room and then come out to the Oval office in a frenzy …. "I am the president," Trump said. "I can fire anybody that I want. They can't be investigating me for firing Comey (formerly director of the FBI). And Comey deserved to be fired! Everybody hated him. He was awful."


If you haven't read Part One of this blog-post yet, I do ask that you follow the link here. You will learn more about the condition that defines president Trump and is so well illustrated above. Narcissistic Personality Disorder.

To conclude, here are extracts from the last two pages of 'Fear' (pp. 356-57). They relate the story of John Dowd's resignation from the Trump team in the White House. Dowd was aged 76 and had a distinguished record as one of the most experienced attorneys in white-collar criminal defence when he was offered a job by president Trump in May 2017. He jumped at the chance to round off a 47-year legal career with the highest-profile case in the country, representing the president as Trump faced the Mueller Inquiry. Just short of a year later, Dowd decided enough was enough.

Here is Woodward closing the story in his book:

'Dowd knew the game, knew prosecutors. They built cases. with all the testimony and documents, Mueller could string together something that would look bad. Maybe they had something new and damning as he now more than half-suspected …

Some things were clear and many were not in such a complex, tangled investigation. There was no perfect X-ray, no tapes, no engineer's drawing. Dowd believed that the president had not colluded with Russia or obstructed justice.

But in the man and his presidency Dowd had seen the tragic flaw. In the political back-and-forth, the evasions, the denials, the tweeting, the obscuring, crying "Fake News", the indignation, Trump had one overriding problem that Dowd knew but could not bring himself to say to the president: "You're a fucking liar."'

A brilliant ending to an important book about a diminished presidency. 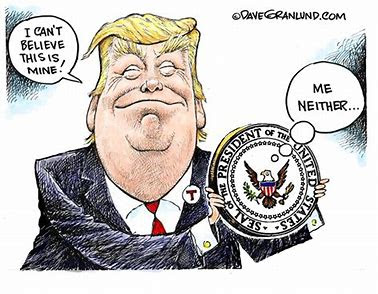