THE LONDON MARATHON 2019 - RUNNING FOR THE SALLY ARMY - PART ONE

When I had come to the end of my 26 miles and a few hundred yards in the London Marathon in April 2017, I spent a few minutes with the Salvation Army officers who were around at the end of the race welcoming their runners as they finished. I had just achieved a personal best marathon time in this, my third marathon - 05:37:29 - aged 68. Three years before, I had completed the Edinburgh Marathon in  05:42:10 and five years before, in 2012 - the year of the London Olympics - I had my first marathon under my belt in 05:40:55. So nearly 3.5 minutes faster in 2017 and five years older. It was like defying gravity but then running has always been a counter-intuitive activity for me - see my background story and the galleries featuring me as a runner by pressing here.


I was proud to run wearing the Salvation Army vest in 2017 and raise £3000 towards the development of the Sally Army's rehabilitation unit in Swindon for former drug users. I remember

saying to those kind Salvationists who were full of admiration for my running (and speed-walking!): "I would love to be back running this London Marathon again in two years, to celebrate being 70." (My birthdate is in September) And so I am!


Running marathons takes practice - every week, systematically, for around four months. My intensive training period started after Christmas and you can see at a glance what is involved in this print-out from my Tom Tom watch that records my time and distance covered when I go out running. Rather wonderfully, the Sally Army gifted me a reward for raising as much as I did in 2017 and I bought this digital guizmo watch with their sports voucher. I have to adjust the data it provides since its Global Positioning System (GPS) tracker records me running longer distances than I actually cover - weird and beyond my comprehension.


The long runs are the key to successful preparation. Building up the distances gradually. But I need to prepare on a running landscape that mirrors the flat London Thames river plain and Cornwall is many beautiful things but flat is by and large not one of them. There is though the coast. So every Monday morning after breakfast, I drive down to Marazion and set out for Penzance along the coastal foot path, heading in the direction of Newlyn and Mousehole further along the coast. Marazion to the port of Mousehole is around 7.25 miles so running there and back is a half-marathon plus a mile or so.

Here then is a photographic essay to record briefly my last long run - on Monday 4 February, yesterday. The weather as you can see was overcast - but it remained dry.

I bid the car goodbye at 9.58 am and turn my gaze inland, away from the sea and coast. Here, above and below, are the immediate running views as I exit the car park.


Now the panorama of coastal views as I stood by the car before starting the run. The visibility was poor but we're looking at a three mile run into Penzance along the coast, a further two miles takes you through Penzance and into Newlyn itself, and another two miles and a bit into the port of Mousehole. This map may help further: 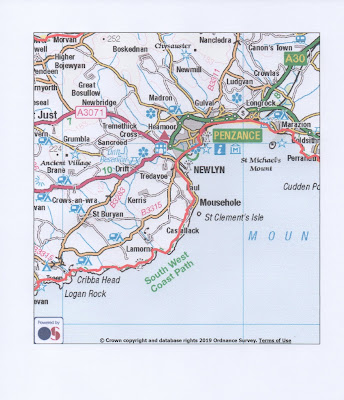 In these poor visibility views, we are looking first towards part of the stretch between the car park at Marazion and the outskirts of Penzance.

And then towards Penzance itself.


And finally towards Newlyn and further on to the mainland head where Mousehole nestles.


It took me 85 minutes to reach the harbour at Mousehole - a continuous run of 7.25 miles. I realised as I approached the last stretch down the hill into the tiny port that I would have to switch to speed-walking and running for the return journey back to Marazion. Why? I had decided the day before on the Sunday morning to go for a local circuit run of 3.5 miles knowing that my long run would be the next day. It was an experiment. For years, I have always left at least one day between runs for recovery. I should have stayed with the old wisdom. I managed the return in 95 minutes at a 13 minute mile pace, reaching the car in Marazion at exactly 12.58 - three hours after bidding it au revoir. We live to learn.

If you would like to donate to the campaign against modern slavery that the Salvation Army are coordinating, press here for the link to my Just Giving page. Many thanks to all my supporters.