THIS MISGOVERNMENT OF THE CORONAVIRUS PANDEMIC CONTINUES APACE

A couple of weeks ago, I posted a blog which pointed out that another wave of coronavirus infections was gathering pace - and established that the man in No.10 was responsible. Through his actions towards the end of January when he declared that all restrictions were lifted and that life could go back to normal ('...but do take care'!), he was ensuring that the virus would get a fresh lease of life. More people would therefore become ill, more would be admitted into hospital, more would need ventilator support, more would die. 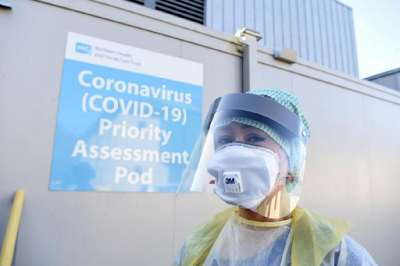 Numbers of patients with coronavirus in hospital - Monday 14 March - 11,944

These figures are going to worsen in April. The terrible fact is that this was avoidable. So why did the

man in No.10 take a course of action that has led to these outcomes?

To save his own political career.

The continuing exposure of his lies about the parties in No.10 Downing Street during lockdown had led to him being on the verge of being 'sacked' as PM, forced to resign his office. Tory MPs were gathering their forces to be rid of him after a vote of no-confidence. Boris Johnson's complete lifting of restrictions was a sop to the hard-core of neo-liberal Brexiteers within the Tory parliamentary party who had helped bring him to power in the first place. 'I am still your man!' was the clear message from the besieged PM.

Within weeks, Russia had invaded Ukraine - and Johnson was off the hook. 'Partygate' was forgotten. He need not have lifted the restrictions to save his own neck in the first place. A European war is now ensuring the pressure for him to resign has been eased.

But please do remember that as each week passes and more people die from SARS-CoV-2 as a result of this criminal misgovernment, the UK closes in on the figure of 200,000 deaths from this virus. Last Tuesday, there were 186,094 deaths with the virus on the death certificate.

Here is a headline from yesterday's 'i' newspaper:

And here are the words of Dr Stephen Griffin, an associate professor in the school of medicine at the University of Leeds, as reported in the 'i':

"Blinding ourselves to this level of harm does not constitute living with a virus infection - quite the opposite.

Public health has seemingly dropped dramatically off this Government's priorities, to the detriment of the UK population as a whole."