JOHNSON, CUMMINGS, AND STARMER - BAD, MAD, OR SAD? KEEPING THE SCHOOLS OPEN DURING LOCKDOWN WILL CAUSE DEATH

I'll start this blog-post with what for some of you may be a familiar appeal. Please - if you have come to value my writing and would like to support my bid to secure publication for my pandemic journal: 'Dying to Know' - do press the blue Follow button on this blog-post. You will find it at the top on the right-hand side but only when you have a full website screen in front of you using a laptop computer. It seems it is not visible when you are in phone mode.

Here, in this blogpost, you can read the evidence that seems to me incontrovertible. Schools must be shut in the same way as they were in the first lockdown.

Schools are engine room of exponential increase. No measures excluding them can suppress second wave

'New Office for National Statistics (ONS) figures show that 100,000 schoolchildren are currently infected with the coronavirus.

More than that, those figures again prove that schools are fuelling the second wave of the pandemic.

The ONS calculates that the children are part of the more than 336,000 people in England have the virus. But while schoolchildren represent 20% of England's population, they are 30% of those currently infected.

The virus is spreading more in schools than anywhere else - and the government is fully aware of this, because their own SAGE scientists have repeatedly told them so.

Any measures to suppress the virus are a sham if they do not include re-closing schools. The Tories must

not be allowed to let the half-term break pass without a national 'circuit break' lockdown at the absolute minimum.

And it must include schools or it is meaningless.'

'Boris Johnson is, typically, extremely late for his 4pm press conference at which he is expected to announce a new, month-long 'lockdown' across England.

However, this new measure is said to exclude schools and universities, which will remain open.

This makes Johnson's announcement yet another scam and sham, because schools and universities between them are known to be driving almost 40% of new infections.

By contrast, pubs and clubs - which will close - account for only around 4% of new cases.

This reality is demonstrated in the latest numbers from Northern Ireland, which did close schools as part of its 'circuit breaker' lockdown: 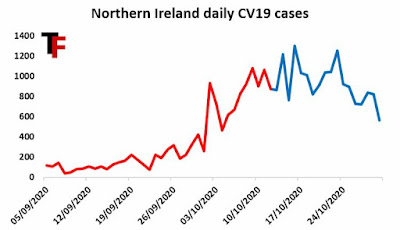 The change from red to blue marks the closure of schools - and a week later, in line with the incubation period of the virus, cases had begun to fall sharply.

A 'lockdown' in which the biggest driver of the second wave is left running is a con. Johnson is too late - and definitely doing too little.

His arrogance and shoddiness will put thousands more needless deaths on his already guilt-stained hands.'

One month ago today, Keir Starmer appeared on the BBC to warn that the role of schools in fuelling the second wave of the coronavirus pandemic was 'inevitable' and 'known'.

'This morning, he appeared on the BBC's Marr programme to insist that schools must remain open:

He maintained that insistence even after Marr challenged him that scientists and unions say that keeping schools open will prolong the England-wide lockdown that Starmer agrees will damage the economy.

It's hardly the first time Starmer has flip-flopped on schools and the virus. In August, he warned Johnson that he must re-open schools in September 'no ifs, no buts' - and then in his October statement insisted they were an 'inevitable' risk.

And, as the SKWAWKBOX will reveal exclusively later today, he was warned by Labour's own coronavirus policy advisers that schools would need to close.

Boris Johnson is a disaster for this country, costing tens of thousands of needless deaths and the worst economic impact of any leading nation. The lack of an effective opposition is giving him a free ride.'

Exclusive: Starmer still wants schools open, but Labour’s own COVID advice was that they MUST close to beat second wave – and the Tories

'A former Labour policy adviser who spent his final period with the party working on its response to the coronavirus pandemic has revealed that his conclusions on the need for schools to close were ignored by Labour's leadership.

"a disaster in which the Party, for which I have worked hard in voluntary and professional capacities since 2013, is complicit"

A parting message to the party, backed up by WhatsApp messages and emails seen by the SKWAWKBOX, show that Labour and its leadership have been repeatedly informed of the overwhelming scientific consensus that schools must close - and the improvement in public perception of the party that would result from a firm stance on schools.

Emails and WhatsApp chats show a string of messages drawing the attention of party managers to:

In spite of these clear warnings from Labour's own personnel and the political gains opposition would bring - and the mass toll in needless deaths a prolonged second wave will cause - Keir Starmer has continued to back Boris Johnson's approach - and to insist that schools must remain open even though it will prolong the lockdown in other areas and increase the damage to the economy.'

OH WHAT A MESS OF GOVERNMENT AND OPPOSITION THIS IS!