In Part One of this series exploring Cornwall under the tourist surface, I placed our county in the context of the national consequences of the Conservative Austerity programme that has had such disastrous consequences for the state of Britain. That Austerity programme was the product of the Tory elite's devotion to an economic theory - neoliberalism - that holds that markets need to be as free as possible and the role of the state therefore needs to be reduced to its barest minimum. Corporations and people will then pay less tax - and everyone ends up better off. Make no mistake, it is a failed economic theory. The rich get richer - but inequalities deepen and the poor suffer as never before. Our welfare state now depends on charity. Those wonderful, far-sighted and compassionate people who were responsible for the creation of our system of welfare for all during the 20th century would be horrified to see how far the Tories since 2010 have turned the clock back in the direction of less civilised and humane times.   Press this link here for Part One.

In Part Two, I detailed some of the consequences of the Austerity programme as it works its nasty way through a Penzance housing state and its families. Press this link here for Part Two.

Now in Part Three, I am sharing what I have discovered about food poverty and other consequences of the Austerity programme in the idyllic seaside town of St Ives where Louise and I live. Last Monday evening - April 1 - I attended the AGM of the St Ives Community Fund. Online I had seen that a guest speaker, Chris Wallis, was giving a talk on the St Ives Food Bank. For me, as a Labour Party activist, this would be a golden opportunity to find our more about a matter of which I knew little.

We had become residents in St Ives in January 2013. Within a year or two of our arrival, I remember walking through the church grounds of St John's in the Fields, the C.of E. church at the top of the valley side I ascend each day with Ella our canine on her daily walk to the field in which she can run. Pausing outside the church hall, I read on the notice board that a food bank operated here on a specific day and also at a couple of other sites in the town. That was the sum of my knowledge until last Monday.

his guise as 'Mr Colenso', the store keeper and owner of the business that has everything you could possibly need by way of hardware. When I decorated the house, everything was bought from Colenso's. It was Colin who introduced Chris Wallis and here is my account of Chris' s story:

Such important work is being done to help those in need in St Ives. Chris Wallis is an unsung hero. The St Ives Community Fund is dedicating the proceeds of the June 2019 Secret Gardens event to the Foodbank for its use. For all this, many thanks. 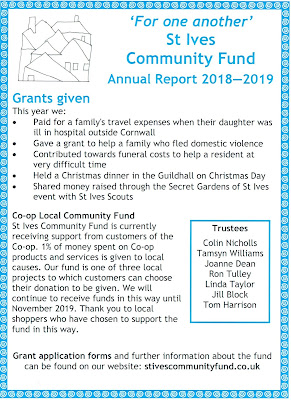 But we must never forget what has caused this human distress and need, namely a Conservative government programme of Austerity. 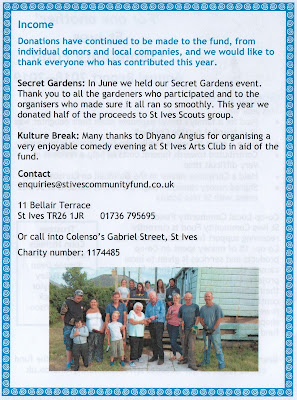 As I heard Jeremy Corbyn say at Heartlands in Cornwall on two separate occasions, in 2016 and 2017, 'Austerity was never an economic necessity; it was always a political choice'.