THE LONDON MARATHON 2019 - RUNNING FOR THE SALLY ARMY - PART FOUR

This post serves as a review of my training in preparation for the challenge of being a runner in this year's London Marathon, next month. I came to running late. It was not until I was in my mid-30s, that I started to run for fitness and charities. And now three and a half decades later, I am still not a 'proper' runner in my body or mind. Yet, counter-intuitively, through what I have termed bloody-minded determination, I seem to have persuaded a genetically-challenged frame to continue moving at a running pace that covers a mile in 11.5 minutes for over 13 miles. 5mph for 2.5 hours, aged 70.5 years, feels no mean accomplishment for someone who has never seen himself as an athlete.

How has the training programme worked out this time round? Let me start with a comparison. The schedule I devised for the London Marathon in 2017, when I also ran for the Sally Army - and raised £3,000 for their drug rehabilitation unit outside Swindon - saw me in January extending the distance covered in my long runs by lengthening my local circuit runs. All the running was from my own
doorstep, out and back:

On January 2 - 3.5 miles (1 lap, up the hill to Little Trevalgan and back down) in 36 minutes; then three more long runs on Sundays and five single laps of the local circuit before January 29 - 10.5 miles (3 laps of this local circuit in 1 hour 47 minutes).

Then, in February, I started the routine of driving over to Marazion, parking, and then running SW towards Penzance and further on to Mousehole through Newlyn as I built up the distances on the long Sunday runs.


No question, I am slower now on the hilly local circuit. On a good day, I can manage 37 minutes; a double circuit a few weeks ago took me 40 minutes plus 41 minutes (although it was windy!)


If January 2019 had gone rather well, February 2019 proved rather more problematic. My big mistake was to run a local circuit lap on the Sunday before the long run on Monday 4 February. Over-confidence; a spirit of experimentation - whatever the reason, it was a classic error and I should have known better. I had always rested the day before a long run - until now. As I approached Mousehole with the intention of running down to the harbour, my leaden legs were telling me that I would not be running up out of the village. It took 1 hour and 28 minutes of continuous running to reach the heart of Mousehole and then the switch to speed-walking and running saw me back into the Marazion car park in exactly 3 hours. The hills are overall in my favour on the return journey as was the wind. But I had lost the experience of continuous running.

The remaining three long runs in February were all into Marazion and then turning to run back but I never made it all the way back in a continuous run. All three were around 14.5 miles in around 2 hours 55 to 3 hours 2 minutes - good stamina building regular runs, but I was looking to return to the experience of running continuously from and back to Marazion.

The solution I found this month, in March, has worked really well so far. I decided that I had to accept that being two years older and having turned 70, the hilly bits from Newlyn to Mousehole and back were proving a hindrance - and in any case, the point of going to the coast for the long run was to replicate the flat conditions of the London Thames estuary course. I therefore decided I would run as far as the Newlyn slip, just before the hill out to the coastal route to Mousehole, and then turn and run back to Marazion - 11.5 miles of continuous running on March 4 taking 2 hours 12 minutes. I was adopting the Maoist strategy: one step backwards now; two steps forward in the future. The pleasure of still running as I approached Marazion and St Michael's Mount was tangible.

This Monday, March 18, I extended the run by two miles and a bit more besides by running the promenade section twice more on my outward journey. Now it was 13.5 miles of continuous running in 2 hours 34 minutes.

Two more long runs to go before tapering down for the last three weeks before the Marathon itself on Sunday 28 April. I will repeat the extension of the promenade section each time for those last two long runs - building up, I hope, to 14.5 miles and then 15.5 miles for the last long run. That would match the kind of distance and time achieved in my 2017 preparations when I ran continuously from Marazion to Mousehole and up to Paul and then back to Marazion.

Now though I have grown older and - to paraphrase T.S. Eliot - the bottom of my trousers are roll'd enough for my legs to baulk at the hilly bits. But the mind is still fresh and we are rather pleased with the plan we have devised to compensate - a plan of such cunning that Baldrick himself would be applauding if Blackadder were to give him permission.

To finish - a picture of canine (Ella)and human bonding, taken by Louise today, and a link to press if you would like to join the list of sponsors - please press here: 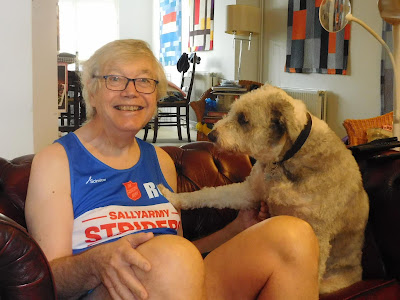