public opening plus 2 hours for our private opening - and the show attracted around 220 people and 45 written comments.


Here, in these blog-posts, I weave together some of the brilliant digital images produced by Leo Walker during the Private Opening with the thoughts of those who came and viewed the exhibition over the seven days. First, though, a couple of images of the wonderful Crypt Gallery itself, taken by Larisa Walker using a tripod - what a setting to show to advantage these works of art! 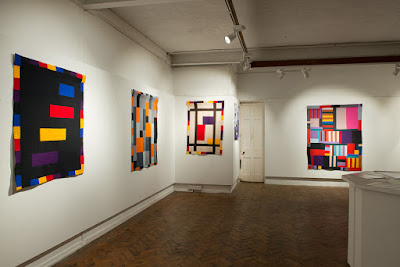 In the late 1940s, this gallery space became the centre of the rebellion of the modernist St Ives' artists such as Patrick Heron, Peter Lanyon, John Wells, and later Barbara Hepworth against the St Ives' establishment artists, literally lauding it above them in the main part of the former Mariners church. 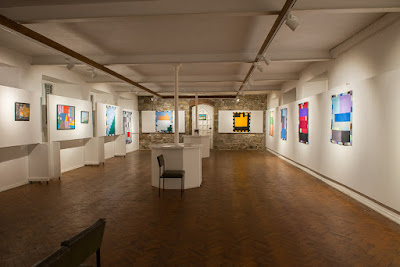 And the public reaction to Louise's show?

Four comments on the first day before the Private Opening in the evening:

'A wonderful show - art as therapy politics is so meaningful and beautiful. Congratulations on achieving such an inspiring result.'
'Lovely inspiring work!'
'Beautiful work. Great colour combinations. Love the 'Mondrian.'
'Beautiful - love the colours and boldness.'


The next day was Sunday - Armistice Day - the 100th anniversary of the signing of the Armistice that ended five years of slaughter in a world war fought by imperialist powers. For what? Prestige? Territory?  Millions of men died in a blood-bath of trench warfare that through vindictiveness and opportunism at the Versailles Peace Conference served to sow the seeds of the second World War, twenty-one years later. We love the comment from a visitor from Penzance:

'What a thought-provoking exhibition, timed perfectly for the 100 years memorial: 'Happenings'.'

The timing was accidental but Louise's belief that 'People matter' is the lettering that runs through this exhibition like the messages in seaside rock. The lives of the millions who went to their early graves mattered - but they became disposable commodities in the power games conducted by the rich and powerful.

Other voices from that Sunday left a remarkable testimony to the power of the two-way conversation between artist and viewer:

'Thanks - a very considered and original collection.'

'Very beautiful and evocative quilts. We were inspired and humbled to view your work. Thank you.'

'Thank you so much for this exciting exhibition. Very touching. I am very moved by the piece called 'Grief' - it moved me to tears - it so explains the range of emotions. Thank you again.'

The last words in this first post in the series I will leave to our dear friend, Julia Bush, who appeared on Sunday afternoon. All the other quotes have been from strangers.

'My third visit to this wonderful exhibition, looking so 'complete' in a beautiful space and accompanied by a very informative catalogue. There is much for an 'expert' to admire, but I enjoyed it simply for the beauty of the colours, the subtlety of the varied stitching and the poignancy of the human experiences rendered into an art form I had never really encountered before. Thank you - and well done! x Julia'


Thank you, Julia - and everyone else quoted. I am looking forward to producing the next post in this series that tells the story of this past week of artistry.