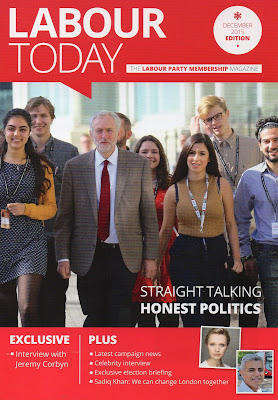 I rejoined the Labour Party in 2015 almost as soon as Jeremy Corbyn (JC) was elected leader on the back of rule changes that in effect allowed ordinary members to determine who would lead the Party. The prospect of a socialist vision for 21st century Britain becoming a reality through the ballot box in a General Election was awesome. I had just completed the writing of

my tale of a modern, secular Pilgrim's journey through the social and political landscape of our country between 2010 and 2015 and called it "Deception". Those responsible for the misgovernment of our land during this half-decade had been put to the literary sword. Now I added two chapters, bringing in the 2015 General Election disappointment and then the hope springing from JC's election as Labour leader, and renamed the book: "The Road to Corbyn". Here's the link to press if you haven't got a copy yet - TRC.

A month or so ago, my heart missed a beat when one of the people behind the Penzance Literary Festival - Linda Camidge - wrote, out of the blue, a review on Facebook that read 'It is a really interesting and unusual book. A Robert Tressell for our times. There are few higher compliments as far as I am concerned.'  Same goes for me, Linda - to be bracketed with the author of the socialist classic: "The Ragged Trousered Philanthropists" (RTP) is indeed praise to cherish.
The hero of the RTP, Frank Owen, analyses a class struggle against those who hold power and wealth but he also describes in telling detail how the enemies of socialism are to be found amongst his fellow workers. Koser's research tells a parallel story. Here are some of the headline stories from Koser's recent postings, starting with this story from the Momentum general election campaign - South West web page, headlined 'Devious tactics by Blairite saboteurs!':
'Jeremy Corbyn's campaign chiefs at Labour HQ micro-targeted the leader and his aides with Facebook ads at the last election because they didn't agree with some of his left wing messages.
The explosive claims were revealed in a new book — Ctrl Alt Delete: How Politics and the Media Crashed Our Democracy — by Tom Baldwin, who was Ed Miliband's chief of communications.
He said: 'Corbyn's aides sometimes demanded big spending on Facebook advertising for pet projects which Southsiders [officials at Labour HQ] regarded as a waste of money.

Campaign bosses managed to convince the Labour leader they were doing what he wanted by spending £5,000 on the ads designed to be seen by Corbyn and his advisers, but that others couldn't see, as reported by The Sunday Times

An official explained, 'if it was there for them, they thought it must be there for everyone. It wasn't. That's how targeted ads can work.'

Wow! What price democracy when your enemies are that close. I remember waiting and waiting and waiting for the call to campaign when that 2017 General Election was called by Theresa May and so little materialised by way of campaign materials or money or direction. It was almost as if national HQ - and by extension Regional HQ - had decided that since the Labour Party could not win in the St Ives Constituency - it was a marginal seat with the battle for control between Tories and Lib-Dems and the best outcome would be a Lib-Dem victory -  the less activity from the Labour party the better. In the event, the Labour vote rose by nearly 5% on the back of the Corbyn surge. But the Lib Dem's vote rose by nearly 10% with, one suspects, thousands of tactical votes from those Labour-inclined. Yet the Lib Dems still fell 312 votes of unseating the Tory MP.

All this I offer as an explanation in my role as an academic and a historian seeking to understand my experience.

Back to Koser and her revelations and the other stories that are emerging of local and national Labour politicians who have had their identity shaped by the assumptions of what Tony Blair called 'The Third Way' - a New Labour Party that rejected the possibility of ever gaining power by offering the people a socialist vision. Such Blair-like politicians seem adamantine in their resistance to change.

'Blairite domination is certainly rife in the West Midlands Regional Labour (my own area) and I doubt there are many more devious regional bureaucracies to be honest. I've been a member since June 2016 and I've observed some rather shocking practices that I have taken the liberty of reporting to the NEC and directly to Labour's General secretary, Jenny Formby. However, despite chasing them for nearly a month now, I've had little joy in getting anyone to respond, let alone getting any kind of resolution … in my opinion, if we're going to take control of the party out of the hands of this small clique of right-wing, anti Corbyn zealots then we need to start speaking out and sharing evidence.'

So here are some of the details Koser shared online to date:

'Asides from the fact that we might have a General Election any day now, there is another immediate concern I have for Hodge Hill CLP that has forced me to go public now. Tomorrow we will finally have an AGM, a full 2.5yrs since the last one in January 2016. However, I have been made aware that Hodge Hill CLP is controlled by a number of family cartels who have installed ghost members who a) only attend AGMs and selection meetings and b) vote according to the instructions they're given by the families controlling the CLP. Some of our local Cllrs actually negotiate with these people to ensure that they get their allies appointed to the CLP and Ward Executive, or selected as Cllrs and MPs. I’ve attached screenshots of a text conversation I had with Cllr Majid Mahmood over a number of days between 14th Dec 2017 and 2nd June 2018, at the time we were hoping to have our AGM in January and I was hoping to stand for Women’s Officer. Our last Women’s Officer (Elaine Daley) hadn’t attended a single CLP meeting in at least 2yrs, let alone made any effort to get a Women’s Forum off the ground and, as I had already managed to organise a successful Women’s forum meeting by this point, I was fairly confident that it would only be a formality. You can imagine my shock when Cllr Mahmood told me I was wasting my time and informed me that we had ghost members in our CLP who decided these things and that our CLP Secretary, Diane Donaldson, was also aware of this and knew that Cllr Mahmood would have to ‘negotiate’ with these people and that “deals” would “have to be done” in order to secure appointments to the executive.
It's worth mentioning here that my own ward (Washwood Heath, now Alum Rock) as well as Hodge Hill Ward all have Councillors (Cllr Majid Mahmood, Cllr Diane Donaldson, Cllr Ansar Ali Khan, Cllr Mariam Khan and Cllr Mohammed Idrees) who are happy to negotiate and in some cases may well have close ties to these families. My ward, in particular, has had no official ward meetings for nearly 3yrs but our Councillors decide how to allocate large sums of grant money within the community without consulting ward members and no one seems to know how or where that money has been allocated. That said, last September, the three Cllrs in my ward (Ansar, Mariam and Idrees) held a so-called ward meeting but only invited about 15 people (ghost members) because they wanted to ensure the two male cllrs would be selected (going against the party policy of 1 male, 1 female cllr) to stand in the upcoming local elections. Other members got wind of the meeting and over 30 people turned up in the end. I attended but demanded that they reschedule the meeting and invite all the ward members next time but no other meetings were called (I’ve attached screen shots of cllrs at fake ward meeting).
It’s also worth mentioning here that ordinary members of Hodge Hill CLP are deliberately kept at arm’s length. We are not given any training or guidance, we have no sub groups at all (Womens, Youth, Bame, Disability for example) and so very few members feel confident enough to stand for an executive post in the first place.
There are a number of other serious concerns we have at Hodge Hill CLP and with WM Regional Labour. I don’t want to go into too much detail at this point but it covers things like…
a) Questionable applications from candidates standing as cllrs that were approved by West Midlands Regional Office and Regional trying to block new members from standing.
b) Serious concerns about the less than kosher practices of the Birmingham Board
c) CLP executive colluding with certain individuals at West Midlands Regional Board (mainly Keith Hanson) to block people from setting up forums, having meetings or organising in any way.
d) West Midlands Regional Labour manipulating NPF candidate voting at the WM AGM.
e) No proper Treasurers Report for nearly 4yrs and, as no auditors were appointed during that time, the Treasurer’s husband’s accountancy firm have been doing the auditing. Note, the previous Treasurer, who was the Treasure for about 15yrs and very efficient, was deliberately forced out by Keith Hanson (WMRO).
Needless to say I have collated a lot of supporting evidence on all these issues and sent them over to Jennie Formby, Jon Lansman and a number of people on the NEC, along with a detailed report. I gather the matter is currently with the Governance and Legal Team and I’m told they will respond in due course. That said, the Hodge Hill AGM is still going ahead tomorrow, despite my repeated pleas for an intervention (I’ve been chasing this up for nearly a month now) and, I understand that Hodge Hill CLP isn’t the only CLP under West Midlands Regional control who have had similar issues and are calling for their AGMs to be suspended. In fact, as I understand it, Cannock, Sandwell, Walsall and West Bromwich West have all asked for their AGMs to be suspended until a new regional Director is in place. No decision have been made and all the AGM are all still going ahead.' 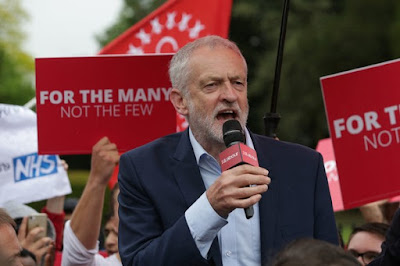 And from others responding online:

'God - and I thought it was bad in Sheffield. Ours is nowhere near as bad!'

'Birmingham Board has got to go. Birmingham LP has special rules to have a Board rather than a district LP of elected delegates.'

'I have now waited 16 months for a response to similar actions in Portsmouth.'

'We too have problems in Trafford'.

Enough, I feel, for now. There is a problem. That we have established.