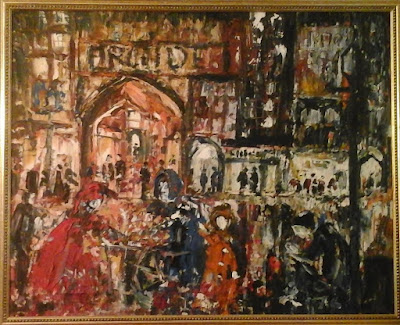 
These words of Jago are given detailed attention in Chapter Nine: ‘Jago on Jago’. At this point, I want only to raise the question: Why did Jago apparently cease to produce the palette-knife


Only one exception has surfaced, a painting owned by an American couple, Keith and Joan Goodenough, who have kindly sent me an image – (see below, for a detail). This remarkable Jago palette-knife is dated 1976 and its story is told in Chapter Nine. One explanation for the absence of palette-knife work is that he had, by and large, outgrown the need to do so. The shadow of the prison bars had faded. It was no longer necessary to work through those inner landscapes of his captivity, not least since he was living on the wilder side of the tracks from 1971. To use Jessica Raber’s term, the ‘artistic lifestyle’ was taking over." 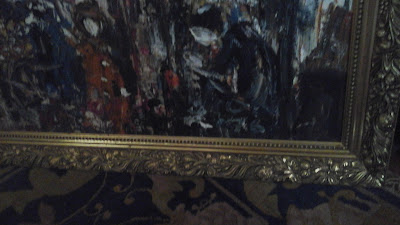 The following section is taken from Chapter Nine: 'Jago on Jago':
"This biography has its own style. I am writing the story of Jago’s life and I am also writing the story of the search in cyberspace to discover more about that story. Each story has its own chronology. I am reflecting on that duality as I reach this point because it was only a couple of days ago that I got an email from the United States that sheds important light on that odd palette knife painting of Jago’s that carries the date of 1976 – over half a decade later than any other I have seen. Not only does that email provide more information. It also illustrates the importance of understanding the fact that so many of the palette knife paintings - the ones that have been compared with the German expressionist school – are the creation of a man whose imagination is soaked in memories of prison life.


Here are my correspondents from the United States, a Virginian lawyer and his wife, explaining how they acquired this Jago palette knife dated 1976 in an auction in Virginia in August 2017:


‘Most of our collection of paintings are nineteenth century European landscapes, and we do not usually consider buying post-WW11 works, still less works by palette-knife. However, immediately I saw this Jago Stone palette-knife work, without even knowing the name of the artist, or even much about the use of palette-knife, I realised it was a masterly and important example of that technique.’


Jago – you have been recognised!


‘… As one retreats from the painting to a distance of, say, three metres, the way it coalesces into a readily recognisable street scene is quite remarkable, and the colours, though not typical of such a scene, are absolutely appropriate. It is difficult to imagine how the artist, who obviously had to work at close quarters, achieved this effect. We should be interested to learn the approximate number of palette-knife works by this artist that are extant. He and those particular paintings deserve public recognition.’


Agreed. But this, I suggest with evident reason, was no ordinary street scene emerging from a more distant perspective. It is a picture created by an imagination resonant with images of prison landings and communal areas with tables piled up with prison stuff, around which sit and gather the inmates, while all around there is the movement of prisoners free at least for a while from their cells. Is there also a hint here perhaps of a chess game, modelled on Ingmar Bergman’s image from ‘The Seventh Seal’, as Death is paired with the Knight?"
Another palette-knife painting of Jago's that I came to know about recently is shown below. It seems to be undated but the other Jago paintings - water-colours - in the second-hand shop where my correspondent, Helen Drake, saw them together were dated 1969. It is not difficult to see an imagination shaped by the best part of two decades behind prison bars at work here: 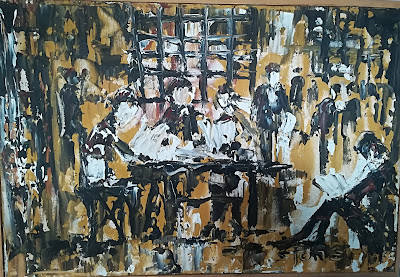 And to close this Newsletter a reminder of two palette-knife paintings that Louise Donovan's parents, Ronald and Phyllis Watkins commissioned and/or bought in the period from 1969 to 1970 when they were living in Gerrard's Cross in Buckinghamshire and Jago Stone was earning an honest living as an itinerant artist, living in a mobile home with his partner and two children, somewhere in the vicinity.
The first is a painting that is titled: 'The Makers of Sweet Smells' and is dated 1969. It used to hang in Ronald's office when he worked as a director in the Oil of Ulay company and afterwards.  Here it is below:

The second is below, complete with its story:

The second painting in this series is titled: 'The Fancy Dress Party' and is also dated 1969. Phyllis commissioned the work and it was duly hung in the family house. Shortly afterwards, Jago turned up at the door and asked to borrow it for an exhibition - probably in Eton, close by. Consent was given. Time went by - and Jago reappeared but not the painting. Eventually, Phyllis brought the matter to a head: 'You've sold my picture, Jago - haven't you?!!' Jago smiled. 'Actually, yes! And I got a very good price for it ... but I promise I'll  paint you another one, even better.'  He did and that's the one you are looking at above. There will be some more palette-knife paintings to enjoy next month in the April edition of the Newsletter - and later in a blog.
'Jago' in its first draft state is now complete - ahead of schedule. Any comments or information do get in touch - my email is robdonovan@waitrose.com.