Here is a link to Part One that I published yesterday - just in case you missed it.

Having returned from our close encounter with the Crowns, John Toman, my guide, next pointed out the ruins of the late-19th century steam pumping engine house of West Wheal Owles. This ruin, carefully photographed, featured in the TV series 'Poldark'.

We took a few steps off the path to the left and behind the engine house lay the memorial to those killed in the Wheal Owles disaster on 11th January 1893. John had told me of this memorial when I shared with him, a few months ago, news of my discovery of articles about this disaster in my digital trawl through Victorian Cornish broadsheets. You will be able to read the fruits of my research in a section of 'Mine to Die' that focuses on the Wheal Owles tragedy. Publication is scheduled for 2024.

"On [that day] miners were blasting a new level towards what Richard Boyns, the mine's purser (the paymaster or cashier of the mine) thought would be a rich lode. Shortly after 9 am, the tunnelling miners breached the walls of the flooded 148 fathom (888 feet) level of the neighbouring Wheal Drea workings. The force of the inrushing water created enough air pressure to blow out a crater on the

surface. The purser had been 40 yards out in his calculations, failing to take into account that magnetic north shifts year by year. Nineteen men and a boy (on his first day underground) were drowned; their bodies are still at the bottom of the mine."

John expressed his scorn for any referencing of magnetic north in explaining what happened. He did not elaborate - but he did reference all the iron, natural and man-made, that could be found down a Cornish mine which would make any attempt to take account of magnetic north impossible. My own research into the newspaper coverage of the time will be interesting.

At this point in the walk, John offered me the opportunity to call it a day. He knew the difficulties I had faced getting down to the Crowns and alerted me now to the steepness of the Kenidjack valley sides, our next planned destination, and then the length of the stretch back from Cape Cornwall to St Just. A nice piece of reverse psychology, perhaps! By emphasizing the difficulties, John was making me all the more determined to overcome any issues we might encounter. I assured John, we must go on.

I am so glad our journey continued. The Kenidjack valley is an extraordinary phenomenon. Here is my first photo image of the valley:

We had to descend down the path, and occasional steps, to the valley bottom - and then ascend the other side of the valley.

Bates and Scolding, in their guide book, capture the view in Victorian times rather well:

'[You are] looking at the remains of one of the most industrialised zones in West Cornwall. In the 1850s this was a thudding, clanking scrum of buildings, stretching uninterrupted up the valley as far as you could see - including 18 tin stamps, settling tanks, buddles, whims, pumps, calciners, stores and a grist mill, all jostling for the water power of the stream. By the time the stream reached the sea its waters - running red from iron oxide - would have been channelled along leats and culverts to turn about 50 wheels ... A flash flood in 1893 destroyed most of the buildings and helped put an end to tin processing in the valley.'

The collapse in tin prices did the rest.

As John Toman emphasised to me, water was so important in the refinement of the tin ore. Tinners, who were extracting their tin ore from much closer to the surface than in the deep shaft mines, needed access to the equipment in the Kenidjack valley to render their ore into precious and saleable tin.

Here is a Victorian photo image of that extraordinary industrial landscape:

And here is an image of the Kenidjack valley that I took last Tuesday as I climbed up the steep slope on the other side of the valley:

Once we had left the valley, we made our way to the Cape Cornwall headland.

John, at this point, told me the story of Captain Francis Oats (1848-1918) whose memorial plaque I discovered in the St Just parish church the next day when Louise and I were in St Just for our dog Ella's grooming.

This is the Oats story, courtesy of Wikipedia:

Francis Oats was born on 29 October 1848, at South Torfrey Farm, Golant, near Fowey, Cornwall, England, in the parish of St Sampson. His father was a farmer. The family moved to St Just in Penwith, a mining district, about 1854. Like most young men in the district Oats became a miner when he left school, but every week he would walk to Penzance, seven miles away, to attend evening classes so he could become a mining engineer. At the age of 17, Oats placed second in the mineralogy examination for the British Isles, and obtained a high grade in mining, a subject in which he had not been instructed. He was offered free tuition at the London School of Mines but would have to pay his expenses, and no scholarship was available.

Francis Oats was first appointed Mine Agent in 1871. He was mining captain at Botallack Mine. For a while Oats also gave science classes in the Botallack district. He married Elizabeth Ann Olds on 17 August 1874, in St Just in Penwith, daughter of a butcher.

On 9 December 1874, Oats was appointed Cape Colony Government Mining Engineer at Kimberley, South Africa, at the age of 26. Oats left for South Africa on a 20-month mission in January 1875.

Oats resumed his position at Botallack as soon as he returned. 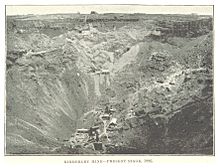 In May 1877 Oats was asked to take a position in Kimberley, which he accepted.The job was to run the Kimberley mines for Baring-Gould and Atkins Co. In 1883, he joined the Victoria Mine company. De Beers Mining, headed by Cecil Rhodes, obtained control of Victoria company in 1887 and Oats became a director of De Beers.

By the start of 1890, De Beers had an effective monopoly on the South African diamond trade. The poorer mines had been closed and production reduced to push up the price of diamonds. The Wesselton Mine was discovered late in 1890. The De Beers directors were unwilling to buy the mine, but were reluctantly persuaded after Oats had investigated it and described the damage it could do to diamond prices.

Searchlight at the Wesselton Mine during the Siege of Kimberley (1899)

There were many Cornish miners at Kimberley, particularly as the mines became deeper and their skills in mining hard rock became more important. Oats did his best for these miners. He insisted that De Beers give each miner a yearly paid holiday in Cornwall. He also forced adoption of water hydrants to lay the dust created by mining drills, the main cause of silicosis. He became president of the Cornish Association at Kimberley. Oats was elected to represent Namaqualand in the South African parliament, holding office until 1907. During the Second Boer War in 1899, Oats was a member of the Civilian Defence Force. In 1901, Francis Oats and his son Francis Freathy Oats visited South America.

Oats became known as an authority on diamonds. In December 1906 Oats visited Henri Lemoine in Paris with three others, and saw Lemoine (stark naked to show he had nothing hidden) mix substances in a crucible, heat it in a huge furnace, and produce tiny diamonds. Oats demanded repeats of the experiment, and remained sceptical of some trick, saying the diamonds were too close in colour and shape to those of the Jagersfontein Mine near Kimberley. Lemoine was arrested on charges of fraud on 11 December 1907. In 1908, a Parisian jeweller said he had sold Lemoine some small, uncut diamonds from the Jagersfontein mine that matched the description of the diamonds Lemoine was supposed to have manufactured. Lemoine fled the country before receiving judgement.

In 1908, Oats was appointed chairman of De Beers. 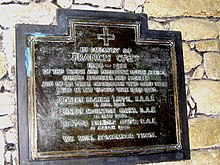 The Kimberley diamond mines were shut down on 8 August 1914, soon after the start of World War I (1914–18). Francis Oats said the 1,000 men employed at the mines would be given half pay until the end of January 1915, when the company would decide what to do next. He said of the closure,

Today we are onlookers at the greatest crisis the world has ever known. As to how long that crisis may continue we can have no foreknowledge. I have to tell you, however, that since the declaration of war we have sold no diamonds at all. We have to recognise that we are a company producing a luxury, which naturally does not find a sale in circumstances like those that we face today. We are perforce compelled to mark time. We have faith that things will eventually right themselves, and that our product will again be in demand. But today we have to face the fact that no demand exists. We have therefore to ask ourselves, shall we go on working without selling diamonds? I need scarcely tell you that the position has been very anxiously discussed. There have been differences of opinion among the Directors but in the end we came to the conclusion that while this state of things lasted we must as far as possible confine ourselves to marking time, and not further increase the stock of unsold diamonds already on hand.

In May 1916, the Wesselton Mine and Bultfontein Mine were reopened, but the Big Hole had closed for good. Francis Oats died on 1 September 1918, in Port Elizabeth, Eastern Cape, South Africa.[22] He was survived by his widow, daughter and three sons. The Francis Oats House, a hostel for pupils at the Kimberley Boys' High School, was built in 1920 and was still in use in 2016.

On a visit back to Cornwall, Oats bought shares in the Levant Mine. He also took shareholdings in the Cape Cornwall and Kenidjack mines. At the time of his death he was chairman of Basset Mines of Redruth. He tried to modernise the tin mine at St Just by sinking a new vertical shaft so that ore could be raised direct from the lower levels to the surface, a project that seemed even then to be uneconomical. His large investments in mining in Cornwall were misguided, since the industry would collapse after his death.

Oats arranged for construction of Porthledden, a 21-bedroom mansion in Cape Cornwall designed as a gentleman's residence that was completed in 1909. He does not seem to have spent much time there, perhaps due to the length of the journey from South Africa. The terraces of the garden are above the north side of Priest's Cove at Cape Cornwall. On the south side of the cove there are adits cut into the cliff for the St Just Mine. His son made Porthledden into a hotel, but it did not succeed. It was sold in the 1950s to pay off family debts, and later fell into disrepair.

Like John, I find the story of Francis Oats extraordinary. It deserves to be better known. His was a 70 year lifetime in which he started as a Cornish farmer's son and ended up as the chairman of the richest diamond company in the world, located in South Africa. He was a man who had travelled to Europe, Africa, South America. This was the man who was rich enough to buy Cape Cornwall and have Porthledden House built for his retirement - but who died too soon to enjoy those views.

In 1987, Cape Cornwall was bought by HJ Heinz Ltd who later donated it to the National Trust.

And so, from Cape Cornwall, we made our way to the bus station in St Just and took the 3.15 pm Tinner home.

The next journey of the St Ives Boys is to the Carn Brea area in August.