SHIFTING THE RESPONSIBILITY - 'NOT ME, FOLKS! NOT US, YOUR GOVERNMENT!' - 'IT'S YOU, THE OIKS, WHO ARE TO BLAME!'

SKWAWKBOX continues to nail Boris Johnson and his crew. A couple of today's SKWAWKBOX posts follow - but first a cartoon (with grateful thanks): 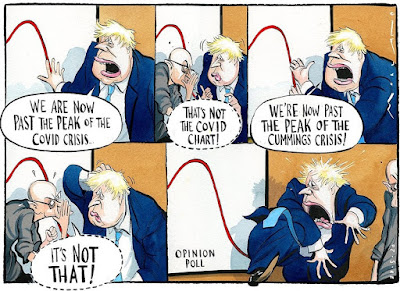 'Arrogant and cowardly PM wants to shift blame yet again, in spite of record of consistent and willful failure 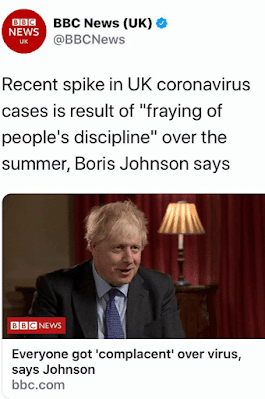 Boris Johnson says it's your fault that the UK is suffering a massive 'second wave' of the coronavirus pandemic. Speaking to the BBC, the Tory PM claimed 'everyone' became 'complacent' over the virus and

this 'fraying of people's discipline' led to the second wave.

And he took no action whatever against Dominic Cummings, whose repeated trips to the north-east, including a 60-mile round trip to 'test his eyesight', destroyed public confidence in anti-pandemic measures.

Not only that, only a month ago he told MPs that he takes,

full responsibility for everything that has happened under this government.'

Well, the second wave comes under 'everything', yet true to form, Johnson now wants to blame the public for the consequences of his decisions.

This is the same Johnson who refused even to express regret for the tens of thousands of needless deaths his delays and arrogance during the first wave caused. Is anyone really gullible enough to fall for his cowardly excuses and blame-shifting any more?'

And here is another of today's posts from SKWAWKBOX: 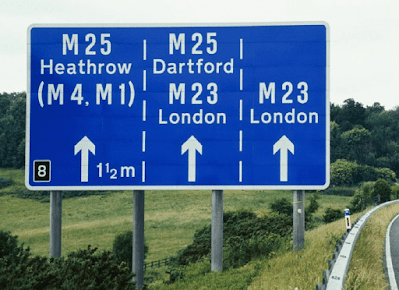 Greater London councils - and almost certainly councils across England - have been forced by the Tory government to agree not to reveal information about the extent of coronavirus outbreaks in their areas, according to responses to Freedom of Information Act (FOI) requests.

Bromley and Hounslow councils both provided identical responses to requests from a campaigner for information on coronavirus outbreaks in schools within their boundaries, saying that they could not share the information requested because of an agreement with Public Health England.

The identical wording strongly suggests the response is a template provided by the government in anticipation of such requests for information - and that the Tories always intended to keep the public in the dark about the consequences of their reckless haste to return children to school, in spite of warnings from their own scientists about the inevitable rise in infections it would fuel.

And if two London councils are only receiving data from the government in return for keeping it secret, it's a safe bet that all councils - in London and around England at least - are being forced to do the same.

The Tories were warned - even by their own SAGE scientists - that re-opening schools would fuel a 'second wave' of the pandemic, a warning that has come predictably true. And it now appears that the virtually the only thorough preparation the Tories did for those consequences was to keep them secret from the public.'

THE MORE WE KNOW ABOUT THIS MISGOVERNMENT, THE BETTER THE ODDS ON BRINGING

THESE PEOPLE TO JUSTICE