A GLIMPSE BACK IN TIME - A GIFT FROM THE GODS IN THIS COVID YEAR.

Yesterday, the gods were very kind and gifted me a glimpse back in time. These deities had taken the shape of Marathon Photos - the guys whose framed pictures cover a wall or two in my study. I have their images, taken by their photographers and purchased by me at some expense, showing me running in my four marathons - London 2012, 2017 and 2019; Edinburgh 2014. They have performed an excellent service for hundreds of thousands of runners over the years - and made a worthwhile profit too.

Now they had come up with this cunning wheeze. They were offering runners who had bought from them in the past a chance to receive the entire collection of images taken during their run, in all their formats, for only £7.95. My offer was for the Oxford half-marathon in October 2016 and the Edinburgh marathon in April 2014. True I had virtually all the images already but the offer also included, in both instances, a personal video of the race. That was no surprise for the Oxford half-marathon; I had that one already. But what was this personal video of my Edinburgh run? There had never been one for sale at the time, surely. I would have bought it!

I paid my money and opened my download with breath suspended yesterday evening. Oh my, oh my, oh my. There will be others out there who have had their past life rendered before them through
unknown or forgotten film footage but this was a first for me.

I have had to watch it several times already to confirm my realisation that the narrative I had woven of the finish was not indeed the case. My still photographs, arranged in their display frame with the medal at the centre, include a sequence of three that show the young Kirsty racing up to my shoulder in the finishing stretch and passing me. She had become my metaphor for the triumph of youth and the natural order of the world. Only now the video footage reveals that I responded and overtook her, albeit with wobbly legs and frame. 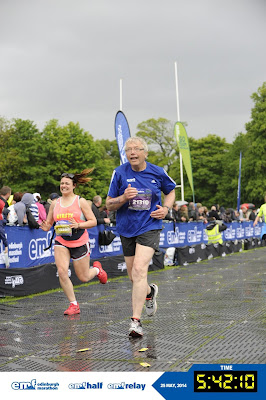 I had forgotten completely - as I had much of the rain and the gloom and the moor and the sea. The gods have blessed me. 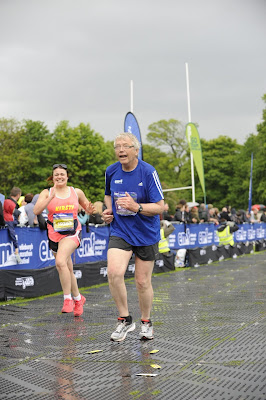 So this post was intended as my opportunity to share my joy in being gifted this weird time-capsule event. Unfortunately, I have belatedly discovered that with a size of 150 MB my video file is too large to transfer to this blogpost through the normal channel and I do not have the technical skills to solve my problem. Still it seems a shame to waste the story - and if any of you readers would like to see the video just email me on robdonovan@waitrose.com and I will drop it into your mailbox. 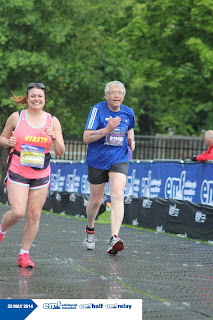 It is also an opportunity to say a little more about the importance of Edinburgh in my life. It was here, north of the border, that I became a socialist. The year was 1965. The occasion was a Dartford grammar school summer vacation walking excursion to Northumberland. Unfortunately for our masters, David Patterson and Lee Hutchinson, foot and mouth was diagnosed in the county just before we arrived. Emergency plans were concocted; there would be no walking as planned. And that is how we found ourselves on a coach to Edinburgh and how Lee was able to take a group of volunteers to see the slum courts of the city. He made a point of identifying, correctly or otherwise, the human faeces that lay in a doorway. At some point that day I made a solemn blood pledge with myself to renounce the Conservatism of my parents and take up the cause of the marginalised and oppressed. I had been leaning that way for a very long time - I think ever since the shed door was shut to exclude the robin that had built its nest there. The nest was removed. I wept. This was seriously unfair. I was around six years old.

A final word or two about Edinburgh 2014. Rather like London in 2019, I was so nearly not there. As part of my marathon preparation for this Scottish event at the end of May, I had entered a half-marathon in Falmouth at the end of March, here in Cornwall. That proved to be the most gruelling race of my running life. I managed seven of the fourteen hills still running before I was compelled to walk the remaining ascents. My finishing time was 02:49:53. A year later I ran the flat Bungay half-marathon in 02:35:04 despite still being a little jet-lagged from the return from two weeks on Patmos, the holy island in the Aegean. But Falmouth was not just demanding; it was also the occasion of my viral infection with norovirus.

It might have been fingers on a plastic cup for the water given to runners. Who knows how the virus was transmitted. What I do recall is the vomiting and the nausea. My stomach had not fully recovered by the time I was travelling north by train two months later. And what was worse, my back had gone again a month before the race. Thank goodness, I had Ben, my trusted physio, working on my body all through this period but as I gently walked the streets of Edinburgh the day before the race I was uncertain of my capacity either to start the race or finish.

It was no surprise to find my running legs gave way after 8.5 miles. It was more of a revelation when I found that I could switch them back on again for quite long periods for the remaining 17.6 miles. I finished in 05:42:10, only one minute and fifteen seconds slower than the time for my first marathon - London 2012 - when I ran for sixteen miles before having to switch to walking and running.  Five years later, in the London 2019 marathon, I no longer had that facility - and finished in 06:28:40 after my running legs collapsed after 8.5 miles. 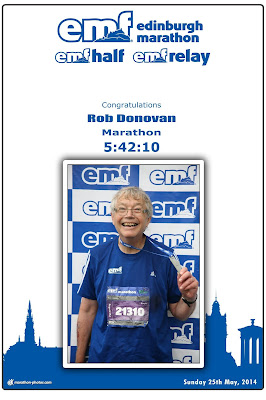 Edinburgh was a bit of a triumph then - and I raised around £1,200 for the KidzRUs theatre here in St Ives. And now it has just got even better, knowing that I kicked back successfully after being overtaken!