In the pages of The Road to Corbyn (2016), I nailed Boris Johnson when he was still the Mayor of London. I'm having another go now. Video evidence emerged at the beginning of this week from the Labour Party campaign headquarters. Boris Johnson is seen delivering a speech and the key quote from the oration is headlined:

You can see this video when you tap into my Timeline on Facebook or access my Facebook 'The Road to Corbyn' page. I find the contents of Johnson's speech vile but it is important to hear and see it being delivered to get a better measure of the man. He made what he would consider his oration in 2013 when Mayor of London.

Here is a transcript - with some commentary from me:

[Where did that figure come from!?! - Back in 1976, I married Louise in July knowing that I would be going back to university in September - to Manchester to study for a M.Ed. in Curriculum Studies; an opportunity to engage for the first time with the disciplines of psychology, sociology and
philosophy at degree level. In preparation, I immersed myself for much of August in the library of the National Foundation for Educational Research in Slough, the town where I had served for five years as a secondary modern school teacher. My research interest became IQ as a historical construct and its uses and abuses; I was thrilled when I worked out that Francis Galton's research was founded on blatant misuse of statistics. Not long after, he was exposed more fully in the world of academia. This mattered to me. I had been diagnosed as a likely candidate for special education when I was five; my parents resisted and I went to a state primary school; I remember very little indeed about those first two years before Junior School where I did begin at last to learn to read and write; I scrapped into Grammar School with such low self-confidence; I got lucky with teachers and by the 6th Form was being prepared for the Oxford entrance exam which I passed, securing a Scholarship. I have spent my life resisting false constructs and labels such as IQ that are used by the wealthy and powerful to further their own interests.]


"Britain is competing in an increasingly impatient and globalised economy in which the competition is getting ever stiffer and no one can ignore the harshness of that competition or the inequality that it inevitably accentuates and I'm afraid that violent economic centrifuge is operating on human beings who are already very far from equal in raw ability if not in spiritual worth.

[No! This is Eton debating society rhetoric; or the ammunition in a class war that I take it to be.]

"Whatever you may think of the value of IQ tests it is surely relevant to a conversation about equality that as many as 16% of our species have an IQ below 85. While about 2% have ...

Johnson pauses and then asks a question:

Every speech has to have a joke in Johnson's mind. How vile the humour! How dubious the man.

And the harder you shake the pack the easier it will be for some cornflakes to get to the top and for one reason or another, boardroom greed - or as people in the boardrooms assure me the natural and God-given talents of senior executives - the income gap between the top cornflakes and the bottom cornflakes is getting wider than ever.

And I stress I don't believe that economic equality is possible. Indeed some measure of inequality is essential for the spirit of envy and keeping up with the Joneses and so on. That is a valuable spur to economic activity."

There you have it: the underlying world view of a frightened and insecure man who wants to hang on to his wealth and power and privilege. Keep the 'oiks' in their place by defining them as 'thickheads' who have a natural and God-given place in the natural order. At the bottom.

In my online trawling, I found this admirable article - my debt is to Steven Harkins of the University of Sheffield for this very useful guide to the abuse of biology in justifying inequalities over the last century and a half:


Steven Harkins, Boris Johnson and the Victorian elite: Why Inequality is always fair at the top


"Boris Johnson, Mayor of London, was recently criticised for his remarks on the importance of IQ tests and their relevance to equality. Delivering the annual Margaret Thatcher lecture, Johnson said ‘It is surely relevant to a conversation about equality that as many as 16% of our species have an IQ below 85 and 2% have an IQ above 130’. The Mayor of London’s remarks resurrected a discourse about poverty and inequality that was developed by the intellectuals of Victorian Britain.


The vast inequality of the British Empire was justified by Victorian intellectuals through discourses of cultural superiority. One of the guiding principles of this ideology was the dichotomy between white ‘civilised’ Europeans, and non-European ‘savages’ (Peters 2013:10-11). The advancement of scientific knowledge throughout the Victorian period led to these discourses morphing from cultural to biological justifications of inequality and race. The application of biology to the subject of inequality lent a pseudo-scientific justification to the absence of social justice throughout the British Empire. A variation of these discourses was also used to justify poverty and inequality within the UK. Shortly after the publication of Charles Darwin’s Origin of Species (1859), Herbert Spencer published his book principles of Biology (1864), where he coined the term ‘survival of the fittest’. Spencer was hugely popular and widely read in the late 19th Century and he was ‘instrumental in popularising the term “evolution” in its modern sense’ (Hawkins 1997:82). Even before Darwin’s seminal text was published, Spencer had argued that ‘under the natural order of things society is constantly excreting its unhealthy, imbecile, slow, vacillating, faithless, members’, through what he describes as a ‘purifying process’ (Spencer, 1851:323-4). Spencer was a key figure in developing what was to become known as ‘social Darwinism’. Francis Galton, the pioneer of the Eugenic movement, echoed Spencer’s conclusions in a letter to Charles Darwin, his cousin, Galton described how natural selection ‘seems to me to spoil and not enhance our breed’ (Hodge and Radick, 2003: 217). In order to stop them from having children, Galton argued that ‘the weak could find a welcome and a refuge in celibate monasteries or sisterhoods’. These discourses of biological inferiority served as elite justifications for the high levels of inequality that existed in Victorian Britain.

Having fallen out of favour for decades, these discourses were resurrected to coincide with the sharp rise in inequality from 1974 onwards. It was in 1974 that Keith Joseph argued that ‘our human stock is threatened’ by mothers ‘in social classes 4 and 5’ having children. Joseph said that:
‘Many of these girls are unmarried, many are deserted or divorced or soon will be. Some are of low intelligence, most of low educational attainment’.
As inequality started to rise sharply in the UK and the US, so did justifications from intellectuals as to why this growing inequality was fair. Charles Murray rose to prominence in the US and UK in the 1990s, he argued that welfare cuts in the United States were necessary in order to stop ‘encouraging the wrong women’ from having children (Herrnstein and Murray 1994:548). According to Murray, social welfare programs designed to help the poor, who have disproportionately low IQ scores, are disastrous for the United States. Murray turned his attentions to the UK in the 1990s and found that, just like in the United States, the UK had a problem with a growing underclass. These arguments influence contemporary policymaking in the UK, when Iain Duncan Smith explained his vision for the Centre for Social Justice in 2005 he cited Charles Murray’s work.


According to Danny Dorling, Boris Johnson’s justifications for inequality reflect the view that ‘those at the top believe that just a few are capable of leading us all. It is a view that makes sense of their lives’. It also makes the case that the vast wealth inequality in the United Kingdom is not the result of injustice but the result of biology or some other natural process. Johnson is unlikely to bring up the subject again, following the results of his latest IQ test, however these discourses will continue to be resurrected as long as those who benefit from vast economic inequality seek to justify its fairness to those who do not."

J0hnson is part of a self-serving bunch of really rather nasty members of our species. Shame on them. 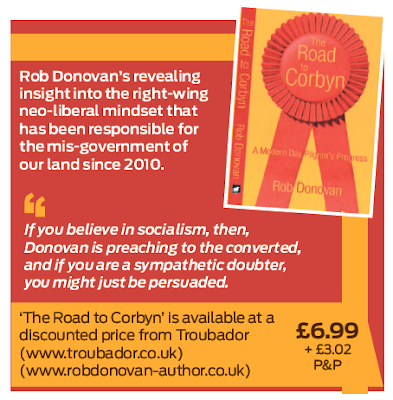 I first nailed Johnson back in 2013 when I was researching to find my own explanation for what was happening in the social and political world, post the Global Financial Crash of 2008. Eventually, my findings were woven together in a reworking of Bunyan's 'The Pilgrim's Progress' that I called 'Deception' and was complete by early 2015. When Cameron was returned to 10 Downing Street and Jeremy Corbyn was elected the new leader of the Labour Party later in 2015, I added two chapters and published the book under the title 'The Road to Corbyn' (2016) - TRTC (2016).

I nailed him then. The day before my prophetic book is vindicated, I am waving the hammer again. 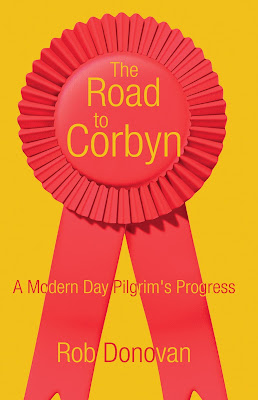 Copies of TRTC (2016) - signed or otherwise - are available directly from me for around a tenner using this website link:  press here
www.robdonovan-author.co.uk/TheRoadToCorbyn.html