ANOTHER SIGHTING OF JAGO STONE - THE VINES HOUSE PAINTING

By now, those of you who are regular readers of my Jago Stone blog-posts - I've published 46 since January 2016 when my website and blogspot were first developed by Steve McIntosh (press this link here for the full list) - will recognise the pattern. An email arrives in my inbox with a title that includes Jago Stone's name. I open it - and wonder upon wonder, the spirit of Jago now appears. I have a story and often an image, usually of a family home that he painted at some time during his precious years of liberty from the cell block. And thus, out-of-the-blue, a stranger makes contact with me, having had a connection of some sort with Jago Stone the artist (1928-88). For whatever reason he or she has reached for the Google button and typed in Jago Stone - and found me: his biographer. My privilege. I am a fortunate to be the recipient of such material, a treasure-trove that helps bring Jago Stone back to life.

It was David Mitchell who emailed me last Wednesday afternoon.

'I've just been googling Jago Stone and came across your blog. I have a painting by Jago that he painted in 1973, of my parent's house. My mother was very suspicious of him, and would not let me go and see what he was doing on my own (I was 9)'.


Young David, however, must have secured a supervised visit because in a later email this week he wrote: 'I …. so clearly remember looking over his shoulder at his painting'. Lucky David; he has a memory for life of being that close to the extraordinary gypsy artist. Mother, though, sensed that

there was a story behind the charisma of the artist working his magic on the canvas that would soon adorn a wall in her house. And she was not wrong.

Two years or so later, David's parents saw a newspaper story that revealed to them for the first time the fact that he had been a burglar. By now, the painting was hanging in the front hall of Vines House, the family home. In David's words, 'I think my parents always loved the painting, especially after they found out the story about Jago'. The newspaper cutting was taped to the back of the picture. 'When my mother died in 2002, I took it and it now hangs in my living room as a reminder of the house I grew up in.'

Fast forward to 2019 and David is offering me images of both the painting and the cutting. Lucky Rob!

David's family home in his childhood - Vines House - is in Grittenham, near Wootton Bassett in Wiltshire. Jago had an eye for the home that would be a delight to paint. As I discovered from my own Google search, Vines House is a Grade II listed building with a C17th core and C18th reordering (the porch has an inscription dated 1726), together with additions and alterations over the next centuries. It is reputed to have served as a Moravian Church and John Wesley is thought to have preached there. Here is Jago's painting of the family home:

And here are two images from the Mitchell family photo archive that depict the house in its grounds. David Mitchell has been very kind and so helpful. In the course of our email exchanges, he  explained that he had 'looked out a couple of photos from my father's collection. One taken from the road, and the other from the top of the drive'.

David continued, 'That's my mother in the photo. It was taken in about 1969. Jago (in 1973) set up his easel just up the drive from the nearest straddle stone'.

And so to the back of the picture and the taped newspaper cutting from 1975. When I looked for the first time at the images I had been sent, I realised that this was an article I had never seen before. In essence, it is truthful but there are some moments of exaggeration and rewriting history:

'Audacious ex-convict turned artist and author Jago Stone is looking for a quiet Cotswold cottage to follow the straight and narrow.
He is the man who, disguised as a monk, stole church silver worth £150,000 before landing himself with a 15-year jail sentence [10 years, in fact, of which he served 7 years].
And now that he has broken into the literary world, with the publication of his first book, 'The Burglar's Bedside Companion' on Tuesday, he (intends) to continue the crime-free path he has trodden for eight years.
"There is no point in going back to crime now. I do not need to." he told me as he sipped a whisky in a Tewkesbury hotel yesterday.
Jago, now 45 [47], and born into a Quaker family in Yorkshire [into a Quaker family in Aldridge, a Birmingham suburb, in fact - and Jago's birth took place in Kingston-upon-Thames, Surrey for reasons that are explained in his biography] claims to have been a juvenile delinquent since he was 11.
He committed his first crime when he was 18, followed by 97 more until his conviction for sacrilege and stealing two years latest (sic) involving church silver from all over the country. [For the story of his early years as a criminal, see his forthcoming biography.]
His irreverent book recounts his criminal exploits in a somewhat tongue-in-cheek manner.
"I suppose I am completely amoral. But that does not stop me from being invited to lecture organisations like Women's Institutes, Round Tables, and magistrates associations on whether there really is a need for prisons," he said.
"Compulsory social work would have a much more beneficial effect on prisoners then just shutting them away."
Jago has been confined in about 30 [?!?] prisons, including Horfield, in Bristol, and Gloucester.
He learned to paint in prison [he was painting and drawing before he was sent to prison], and since his release, has made quite a name for himself, having held exhibitions in London and elsewhere.
He lived for two years in Barden Manor, near Watchet, Somerset, reputed to be Britain's most haunted house, and has painted what he claimed was one of the ghosts there.
He has dedicated his book with characteristic …… [audacity? The dedication is: To the Thames Valley police who were wrong - again.]


And now the whole cutting - with the portrait of Jago, a glass in one hand and his autobiography in the other: 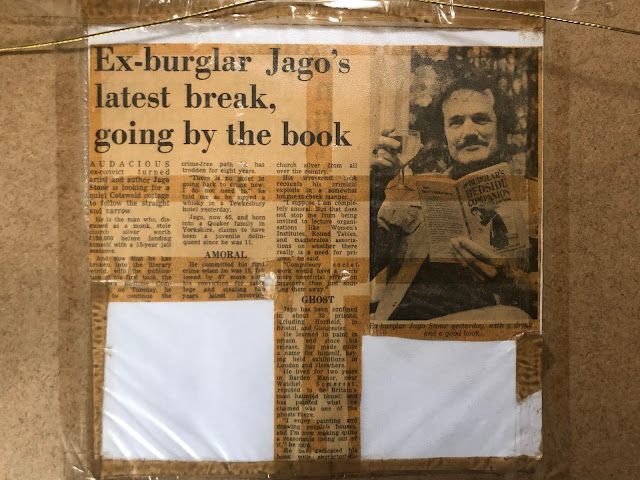 A little Wiltshire context would not come amiss, at this point.


In Chapter Eight, 'Jago's English Circuit', of my biography of Jago Stone, I detail the Wiltshire connection that emerged in 2017 through the emails I received. Jago's home base in 2013 was Hellidon in Northamptonshire but he was the gypsy artist with a car. It would have taken him just over an hour and a half to travel the 64 or so miles, speeding along the A429 - an agreeable journey to pastures fresh across the Wiltshire border. Alastair Mould and Martin Carter told me of Jago's time painting in Ashton Keynes in north Wiltshire; Louise Ellis explained that her parent's had commissioned a work from Jago: a painting of their home, Yew Tree House, in Lea, near Malmesbury, fifteen minutes drive from Ashton Keynes. Yew Tree House is eleven minutes away from Grittenham and Vines House.

Jago was truly the gypsy artist in search of a good home - albeit one to capture on canvas, not to settle down and live in for good.

One final twist to this story in David's words:

'Last year, my neighbours were away and they had a house/dog sitter. He introduced himself as Jago. I remarked that it was an unusual name and that I'd only come across it once before. "Yes", he said. "My grandfather became friendly with an artist who painted their house. I was named after him."
Posted by ROB DONOVAN at 09:47