Another handful of appreciative and interested attendees - and another enjoyable and stimulating experience for me. My talk today was on 'Drink in Victorian Norwich', the title of my doctoral thesis that was successfully completed in 2003 after seven years of part-time study at the University of East Anglia. As I explained to Wendy Radford, Al Britt and John Cynddylan - and Peter Fox and Roselyne Williams, the co-directors, listening as they carried on with Gallery work - it had been a working man's life journal that began my enterprise. That man was the great grand-father I never knew. He died a dozen years before I was born but he left his journal to his family and in the last years of my mum's life - around 1993 - she passed it on to me.

A man's life in thirty or so pages and as I read through the tales of Grandad E.F. Enston's life I realised how trusted he had been in his community. He was the keeper of funds at numbers of drinking places - lodges and pubs and clubs. He the manager of all the pennies his working-class chums had saved for the precious holidays and outings that brought some highlights into the tedium and harshness of workers' lives in Canterbury, Kent. We are not that far away, here in my imagination, a few miles from the Kentish coast in the 1910s and 1920s, from the Sussex coastal

town of Hastings where Robert Noonan worked in the building trade in the 1900s - and wrote the socialist classic: 'The Ragged Trousered Philanthropists'. And I began to think about the role of drink in working-class communities and the importance of the drinking place.

When my mum died peacefully in 1995, my journeys up north to Leyland to see her came to an end. I began to look for a new adventure. I knew it would be a writing enterprise but was unsure initially what form it would take. Serendipity took over and within a few months I had been accepted at my nearest university - the University of East Anglia in Norwich - to undertake doctoral research into the role of drink within working-class communities in Norwich. My supervisor - Professor Richard Wilson - has co-authored the definitive Cambridge History of Brewing a couple of years before. And Norwich had more pubs per head of population in the Victorian era than any other urban centre.

In 2003, I was awarded my doctorate, the fruit of eight years of research and writing - a wonderful adventure. I think the conclusions of that research are important and here in this blog-post I present them afresh. As ever, I welcome feedback:


CONCLUSION to 'DRINK IN VICTORIAN NORWICH' by Rob Donovan

(Press here for a link to the thesis)

Victorian social cohesion depended to a significant degree on drink. Those who held
power, within Norwich and elsewhere, were able to use working-class dependence on the
consumption of beer to maintain social order and control. In Norwich and other urban
centres, one consequence of urban growth in the nineteenth century was the expansion in
the supply of alcoholic drink to satisfy the needs of this enlarged population. The drinking
place was a social necessity that became ever more important. If the Victorian period can
be seen as a time of consolidation when a social order was developed appropriate to an
urban, industrial, capitalist society, then this process was itself dependent, to some degree,
on the addiction of the majority of the population to society’s legal drug, alcohol.

The working classes needed their public houses and beerhouses. They made their meaning
in life in response to poverty, lack of education, and unhealthy living and working
conditions. Inadequate sanitation and water supply problems meant that beer answered a
dietary need for a liquid that was safe to drink in a society where an alternative such as tea
only became affordable and acceptable to increasing numbers later in the century.
Depressant comfort came directly from their consumption of alcoholic drink. The
ambience of their drinking places brought further social comforts. In Norwich, as in
Bradford, Portsmouth, London and other urban centres, most social and political functions
were connected with the public house. It served as a recreation centre, a meeting place, and
sometimes as a transport centre. Its social role remained significant throughout the late
Victorian period even as changes in transport and diversification of leisure-interests began
to broaden working-class horizons. The ‘local’ was a key social institution. Most public
houses in Norwich experienced sufficiently long periods of publican stability to have
played an important role in the development of working-class communities.


The drinking place remained the main leisure-time location for the working classes in part
because the rate of urban growth in industrial Britain produced a complex nineteenth
century housing problem that remained intractable. The public houses and beerhouses
provided both public spaces when these were unavailable elsewhere, and relief from the
squalor of rented accommodation. In these circumstances, Victorian social cohesion
depended perhaps as much on the supply and consumption of beer as the legislative
measures passed at Westminster or agreed within city councils.

Social cohesion was also helped by the key political role that drink and the drinking place
played for much of the period. In Norwich, as elsewhere, sections of the urban elite used
the working-class dependence on drink to their own political advantage at election time
through bribery, treating, and the control of organised gangs of ‘roughs’. These traditional
practices appeared corrupt to those seeking reform but they were difficult to eradicate as is
indicated by the two Royal Commissioners’ Reports on electoral malpractice in Norwich in
the 1870s.

Social cohesion depended on effective interfaces between the urban elite and the working-
class majority, and the drinking place and its regulation served a vital role in this respect.
Such an overview of drink, drinking, and drinkers by the elite citizens of Norwich was an
exercise in social control. In fact, there was little overt interference with the infrastructure
of drinking. Although Norwich had the highest density of drinking places to population in
England, the urban elite in the 1870s was proud that the city could boast the lowest rate of
drunkenness. Those who held power could congratulate themselves on their increasing
control over the drinking habits of both the working-class majority and the working-class
members of the police that the elite had set up as an agency of social control.

The infrastructure of drinking in Norwich was effective not least because brewers were key
members of the urban elite and had influential roles within the Watch Committee, the
employer of the Police Force, and other local government committees. Members of
particular brewing families felt called by a sense of duty and business acumen to involve
themselves in the polity of Norwich. Their insistence on the values of deference and
conservatism reinforced the social control exercised by the elite and so further deepened
the social cohesion that had been in part developed by the consumption of the beer they
brewed and the attractions of the drinking houses they supplied and owned.


Yet there were splits within the elite over the issue of drink. Commanded to show love and
compassion for their neighbour by the teachings of the Christian faith and yet concerned to
increase their own and the nation’s wealth, those who had wealth and power argued and
divided. The Temperance Movement developed as a consequence of the challenge to
traditional Christian ethics presented by the excessive consumption of drink in this new
industrial and urban context. For many supporters of Temperance, the sin of excessive
drinking provided the explanation for the poverty and lack of virtue they identified within
the working class. By 1901, Norwich - like other urban areas - was becoming a more
sober, compassionate and just society. But this was not due to the victory of Temperance
but rather to a shift in the ‘structure of feeling’ that saw a wider sense of social
responsibility, shaped by the traditional Christian ethic of care for those in need, becoming
more acceptable within the ranks of the elite. Solutions to poverty and disease were now
seen in terms of municipal and state schemes for improvements in living conditions and
health. A measure of redistribution of wealth was regarded as appropriate.

These are the conclusions of this historical study that has been concerned to incorporate an
important lesson of the ‘new cultural history’: the need to keep the focus on how people
actually put together and made sense of what they were experiencing. I have avoided
explanations that depend on conceptual structures that are too rigid and therefore lacking in
subtlety and depth. The use of sources such as the local press, the surviving minutes books
of local government committees, licensed victuallers’ registers and decennial census
returns, has helped develop insights into understanding the role of drink in Victorian
Norwich in particular and the process of social transformation in the Victorian world in
general.

Asa Briggs, in the 1950s, argued that English Victorian cities ‘responded differently to the
urban problems which they shared in common’. Further research centred on the role of
drink in urban centres will help establish whether, and in what circumstances and to what
degree, Norwich was different from  - or similar to - other urban centres in its response to
the issue of drink. The argument of this thesis is that drink was a means of developing and
maintaining social cohesion not only in Norwich but also in other cities and towns.
Whatever the differences between municipalities in their responses to urban growth and the
development of working-class communities, the drinking habits of the working class
provided an opportunity for social control and policing that was common to all urban
elites. More research can establish the extent to which advantage was taken of this
opening. It can also help answer such questions as how typical was either the involvement
of Norwich brewers in urban politics or the mutual Christian respect of some Norwich
Temperance leaders and brewers for each other. In Liverpool, the antagonism between
temperance and drink interests was more marked but it seems unlikely to have affected the
role of drink as an agency for social cohesion and therefore as a vital element in the
process of social transformation in the Victorian world.


One more image from the talk by way of a conclusion to the post: 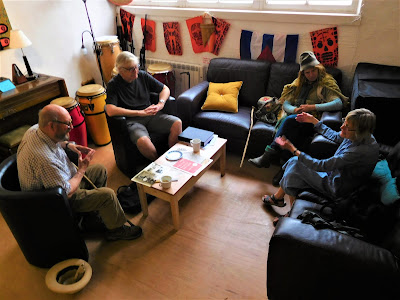