ROB DONOVAN AND THE ST IVES RUNNING CIRCUIT - UP THE HILL

This blog gives me the opportunity to share some of the thoughts and feelings that I experience on my local training run. Today, I set out for a run with a difference knowing that it would be a record slow time. In fact it was 49 minutes; usually it takes from around 34 to 37 minutes depending on my fitness and the wind and the time of year ... and so on, by way of excuses. But I was clutching my camera in the palm of my hand and I had previously thought through my stopping places for camera shots. A cold and bright December day - the first of the month - a brilliant backcloth.

First stop, up the steep Stennack hill, to look across to the wooded area on the left just past the fire station and the Leach Pottery. Through the trees, in your imagination, to a bustling mining landscape 180 or so years ago. This is the site of St Ives Consols, developed on a large scale by James Halse in the 1820s and 1830s. The mine that made him a fortune - tin was selling at £35 per ton around 1810 and increased in value still further in later decades - contained some large and unusual ore formations known as 'carbonas', which when excavated, produced large caverns, whose roofs had to be supported by massive timbers. In April 1843 a workman's lighted candle stuck against a beam in the fabulously rich 'Great Carbona' and caused a disastrous fire which burned for six weeks, destroying that section of the mine. The mine closed in 1875 but some work continued in the upper levels after that. Total recorded returns - 1827-1892 - were recorded at £1,024,467, with tin production during this period amounting to 16,400 tons.

None of those miners would have lived to the age I am now. The mine owner and the share-holders most probably did.


We've reached the junction at the top of the Stennack hill. Bear left for the A30 connection into Penzance. Carry on to the right taking the B3306, the coastal road to St Just twelve miles away. The hill continues upwards to the car parking lay-by at the summit, known as Little Trevalgan. I reckon it's about  a mile and three-quarters from our home to this Little Trevalgan turning-around point on my circuit.

A hundred yards further on and I've reached the entrance to Hellesveor farm and hamlet. The slurry smell is breath-taking - the poor farmer lost stock during calving a couple of years ago to a virus that most likely came from dog poo. Our Ella was not to blame but her old running circuit has had to be shortened. Now I look for the rhythm that will see me continue gently upwards to Little Trevalgan.

I can begin to see the hill that carries that name up on the horizon in the distance. In 1964, the St Ives artist, Peter Lanyon, aged 46, crashed into that hillside in a gliding accident and died later in a Taunton hospital. He had taken up gliding five years earlier in order to "get a more complete knowledge of the landscape". His movement through abstract expressionism, and particular absorption in the Cornish landscape, made him one of the most important talents in post-war Britain. 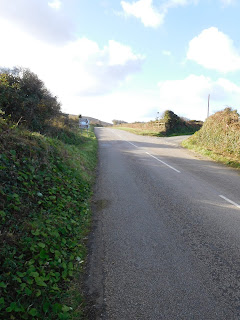 The mechanical hedger is responsible for my breath being taken away a second time - this time
by the sweetness of the fragrance from fresh-cut wood. The steepness of this hill is a constant reminder of the importance of breath control for a runner.

I've reached the summit. There's been, as always, a determined effort to reach the top of the hill. I've been so absorbed in the effort, I've forgotten to take any more pictures! The last five minutes of running has the steepest gradients in the training exercise. This view from the summit, with its glimpse of the sea again, is magnificent. And now there is the delight of turning around and running downhill. Just a moment of mental pause to reflect on the fact that when I'm fitter I do this circuit three times: 36 minutes; 37 minutes; 38 minutes - a total continuous running time of 1 hour 51 minutes.

Tomorrow, I'll take you back down.

Correction - made on Monday 4 December:

Just by chance, I was reading David Whittaker's book 'W.S. Graham & Cornwall' this morning and came across the fact that Peter Lanyon's tragic gliding accident did not happen at Little Trevalgan - although there is a memorial plaque there - but at Dunkeswell aerodrome in Devon. Surviving the accident he was confined to bed in the Taunton hospital with a cracked vertebra and died, without warning, four days later from a blood clot. Apologies for the error.