As each week goes past and fresh discoveries emerge from the online search for the identity of Jago Stone as a character and as an artist, I feel more and more excited as his biographer. My gut academic instinct that this style of research would pay rich dividends has been fully vindicated. I remember with pleasure the excitement of my research discoveries during the years from 1995-2003 spent exploring the subject of Drink in Victorian Norwich for my Ph.D. Now with the subject as Jago Stone and his times there is fresh delight in being the historian and practising the skills of this profession.

Using the material that comes to light, together with the detail that can be taken as fact already, the historian makes an interpretation of the past. That is what I am doing. My subject matter is not just Jago Stone. His 20th century world in all its complexity and change is a critical part of my focus. To understand Jago, make sense of the social  worlds he inhabited. And always remember the prerequisite of the good historian is the capacity for empathy.

And so to a day in 2017 - last Thursday, in fact, the 16th of February. The day of my appointment at the British Library in London. The British Library opens at 9.30 am. Here is a photo I took of the queue ahead of me shortly after I joined it at 9.15. By 9.32 when the doors opened, the queue had increased nearly ten-fold and snaked around the piazza outside.

By 10.10 am I had completed my full registration and was sitting in a listening booth ready for the first of the three twenty minute plays of the item I had travelled overnight from Cornwall to hear. My four and a half hours inside the booth gave me the opportunity to make a full transcript of


the programme in which I had discovered Jago featured. Thanks to staff at the British Library, a copy had been located - no mean feat in itself after all these years. Not until 1999 was there automatic retention of all aired material.

What did I learn about Jago?  Below is part of the transcript I made. If you have read 'The Burglar's Bedside Companion' - Jago's autobiography that was published in 1975 - much of this will be familiar to you already. But many of you won't have done so. Certainly all can appreciate a tale well told with a distinctive wit and sense of humour. How far all that follows is actually true is another matter. My biography will be offering a judgement on that question. Much of it will be the case - but not all. Jago needed his masks and his myths.

Part of the transcript of 'The Gaolbird' in the series 'It Takes All Sorts' - Jago Stone is talking to St John Howell about his life  as a crook and how he learned to paint while 'inside'. First broadcast on BBC Radio 4 on Tuesday 8 June 1971 between 14.40 and 15.00, Jago was then aged 42 and had spent fifteen years behind bars between the ages of 18 and 38.

(Jago) Yes indeed. I worked alone – no one else influenced me. My family tried to explain it all by saying that I had come under the influence of loutish people making me what I wasn’t. But that’s not right. I was a thief from a very age and I just went from strength to strength. I stole and made money by selling what I stole and then when the money ran out I needed to steal again. In an amusing way, it had become an economic necessity. I couldn’t do anything else. I had no qualifications, no skills. I had failed at school. I was almost illiterate. I would pinch and then run away from school. Social workers said they couldn’t understand what made me do these things. I was a recidivist.


I spent a not very profitable twenty years in and out of prison, fifteen years behind bars. Why? Because I had the old almost psychopathic thing – a condition. I got an immediate, compulsive satisfaction from stealing – the nice shiny bright things.


(St John Howell)  And the silver and porcelain marks?


(Jago) I got a knowledge of silver and porcelain marks – I studied them in prison, in the iron room where I was safe. But I was not a house breaker. My forages were into institutions – institutions not people. If I had had the chance to do the Inland Revenue, I’d have robbed the lot. But robbing someone of their own property is violating them. I see myself, if you like, as a latter-day Robin Hood. Very foolishly. Very romantically.

(St John Howell)  Did  you find particular satisfactions in any one job?


(Jago) The Bishopthorpe job - when I robbed the Archbishop’s Palace at York. I was dressed as a Franciscan friar. I decided I had a certain histrionic gift. I dressed in the full cassock and hood – three knots in the rope – for chastity, obedience and poverty – and a shaved crown. I got in. And I got the old silver. Unfortunately, my fence got himself arrested a few days before – and I ended up taking the haul to sell it straight. To a Jewish silver dealer in Leeds who was not impressed by my Franciscan outfit and became very suspicious. And I got nicked.


But I didn’t rob the bishop! His stipend didn’t decrease. The judge asked me ‘Why did you rob the Bishop?’ and I quoted Matthew who wrote that Jesus warned: ‘Lay not up for yourselves treasures upon earth, where moth and rust do corrupt, and where thieves break through and steal: for where your treasure is, there will your heart be also.’ The old man wasn’t impressed by that though and I got ten years.


(St John Howell)  Did you do  other jobs in disguise?


(Jago)  Yes – I was a reporter from the Manchester Guardian but that didn’t need much disguise – just a liberal attitude. And I was a 2nd lieutenant in the Army Medical Corps. And a monk, twice - the only occasions when I’ve really disguised myself. When you’ve got thirty warrants for you across different counties – well, I didn’t wear gloves, I wasn’t particularly professional – I knew I was going to be caught. But taking different names and different identities and evading them for as long as possible was part of the fun.


The fact is that if you have the right accent and the right approach you’ll be believed. People believe anything – people believe what they read in the newspapers. People believe the government. If you repeat it often enough and convincingly enough, people will believe you. I was Dr Benson when I signed the hotel register - very satisfying – just trust and hope to hell that no one had a heart attack. And then there was the time I became the Rev. Charles Newcombe – indeed, I was Father Newcombe on the charge sheet. I refused to accept any other name when charged. I had stolen as Father Newcombe; I would be charged as Father Newcombe.


I remember once when I did a large antiques establishment. I had my eye on four or five pieces of silver in a display cabinet. I was standing on the display mat when the alarm went off, going like mad. There I was in my monk’s habit and under the habit my belt with the 18’’ case opener.  I smashed the cabinet open and stuffed the chalices into my bag – a last sacrament bag – and hopped out of the window. I dropped down onto the pavement only to see the two headlights of a car approaching me down the road. It was the police – the hurry-up wagon. A head appeared out of the window of the police car. ‘Excuse me, Father. Have you seen anyone about?’ ‘I’m terribly sorry, I can’t stay’, I replied. ‘I’m on the way to see a dying parishioner – but I think I saw skulking over there, in that direction.’ The police car reversed in the direction I pointed and was never seen again – and I went the other way.


(St John Howell)   What was it like inside? Could you find humour there?


(Jago)  I’m just writing a book called ‘It’s Funny Inside’ – I’m working with someone else on it. The fact is that you need to forget about the outside world – and accept your part. If you accept it – accept your lot – totally rejecting any self-pity – you can end up enjoying your time, surprisingly. But if you don’t, you’ll end up neurotic. Prison was my life and my home and I accepted it.

To conclude this Jago blog,  another picture of a painting that Jago produced in 1973. This one is of a family home in Ashton Keynes in Wiltshire, only sixteen minutes drive away from the Lea home of Louise Ellis and  her parents. My source this time is Alastair Mould who also emailed in January this year to say he was about nine years old when Jago painted his parent's home, Park  House. Alastair still has the painting and kindly sent me this picture. He did so after reading Louise Donovan's (my wife's) experience of Jago wandering up the driveway and painting her parent's house in 1969 - see the Jago gallery on my website using this link. 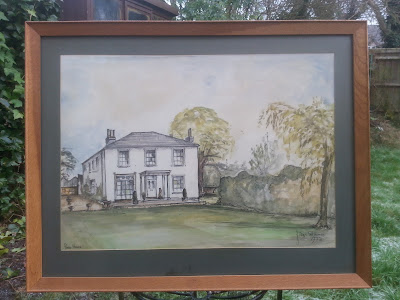