CELEBRITY CULTURE, KIM KARDASHIAN - AND THE DEATH OF LOCAL COMMUNITIES

An unlikely pairing at first glance. Imagine a Christmas cracker riddle: 'What links the cult of celebrity, Kim Kardashian, and the death of local communities?' Read on for an answer shaped by my most recent newspaper and journal trawling.

George Monbiot is my first key source. Writing in 'The Guardian' just before Christmas (21.12.2016), his piece is headlined: 'Celebrity is the smiling face of the corporate machine'. I think the case he advances is powerful and telling - and the statistics he uses are for me so alarming.

An attachment to celebrity has become the dominant value among little children in the US. A study published in the journal Cyberpsychology reveals that an extraordinary shift appears to have taken place between 1997 and 2007 in the US. In 1997, the dominant values (as judged by an adult audience) expressed by the shows most popular among nine-to 11 year olds were community feeling, followed by benevolence. Fame came 15th  out of the 16 values tested. Watch American films now on daytime TV here in the UK and you'll get a flavour of what that means - the 'feel-good' triumph of decency over adversity with the shared values of families in small town communities in the end winning out. Mythic tales but in their own way ennobling and with a long pedigree taking in James Stewart's portrayal of courage in adversity (with some angelic assistance) in Frank Capra's 'It's a Wonderful Life' (1946) and going, I suspect, right back to the very origin of the film medium. But by 2007, fame had shot to the no.1 position, followed by achievement, image, popularity and financial success. Community feeling had fallen to 11th, benevolence to 12th.

Monbiot cites a paper in the International Journal of  Cultural Studies (IJCS) which found that among the people it surveyed in the UK those who follow celebrity gossip most closely are three times less likely than people interested in other forms of news to be involved  in local organisations and half as likely to volunteer.

A recent survey of 16-year-olds in the UK indicated that 54% of them intended to become celebrities.

As they say, at the end of the day, it's not rocket science. Follow the yellow-brick Ofsted-ed road to Uni and saddle yourself with a lifetime of debt - and for what material gain? Or become a celebrity.

Monbiot points out that after watching and listening to interviews with celebrities you can work out that the principal qualities now sought in a celebrity are 'vapidity, vacuity and physical beauty'. An


empty but attractive template on to which anything can be projected -  not least the dreams and hopes of the young. The cult of celebrity has become the new opiate of the masses. And yes there is a symbiotic relationship between this new cult and the forces of the market. Corporate capital has become ever more remote and faceless. The master is now the hedge-fund management team whose corporate identity is concealed in a computer file in a tax-avoiding British Virgin Island office. There is a vital need for a softer image, the seductive mask of feel-good celebrity. So unregulated corporate capitalism in our neoliberal nirvana has pulled out one humdinger of a Christmas plum! The lure of transcendent fame. How else to explain the mass delusion among the young people who (we assume!) are not following the road to Uni that they have a reasonable chance of becoming a celebrity?

And then came a third major role. Lo! an unexpected and utterly unpredictable star appeared in the skies over America. And its name was Trump. Celebrity and politics had become bedfellows and half the world sang hosannas - whilst the other half gnashed their teeth.


All of which brings us back to the riddle and the focus of the second part of this blog - the death of local communities. My focus is on the UK but its worth making the point that Trump's victory at the polls owed a great deal to support from alienated white voters in 'rust-bucket' states who were seeing their communities destroyed as their industrial base collapsed without any effective federal support from Washington. Republican opposition in both Houses had effectively stymied any Obama initiatives  for eight years. And Trump clothed himself in a Republican cloak and there was a new hope ...

Here in the UK the death of local communities is intimately linked to the politics of Austerity and the neoliberal misgovernment of our country by ideologically-fixated Tories since 2010. Tom Crewe is my second key source for this blog. Writing in the 'London Review of  Books', again just before Christmas (15.12.2016), his piece is titled 'The Strange Death of Municipal England'. His analysis is startling and begins with the claim that finds ample justification in the rest of the article. 'Britain is the most  centralised country in the Western world'. Political life is increasingly dominated by Westminster with the authority of Parliament now overwhelmingly superior to local authorities - and the executive power of the Government exercising more control than ever over Parliament. Money is the key. Of every £1 raised in taxation, 91 pence is controlled and allocated by central government.

The failing Austerity programme that has shaped our economy and society since 2010 has seen a significant part of the responsibility for deficit reduction transferred onto local councils which account for around 25% of total government spending. As a result, local authorities have seen their spending reduced by 37% since the start of the decade. All this sounds the death knell for local  communities. 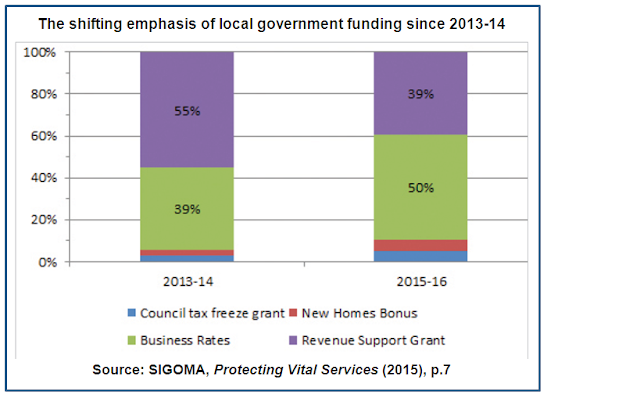 Tom Crewe points out that the creation of the British state was in part a municipal project. Elected town councils in England and Wales were created by the 1835 Municipal Corporations Act. It took a further five decades but by the end of the 19th century an acceptance of' the need for 'municipal  socialism' saw local authorities acting on their own initiative in the name of welfare. Slums were cleared; houses built; parks, hospitals, museums, libraries, swimming pools, and playing fields were opened. But the slash of Austerity from Westminster has wrecked the capacity of elected local authorities to provide and administer many of  the features of the state as it was once understood before 2010.

Yet local councils in England still have a statutory duty to provide libraries, social housing, accommodation for the homeless, schools, youth services, cemeteries,  buses, parks, rubbish collection, housing benefit, and social care for children, elderly and disabled people to name but the most obvious services. No surprise, then, that there are so many stories of the effects of local council spending cuts since 2010.

One instance for you to consider:

Between 2010 and 2015, £4.6 billion was cut from adult social care budgets. By 2014, nearly 90% of English councils were unable to offer any support for people with so-called "low to moderate" care needs. This means that today around 2 million older people rely solely on support from friends and family. The poorest and most vulnerable of those in need without such support now rely on an increasingly threadbare safety net, according to the King's Fund.

There is no end in sight. Local councils have a further billion pounds of cuts planned for  the current year with more to come. By 2019, the gap between needs and resources will reach an estimated £2.8 billion, and spending on adult social care will fall below 1% of GDP. As a consequence, our NHS can no longer safely discharge patients into the community, leading to bed-blocking and a crisis in hospital administration.


The statistical picture that Tom Crewe presents is relentless in its sweep. Housing services budgets that, inter alia, pay for the shelter of homeless people have been cut by 23% since 2010. The number of families that have been identified as homeless has increased by 42% in the same period. Youth services are quickly becoming a thing of the past with 600 youth centres closed since 2010 and £387 million taken out of youth budgets. Go on to the LRB website - using this link here - and find the article for still more insight into this devastating neoliberal assault on the municipal achievements of the past. This is the remaking of our country in the twenty-teens. Historians in the future will have the task of teasing out interpretations to explain how and why the electorate colluded in their own harming.

I'm sure you have already solved the riddle for yourself. Yes, it's the unregulated market. What once even Tories acknowledged as the 'unacceptable face of capitalism', has now become the rationale for the neoliberal ideology that drives the modern Conservative party. The primacy of Celebrity Culture within our society and the imposition of Austerity upon our systems of government, national and local, have had dire consequences. We are, in a word, diminished.